P is for Paris

Considering I live in Switzerland ,Europe is still an underdog in this travel challenge, so let's do something about it. Sorry, Philadelphia and Pittsburgh, today's letter P goes to Paris!

If you live in Western Europe, this is the train you're going to take to get there (because you want to avoid flying into and from Charles de Gaulle International Airport at all costs.) 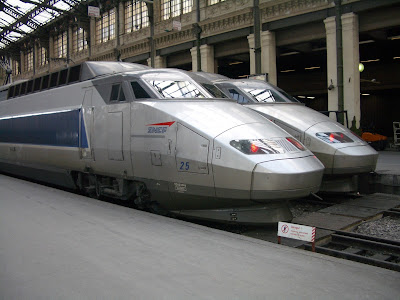 
Before showing you the pretty sights of Paris, I'd like to kick off this post with my favorite movie playing in the French capital, called forget Paris:


Billy Crystal plays Mickey, a basketball referee who has to accompany his estranged father's body to France, where the old man requested to be buried with the other members of his D-Day platoon. Unfortunately for Mickey, the airline loses his body. Fortunately for Mickey, this leads him to meet Ellen (Debra Winger), an airline executive who takes personal charge of the case and even joins him at the funeral. A whirlwind Paris romance leads to marriage, but that's when the complications begin...

One of the quotes is 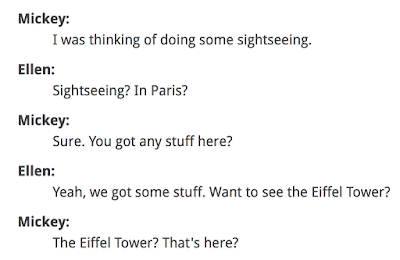 Haha, yes, that's here! And it's huge; it won't even fit into your picture! 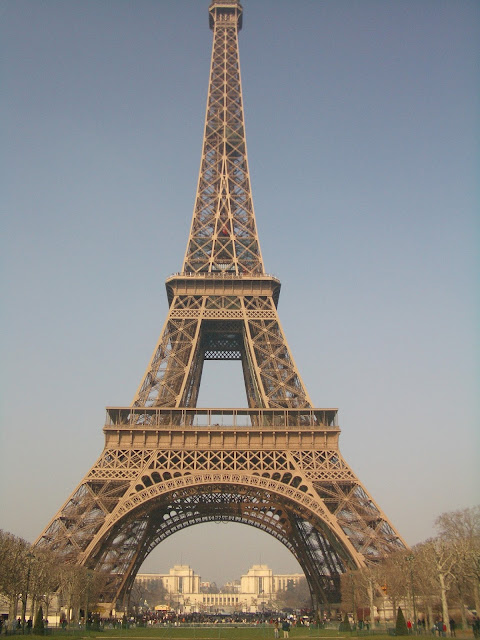 But it's also crawling with tourists, and like at any decent attraction, the wait is long, the staff is rude, and the tickets are expensive. Plus, once you're finally up there, there's fence ruining the pictures you were about to take.

So in my humble opinion it's not worth it. Take your pictures on the ground (not that there aren't a million annoying tourists standing in your way, too...) and be on your way to the Arc the Triomphe's panoramic terrace... 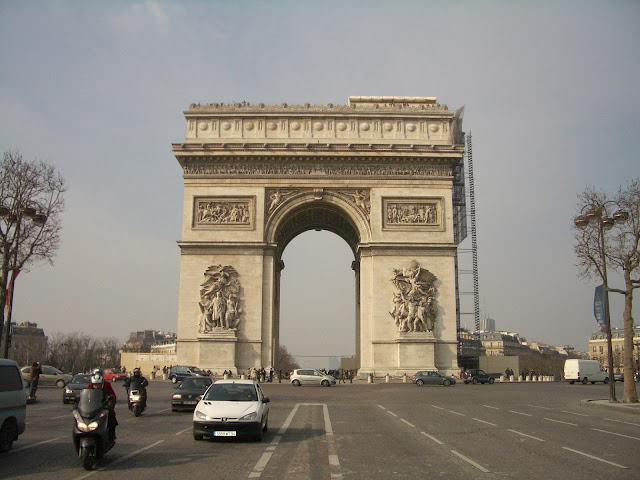 from where you will you'll have a fantastic 360° view over all the twelve avenues. If you follow Avenue de la grande Armée for about 4 miles you'll arrive at La Défense, the Business District, and if you look closely you can see that they have the modern equivalent of the Arc de Triomphe, la grande Arche. 100 meters (360 feet)  tall, it has double the height of its older buddy. 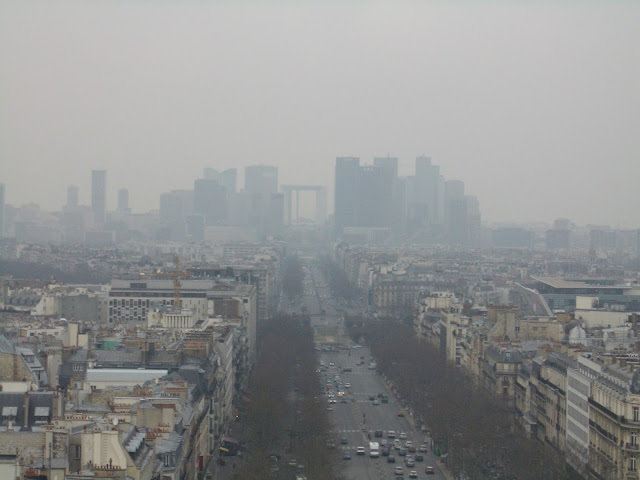 Looking to the other side there is your favorite 130+ year old tower again. 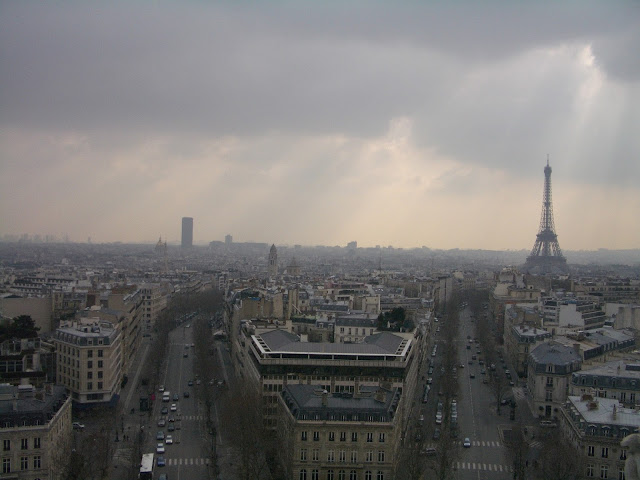 I was talking about the twelve avenues leading away from Place de l'étoile (star square) which for some reason they prefer to call Place de Charles de Gaulle. This is what is looks like, pretty neat, huh? 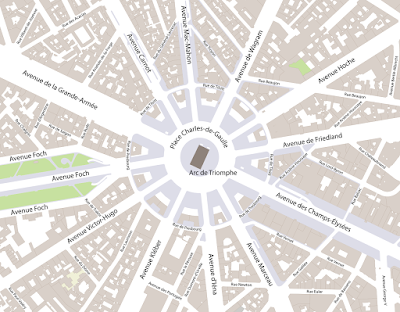 The best known of the Avenues is Champs Elysées, (the equivalent of NYC's 5th Avenue) leads to the Obelisque at la Place de la Concorde. The Luxor Obelisk is over 3,000 years old and was originally situated outside of Luxor Temple, where its twin remains to this day. 1833 it was given to France by Muhammad Ali Pasha, Ruler of Ottoman Egypt. 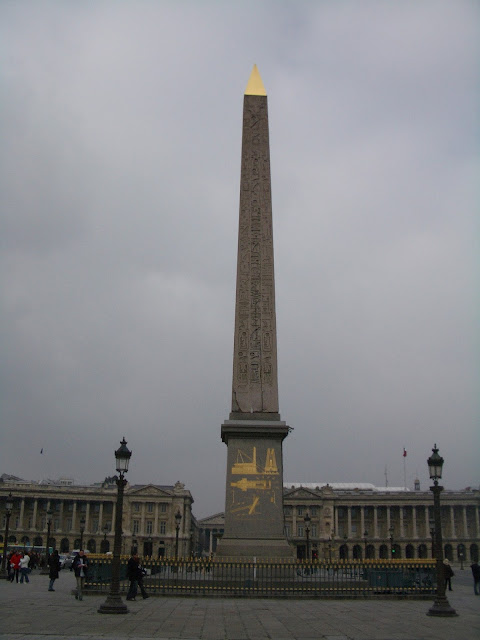 Off the top of my head the following are must sees if you're in Paris. The Opéra: 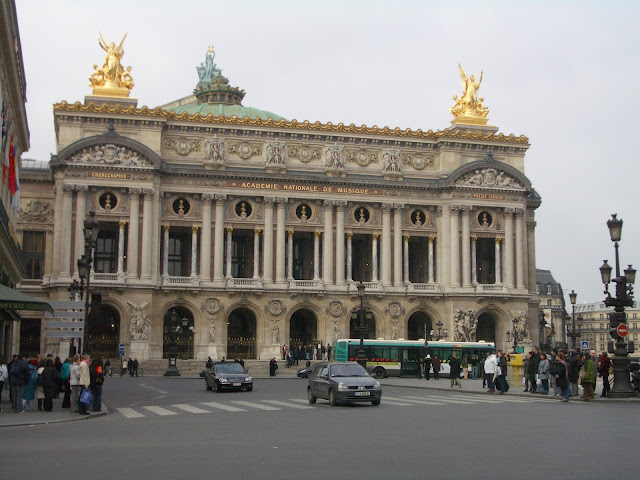 Before we continue let's do a quick quiz: what is the difference between Byzantine and Gothic architecture, and can you name an example?

The characteristics of Gothic architecture are stone structures, large expanses of glass, clustered columns, sharply pointed spires, intricate sculptures, ribbed vaults, and flying buttresses. One of their main characteristics is the ogival, or pointed arch.

La Géode the mirror glass ball IMAX movie theater at Parc de la Villette that hosts Europe's largest science museum. It may be tmi but I got so sick in there. They were playing an underwater movie. Fish were coming at you from left and right, from below and underneath you, striped fish, dotted fish, checkered fish. I had to run out and sit down...

Le Louvre  - just like the Eiffel Tower I know you want to go there and say hello to Mona Lisa, and by all means, do it! She's the tiny one, hidden behind bullet proof glass, surrounded by crowds of excited people taking pictures. She's not even smiling all that happily. You may just hang out in front of the museum and enjoy the pyramids.

If you're still up for some paintings, visit la Musée d'Orsay, housed in a former railway station (that alone makes for a pretty cool experience) and see some impressionists like Monet, Manet, Degas, Gaugin and Van Gogh, yes, the Dutch guy. I was there for my college graduation trip, and the guide, pointing at some random paintings, all of which featured angels, asked if we thought angels were boys ore girls? What do you think? I'll tell you her answer at the end of this post.

Everybody probably has something in mind about what Paris must be like. Artsy, romantic, lively?

There are also not so nice aspects about it. Home to 21,500 people per square mile, (more than double than NYC, and almost three times as dense as Hong Kong) Paris is a pretty crowded place, and actually there is not enough space for everybody, so you'll meet  lots of the homeless folks in the subway halls and at the touristy locations.

How did you like Paris through my eyes? I feel I only showed you a fraction of what the city has to offer, (I didn't even mention Les Halles = shopping paradise right across the Centre Pompidou, or Versailles the royal castle with a lovely park) but hey, come and visit yourself!

Tomorrow we'll keep speaking French - in a slightly different dialect, though. I'm taking you to Québec! You game?