May Secret Subject Swap - The Force

Welcome to Mays Secret Subject Swap. Again 10 brave bloggers picked a secret subject for someone else and were assigned a secret subject to interpret in their own style. Today we are all simultaneously divulging our topics and submitting our posts.

How is the force with you?

It was submitted by: My Brand of Crazy - thank you, Sarah!

They moved from NYC to Switzerland earlier this year and seem to get the hang of it.

We believe to have witnessed Caroline and her college boyfriend Jeremy holding hands at the ICRC's St. Patrick's Day party and when we last left off, we found out Victoria's friend's older sister Marietta is pregnant.

Other than that I haven't heard much.

Until today. Caroline forwarded me the following: 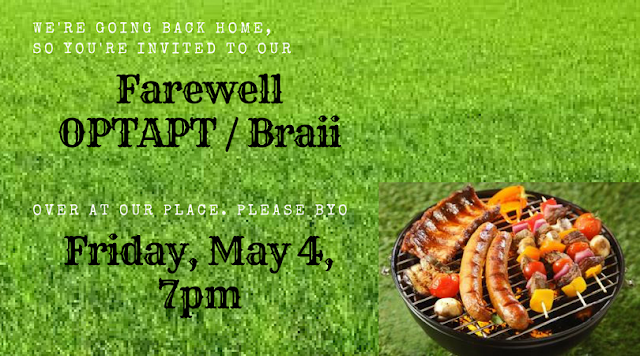 So I called her.

Haha, they're South African, right? What they're having is a yard sale, and if you want to dump some of your clutter you're welcome to bring it. Either way you're supposed to bring your beverages to the BBQ, or braii as they call it.

The origin of this goes back a couple of years. An expat family was leaving Switzerland, and they needed to get rid of their ski equipment, ice skates, anything winter really because their next destination was Dubai, so they invited the neighbourhood over to see if anyone might be interested in their stuff.

It turned into a swap. People kept asking "do you have those in a larger size", and "do you still need your roof rack?" and then other people would pitch in and disappear into their basements across the street or down the block and reappear with their gear.

They ended up repeating this kind of event every time a family was packing up and leaving, and they called it OPTAPT = One Person's Trash is Another Person's Treasure. It was particularly appreciated by the new neighbors as it didn't stop at exchanging items.

Among the expat community there was a great wealth of ressources: doctors and dentists, babysitters, German tutors, cleaning ladies, countless phone numbers and stories about encounters with local authorities, neighbors and teachers were typically being shared ad cherished,

For all those reasons I urged Caroline to attend this party, and to bring her notebook.

I even contacted the family whom I met on a couple of occasions and asked if they minded my saying goodbye in person? If I was honest, I loved those parties as well, and usually a native Swiss came in handy at some point during their discussions. Plus it's a networking opportunity.


As I turn into the street where the family lives, I'm frozen in schock. I haven't been aware that they were basically next door neighbors with the art dealer family whose son, then in his late 20s, not only killed his friend the night before New Year's Eve 2014, but also assaulted  and raped his girlfriend. He was sentenced to 12.5 years in prison. Additionally he had to pay 130k to his friend's family, plus legal costs. Still I felt he got off easy.

Their villa had been on the news all the time back then, but I never realized how close it was to the Johansson's, my South African family.

I wonder if the killer's parents still live there. If I were them I would want to move far, far away.

"Hey Caroline and David, how are you guys doing? Where are the kids?"

Duh, Victoria and Max were attending a Star Wars themed party a schoolmate was throwing. Good for them to mingle with their friends!

The party was in full swing already, and almost everyone I said hello to had a large bag filled with items they took off somebody's hands. Such a great opportunity!

"Hey Tamara, don't you live in Aargau?" Jessica, Marietta's Mom approached me. I sure am!
"We were just gossiping about that fellow who used to live over there, you know the one who whacked his friend?"

Yeah, I was thinking about him, too.

"Is it true he may be released soon?" Whaaaat? I had no idea, but it is customary to release inmates for good conduct after serving 1/2  or 2/3 of their sentence. Still it would be super premature?

"It may just be a rumor then. However, they put that guy who lived near you away for good, right?" They sure did, and I'm so glad. We don't have many homicides in Switzerland, so if there is one, people follow cases closely. I was more interested in hearing how Marietta was doing, though.

Jessica shrugged her shoulders. "You know, I think she's in denial. She is so happy and careless, I don't dare to crush her romantic idea of having a baby, so we'll just take one month at a time."

Sounds like a plan. I wonder if it's inappropriate to ask who the Daddy is and what their plans are for the time after the baby is actually here?

As if Jessica had read my mind she said "you know of course there are a lot of questions and loose ends, and you might actually be able to give us some advice, do you mind if I call you next week, so we can get together?"

Let's do that. For now, we have to bid our friends goodbye

‘May the force be with you and us all’ shouted one of the guests.

I'll drink to that. Oh wait, I'm on antibiotics, and I can't drink. Also after having dental surgery I've been advised not to drink coffee, one for the hot beverage and two for the caffeine, both of which supposedly delay clot formation.