Use Your Words - International Festival

May 11, 2018
Today’s post is a writing challenge. This is how it works: participating bloggers picked 4 – 6 words or short phrases for someone else to craft into a post. All words must be used at least once, and all the posts will be unique as each writer has received their own set of words. That’s the challenge, here’s a fun twist; no one who’s participating knows who got their words and in what direction the writer will take them. Until now.

They were submitted by: Southern Belle Charm  - Thank you, Minette!

The family of four plus dog moved from NYC to Switzerland earlier this year and seems to get the hang of it.

We believe to have witnessed Caroline and her college boyfriend Jeremy holding hands at the ICRC's St. Patrick's Day party, and we found out Victoria's friend's older sister Marietta is pregnant.

Last week the Millers, as well as the Howards, along with a dozen other expats families from the neighborhoood, attended the Johansson's farewell party before they were leaving Switzerland to go back home to South Africa.

Today I am meeting with Jessica Howard who is Marietta's Mom. She wants to pick my brain on how to go about her daughter's teen pregnancy and, more importantly, her life after giving birth.

"Tamara, this is Nicole Pelletier, she's from Newfoundland, Canada."

Ohmygoodness!!! This may be a long shot, but are you by any chance related to Pascal?

"As a matter of fact I am, he's my husband's cousin. Nice to meet you! Jessica told me you're a hockey mom."

Pascal Pelletier plays hockey for the ZSC Lions here in Zurich after being on the Cannuck's team roster. And the Blackhawks', and the Bruins'. How exciting for Max Miller - and my son Colin ;-)

Turns out Nicole, her husband Joël and their daughter Cloé, moved into the Johansson's house a couple of days after the party.

Joël is supposed to start his job with ETH Zurich, which is our Institute of Technology. For comparison's sake, let's call it our MIT - I actually found an article stating that the quality of education is equivalent, if not broader. There!

So the aim of Joël's work is to deepen our understanding of how neurofeedback modulates neural processing and behavior. Sounds straightforward, right? Hahaha.

Nicole's first concern is to get Cloé into an international school.

"I applaud the Howards and the Millers for sending their kids to local public school, but I still  want to explore our options, and I was wondering if you had any recommendations? Cloé is supposed to start middle school after the summer break, and with her speaking French and English I don't want to ask of her to attend full time German classes."

OK, hold on. First of all, great for Victoria and Kyra, they're going to get a new friend. Second of all, how on earth can Nicole be an eleven year old's Mom? She looked so, well, young, herself!

"I know what you're thinking. I had her when I was only 16. I still need to finish my own eduction, and I'm gonna need your help for that as well!"

What were the odds. A woman who went through the exact same thing that Marietta was facing today! Pretty awesome.

So, Nicole, here's what I think: you might want to check out ICS (Inter-Community School) in Zumikon. It's only a 10 minutes' drive from your home as opposed to at least half an hour to Zurich International School in Adliswil which is across the lake. Although taking the ferry to go to school is a pretty cool commute, right? 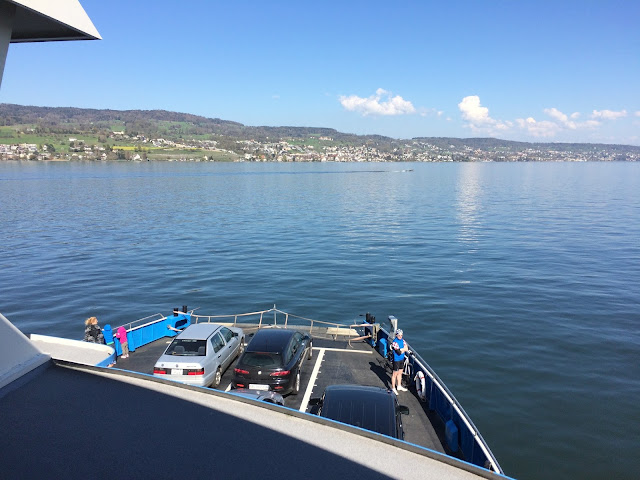 Crystal, a friend of mine had both sons attending ICS for four years. She's told me great things about the academic portion as well as the social part. The fact that tuition costs were part of the husband / dad's compensation package helped.

Why don't we stop, order coffee and sit down, and I'll show you some pictures of their end of school year celebration. We used to attend ICS' annual international festival while my friend's sons still went to school there.

It's a day full of fun, food, flags, games and yard sale. One year I was lucky enough to find cleats and original Brazil and Germany national soccer team jerseys for no money at all!

In 2012 is was a gorgeous sunny day, so everything was taking place outdoors. 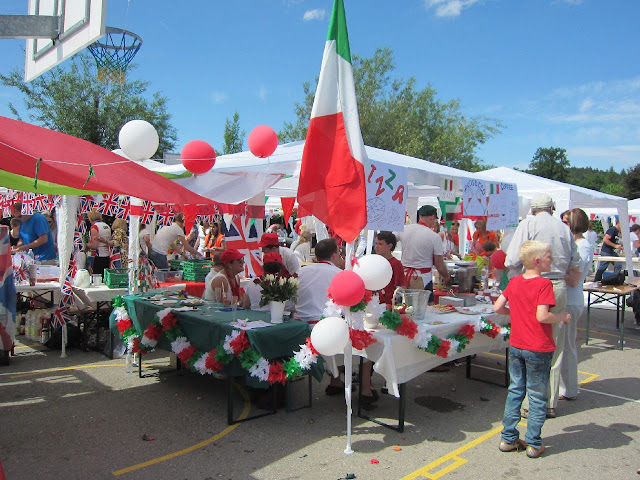 Colin, then four years old, was in hockey heaven! 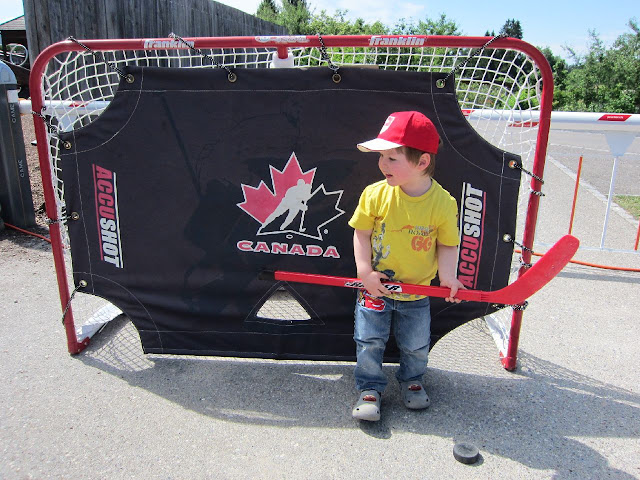 2013 it was raining, so they put up tents, and most activities were taking place inside. People were still having a blast! 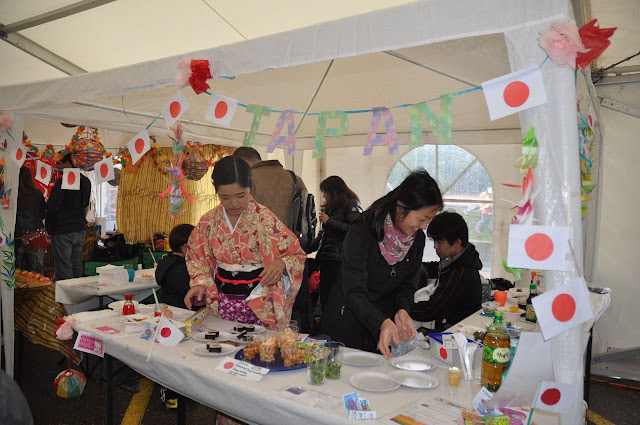 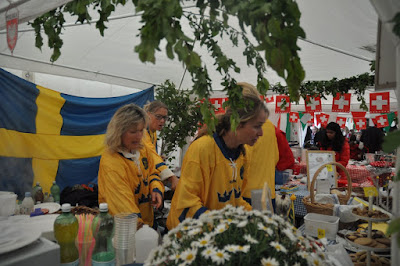 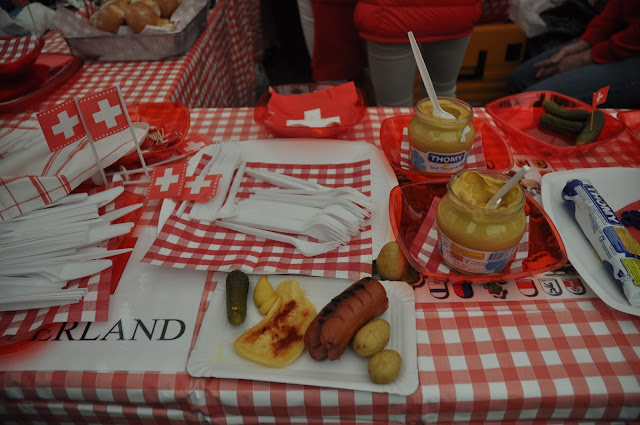 We didn't make it to the festival for a couple of years since everybody we used to know, moved on or moved back home, but last year it was such a nice day, plus Colin grew out of his sports jerseys, so I went anyway, all on my own! 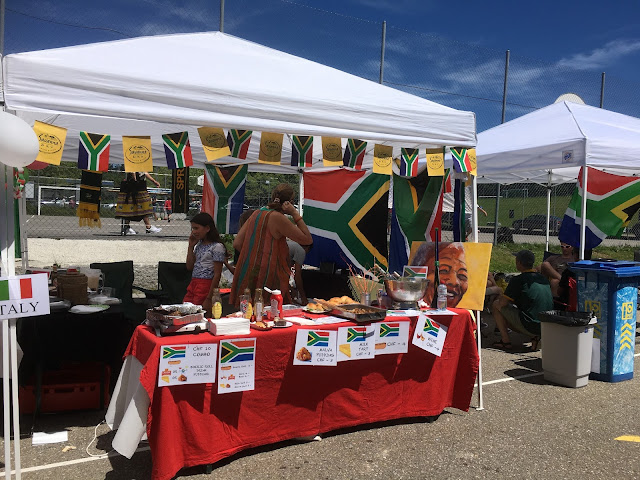 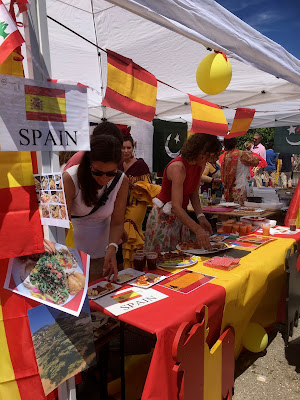 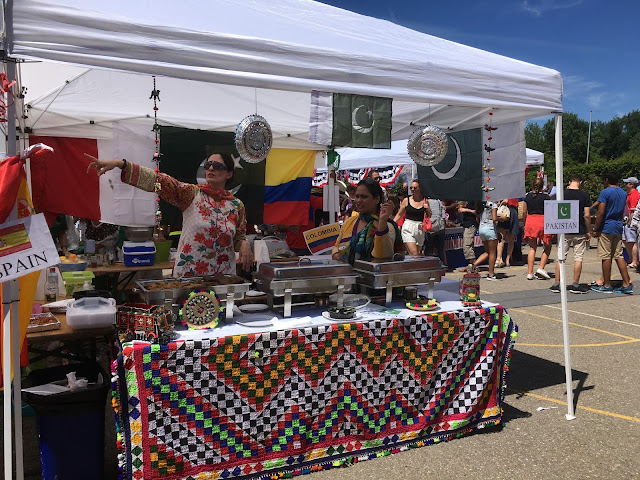 I can only imagine how awesome it must be growing up in a diverse community like this one! I hear that many kids who met here, are still in touch, visiting each other all across the globe. 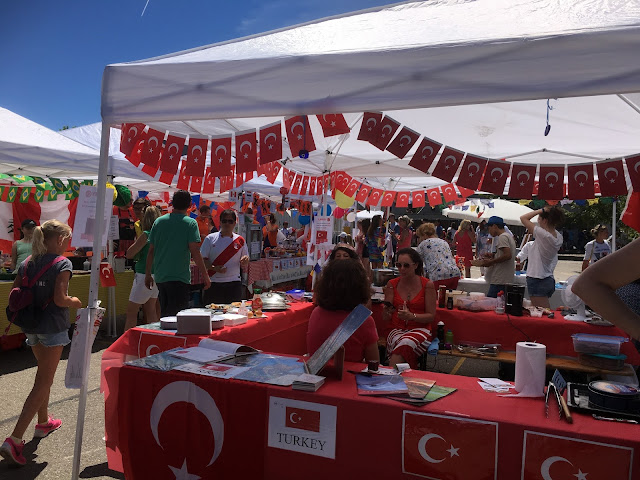 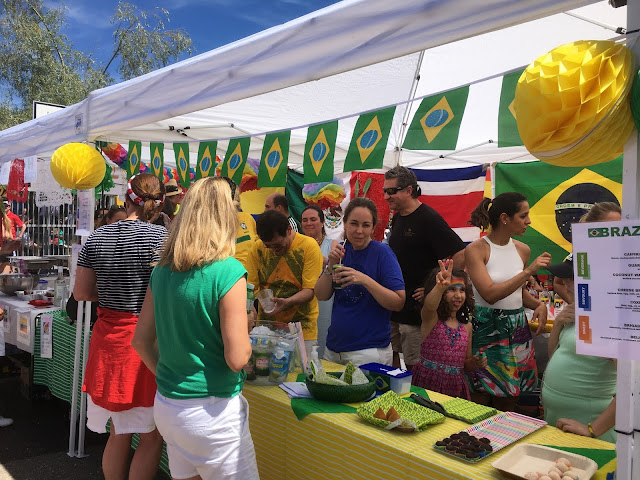 So many specialties to sample, and not only were they yummy, but the people did a wonderful job decorating their booths. 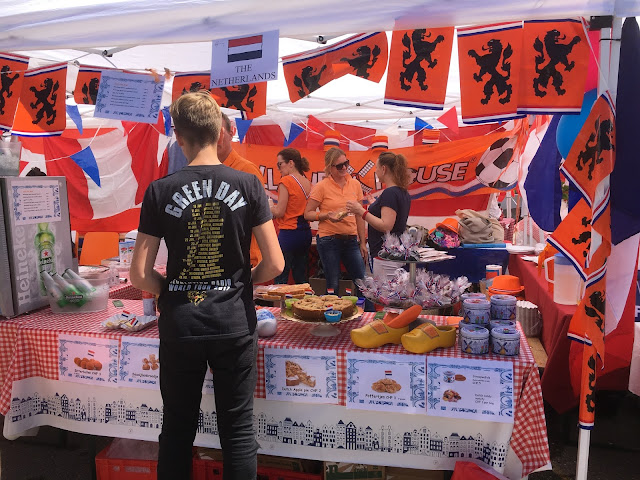 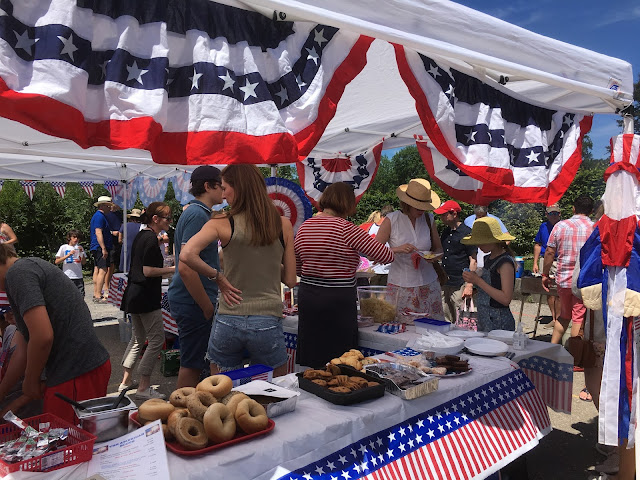 What a fantastic event, once again!

The only bummer was the yard sale. I arrived mid-afternoon, and there was almost nothing left. "People were scavenging on the stuff like vultures" the boys minding the nearly empty area told me. 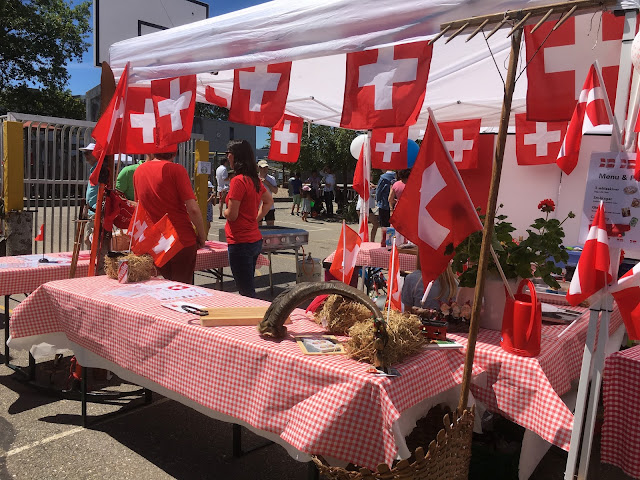 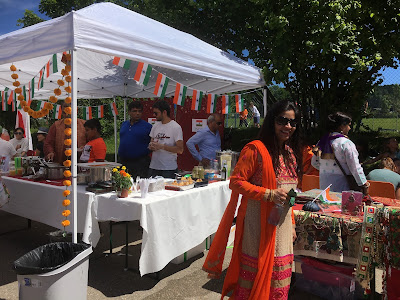 The Russian kids performed a traditional dance. A cute and impressive scene at the same time. Way to pay tribute to their heritage! 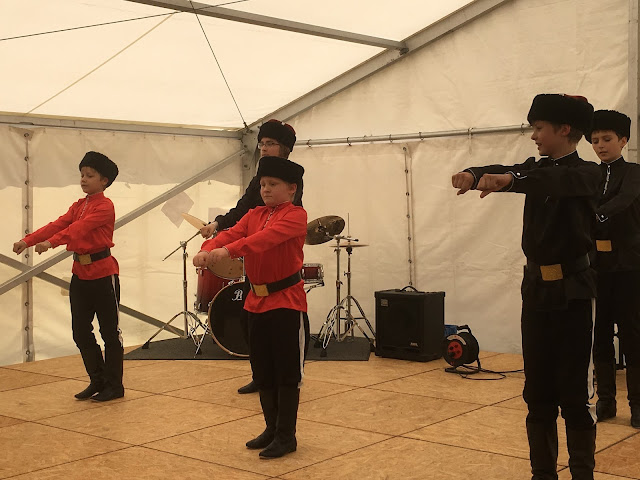 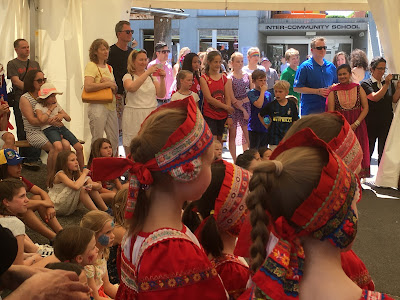 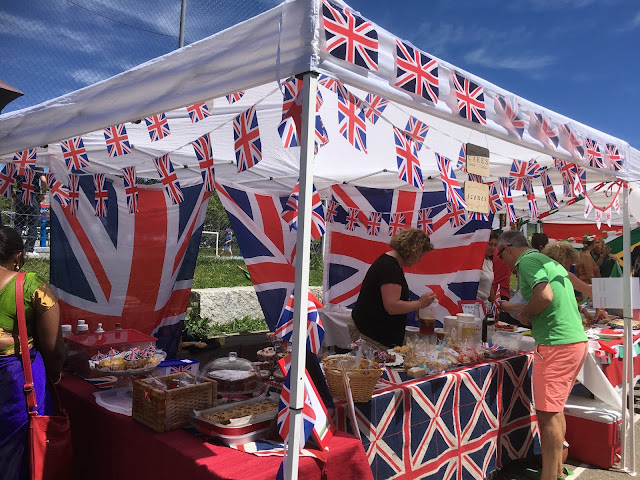 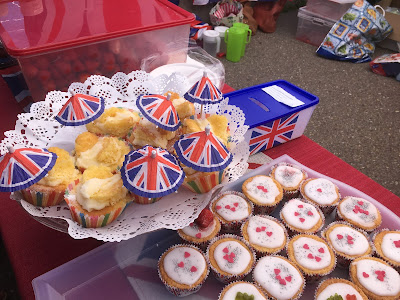 You can feel the fantastic atmosphere just by looking at the pictures, can't you? There is an amazing sense of camaraderie going on among the kids and parents.

If you're looking for a good time, I can highly recommend this festival! In addition to the organized games there is also a regular playground.

This year the event is taking place on Saturday, May 26 between 11am and 4pm.

Enter "Strubenacher 3, Zumikon" into your GPS, and there will be parking guides helping you finding a spot. 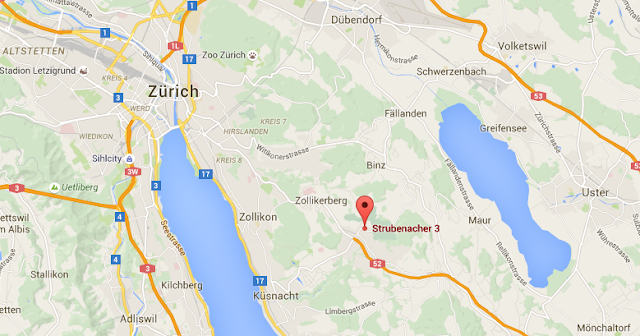