She is going to ask "did you physically cause Shanann's disappearance?" What might possible answers be? Chris plays innocent and suggests things he knows from movies or what awful things you read that evil people did: hire a hitman, use a weapon like a gun or a knife, kidnap, smother or poison the victim,...

She goes on explaining why she will only ask about the physical involvement because obviously if you tell someone you don't love them anymore and you want to separate, you may somehow emotionally  have caused the person to leave because their feelings were hurt and they took off, but it didn't mean you did something that physically hurt (or killed) them.

"Are you lying about the last time you saw her?"
No - she was in bed, alive.

"Do you know where Shanann is now?"
I do not.
They discuss that if Chris had killed and dumped her, he would obviously have seen her at the location where he left her dead body.

There are going to be questions on the test that he is actually supposed to lie about because she wants to see his body's reaction when he lies. Those questions are:


In order to also create a baseline for when you're totally telling the truth, there are some "Known truth questions":
Chris gets hooked up on the instruments (I'll talk about them below), and they do a portion of the test they call the "directive lie practice test":

Tammy shows him a chart with numbers, and he has to write down the number three on the clipboard. She proceeds to ask him if he wrote every number, and he is supposed to lie about having written the number three.
He tries to be funny and show how truthful he is, so he goes "nnn-yes, I mean no." Haha.
Now things are getting serious. Here are the instructions: don't move as in sit still and don't fidget! No sniffling, no sneezing, no nothing. If I tell you to be still don't go "ohmygosh, I'm sorry." Just be still. Don't look at me, look at the clipboard. And remember, just yes or no.

After this part is done, she goes all cheery on him. "You did great, you remembered to lie and everything, that was awesome!"

Chris chuckles nervously. He'll have to remember to lie some more in the main portion of the test!!

"So obviously you're a really bad liar, have people told you that before? Like on your face and everything, I can see a significant reaction when you lie, so thank you for being a horrible liar! So on the real test if you lie about your wife that'll be ten times more amplified."

Ohmygosh, now would be a good time to come clean, Chris!

They go ahead with the actual test, and she tells him there will be at least three runs, and if he's moving or something else disrupts the readings they can go up to five times.

Tammy is really looking forward to this:

"The coolest thing is that right now there's only one person in the room who knows the truth - in about five minutes there's gonna be two. Any questions before we start?"

Tell her!! Tell her now, you fool!

After the first run she asks if he has any issues with the "hot" questions, (because obviously she can already clearly see he's not telling the truth), and she repeats everyone of them:

So you know the rest. They present him with the results "you failed" and Chris still tries to be like "that can't be, I didn't do anything, I swear."

After speaking to his Dad he at least confessed to killing his wife.

Now, we all want to know: how does the technical part of detecting lies work?

They hook you up to the following instruments (Source: The Fundamentals of Lie Detector Testing): 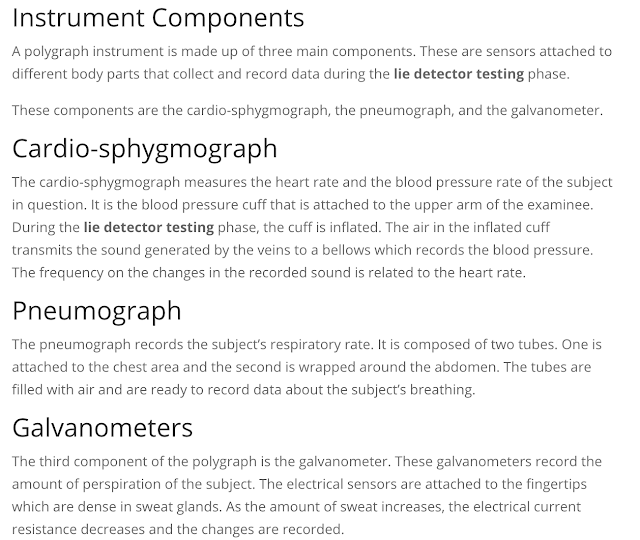 The polygrapher scores the test by comparing physiological responses (breathing, blood pressure, heart and perspiration rates) to probable-lie control questions (example "Before 2018 did you ever lose your temper with someone you cared about?") with reactions to relevant questions (example "Do you know where Shanann is now?")

If the former actions are greater, the suspect passes; if the latter are greater, he fails. If the reactions to both questions are the same, the result is called inconclusive.

The irrelevant questions (example "is your first name Christopher?") help to provide a baseline for your regular calm self - however they are not scored at all and just serve as buffers between relevant and control questions.

There are all kinds of articles and videos out there that tell you how to "ace" a lie detector test, but guys, I don't know, if you're a regular person who committed a once in a lifetime crime and try to cover it up, how can you play it that cool?

Now I like to think if you're either a full blown psychopath (and we'll talk about them and how sociopaths are different next week) or a trained professional you might beat the test:

There was this guy Aldrich Ames, a CIA counterintelligence officer who committed espionage against the U.S. by spying for the KGB. He passed two polygraphs. I am not overly surprised though, because isn't a government agent supposed to be great at lying and deceiving people?


As I said in the beginning, polygraph tests are controversial. Obviously they can cause false fails and stuff. If you're a defense lawyer like to one who worked for Scott Peterson you are going to have your client refuse to take the test, claiming that even if you pass it, the polygrapher will tell you it was inconclusive.

Shouldn't an innocent person do everything to cooperate? If you have nothing to hide, can't you go answer a few questions?

I really don't know - what do you think?