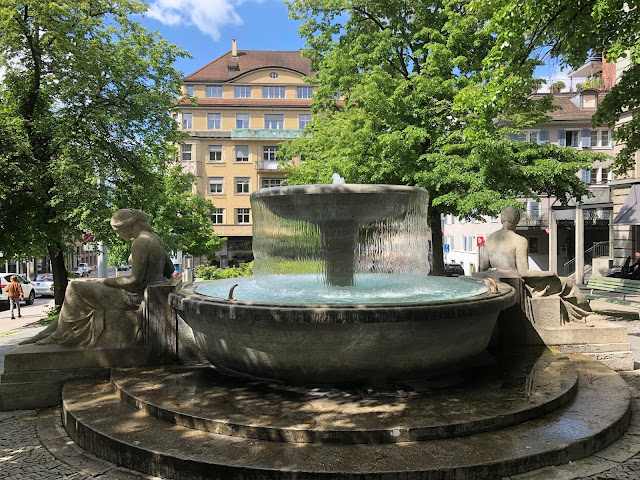 Welcome back to the letter N of my Swiss themed A-Z.

N stands for our country being neutral and its citizens being neat.

Switzerland prides itself on not interfering in other countries' armed conflicts, but to provide diplomatic platforms to discuss peace efforts.

Many international organisations such as the United Nations, the Red Cross, Médecins sans Frontières, you name them - they're located in Geneva, Switzerland.

Our military neutrality was established by the Treaty of Paris in 1815. While we are neutral, we still treat ourselves to a decently staffed, equipped and therefore costly army - for defense's sake.

Let's not kid ourselves, though. Over 30% of Swiss weapon exports, worth around CHF (=USD) 140 million, are bound for countries involved in either internal or international wars, such as the U.S., Turkey, India, Pakistan, Russia, Israel, etc.

Speaking of... Last spring, the (then acting) Swiss president of our federal council, Ueli Maurer was invited on short notice by the Donald. He made a complete fool out of himself and represented Switzerland poorly.


Withe House - really? And "Präsident Switzerland"? You're either Bundespräsident Schweiz or President of the Swiss Confederation!

We have Ignazio Cassis, who is our federal councillor for foreign affairs. Very qualified guy, good at languages, too. Let him do the talking - and the writing for that matter!!!

What does Maurer do, though? Brings the DOJ's chief of communications. And I have an idea, why: they were mainly talking about nuclear deals with Iran.

Switzerland has an embassy in Tehran, Iran, that also represents the interests of the United States, aiding in the release of American hostages and crafting the joint comprehensive plan of action.


I'm not sure they really did talk disarmament, though, because the slogan that Mr Maurer used in his White House guest book entry "together ahead" is borrowed from RUAG. RUAG happens to be a Swiss company that develops technology in the fields of aerospace and defense.


But hey, "I can nothing say to this issue" Embarrassing.

Also let's not forget our "role" in World War I and II. Switzerland maintained armed neutrality and was a safe heaven for refugees, which is truly great. On the other hand, our banks were hiding Allies and Nazi gold. 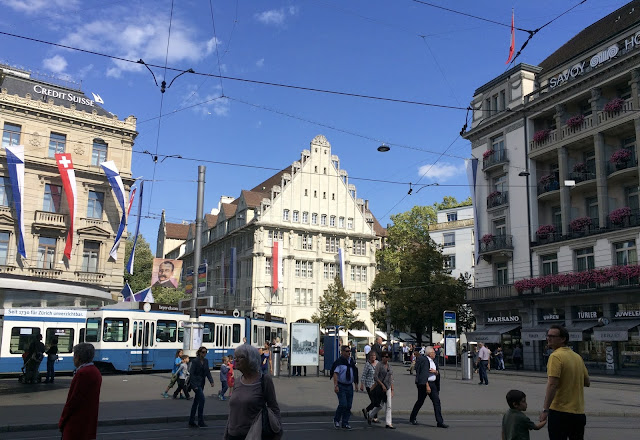 I feel like "being neutral" serves our politicians and economy leaders, and even us as a general population, as means to avoid confrontation and make money in the process. Makes us somewhat hypocritical and spineless.

Just recently another blooper came to our attention. To be fair, it's more than a blooper. It was revealed that Crypto, a Switzerland based manufacturer of encryption machines and cipher devices, was secretly owned by the CIA in a classified partnership with the West German intelligence. Ouch!!!

On to a less political topic:

This is a public underfloor garbage disposal in the city of Zurich. Your trash needs to be in a "Zürisack", a fee-based trash bag. 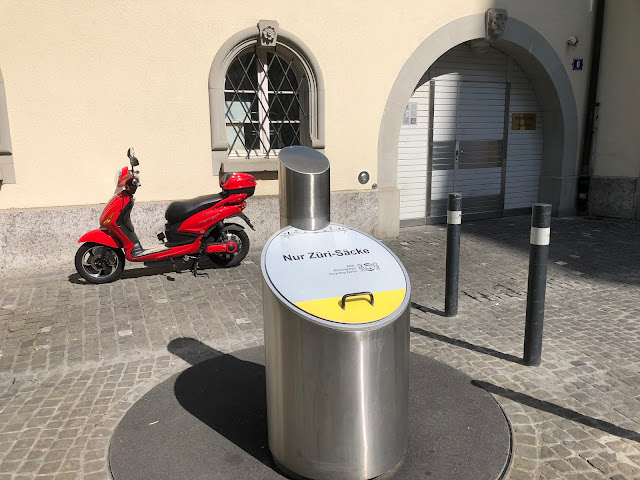 Building and maintaining one of those fancy receptacle costs between CHF (=USD) 40 - 50k!

You can drive straight into the large hangar-like space and dispose of your recyclables. Free of charge, except bulky items that don't belong to any category.

Every container is labeled and emptied several times a day. 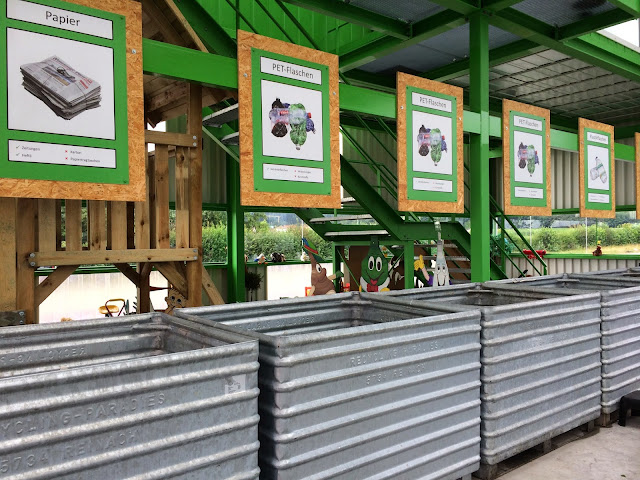 Even though we still have room for improvement - cigarette butts - I appreciate the effort that goes into keeping our country clean.

Since we're on the subject, let's talk butts.

What do the following dates have in common:
Answer: They are major milestones in Switzerland’s (non) smoking culture.

The 2005 date is when SBB (Swiss Railway Company) got rid of "smoker's wagons".

Up to that date there would be wagons equipped with red seats, where you were allowed to smoke. The green seating meant non-smoking, Of course there would always be passengers basically jumping on the departing train. Smoking cigarette still in their hands,  they would walk through the crowded green department to get to their red seats, where there'd be typically enough empty seats.

In 2010 the federal law against passive smoking finally came into effect, meaning no more smoking in the workplace as well as in public spaces such as restaurants, clubs, shopping centers, cinemas, airports and schools (really? I can't remember any of my fellow students smoking in class!?)

Prior to that you'd shower, get dressed up for a night out and end up coming home throwing all your smelly clothes in the hamper. Restaurants were the worst. Imagine you're hungry, you're waiting for your delicious meal only to experience your fellow patrons at the next table lighting up. Yuck!

Some restaurants had non-smoking sections. You'd walk through a cloud of smoke to get to your table, but at least your neighbours would leave your immediate air space clean.

As of the beginning of June 2019 -  there is no more smoking at railway stations, especially platforms. Or so I thought. I don’t use public transportation very often, but when I do, I'd certainly appreciate a smoke free experience.

Sadly the main reason to push for smoke free train stations was not to make it more healthy and convenient for the passengers. It was in order to save cleaning costs.


All the butt picking seemed to have added up to CHF (=USD) 4 millions a year. No wonder train fare is so expensive!

So what I thought was going to happen:

There'd be promo people, not students, more like senior security guard types, in yellow vests, handing out flyers that say "as of June 1st, there's no more smoking at the train stations, thanks for your cooperation and understanding. Please refer to the maps that display designated smoker zones." (Which would be in confined areas, far, far away from the main non smoking population.)

There'd be posters all over that say something along the lines of "we're cleaning up the air for everyone, thank you for not smoking at this railway station."

Now of course I was expecting too much. After all we're in Switzerland.

Instead here's what has been done:

Tons of trash bins with giant ashtrays on top have been set up all over the place:

At the entrance of the train station, which makes sense. An unimposing sign says "thank you for disposing of your cigarette here." 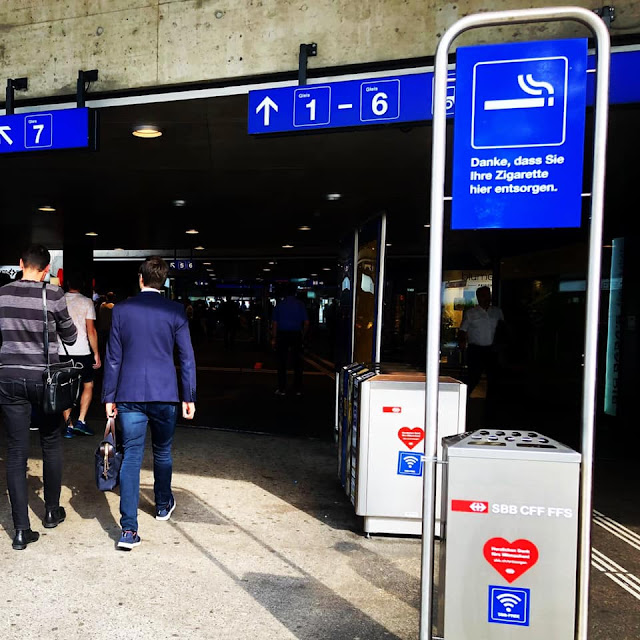 OK, catch flies with honey. No need to slap forbidden signs all over if people get the message.

Again at (tr)ash bins right at the front of every platform. For those who didn't think we meant  business.

Keep walking on the platform. About every 15 meters (50 feet) there's yet another ashtray.

Are you kidding me? So they're basically still smoking everywhere!?

They achieved exactly what they were aiming for: not having to pay for people who clean up the cigarette butts on the platforms and train tracks.

Never mind the passenger's well-being. Thanks for nothing.

You may know me as a very agreeable, peace loving person, and I am. The fun stops at smoking, though. I am a bit of a hardliner there.

What probably bothers me most is that "the smokers" (and there are really nice people among them, and I have friends who smoke, and I love them dearly, don't get me wrong) think it's their human right to smoke when and where they please.
I could go on, but you get the picture.

So the smokers say: "it's forbidden everywhere, where the hell should we go?"
And: "quit the effing patronizing already. After all we're financing your pension."

In Switzerland cigarettes are heavily taxed, and parts go in fact towards the state old pension. These days a pack of cigarettes costs CHF (=UDS) 8, and 60% of this price consists in tobacco tax.

On the other hand: us non-smokers (67% of Swiss citizens, mind you) finance their lung cancer (or Corona related) treatments with our health insurance premiums. Plus we cover for them at work when they take lenghty smoke breaks and when they suffer from yet another common cold.

So to wrap it up: smoking is a nasty, unhealthy habit. If you want or have to maintain it, do it where others aren't bothered by it. Thank you! You might appreciate the clean air yourself. 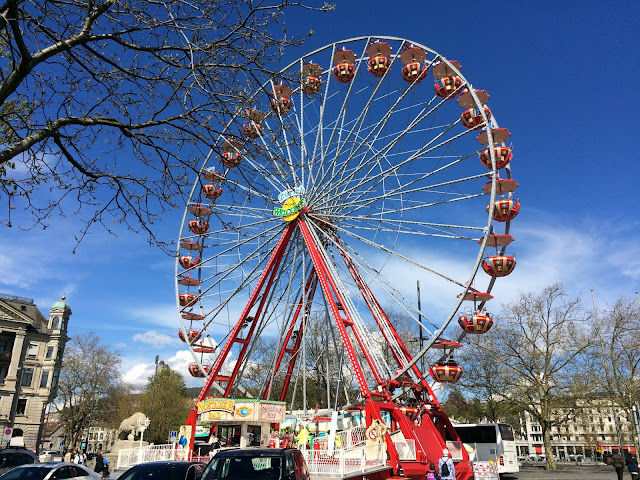 OK, what happened here, how did I get from Switzerland's neutrality to cigarette butts?

I hope you still enjoyed reading along and you'll come back tomorrow where I will tell you about opening hours and customer service in Switzerland.