Use Your Words - Crunch Talk

August 14, 2020
Today’s post is a writing challenge. This is how it works: participating bloggers picked 4 – 6 words or short phrases for someone else to craft into a post. All words must be used at least once, and all the posts will be unique as each writer has received their own set of words. That’s the challenge, here’s a fun twist; no one who’s participating knows who got their words and in what direction the writer will take them. Until now.

They were submitted by: Baking In A Tornado  - Thank you, Karen!

By the time this post goes live, our summer vacation as in school break has been over for a week, and kids went back to school. 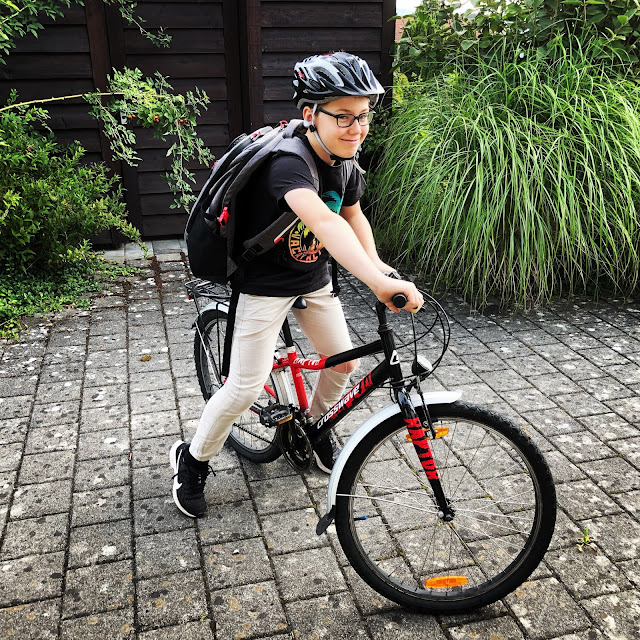 In a former post I talked about his new load in terms of subjects and number of classes (34 lessons). In the meantime we got the actual schedule, and looking at it makes me feel dizzy. He starts at 7:30am every morning, and only Wednesday afternoon is off.

Classes take place at different locations: the main school premises, the gym of another school, the kitchen of yet another school (yes, they have some kind of very basic cooking classes) the public pool at the other end of town, and occasionally the track and field stadium yet farther away. So they commute by bicycle, shlepping their bags and stuff, and let me tell you I see these kids on the street, and I don't like some of what I see. 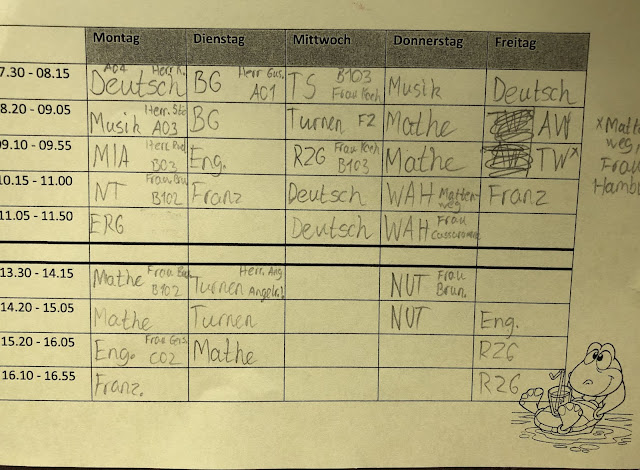 On the other hand this is his August hockey practice schedule: 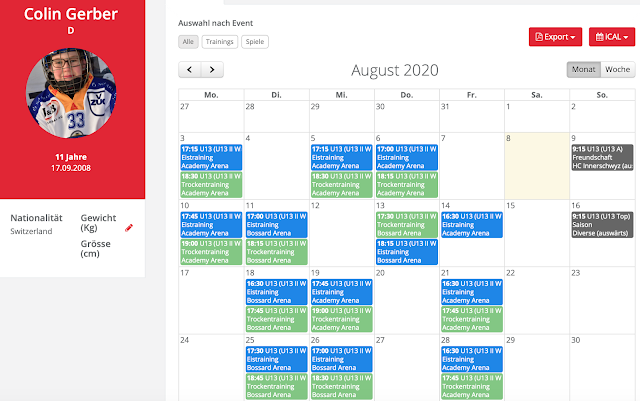 Our drive takes about an hour per way, and he needs to be in the locker room 30 minutes before ice practice starts. There's a lot of gear to put on!

So if practice starts at 5pm we pretty much need to leave at 3:30pm. How is this ever going to work?

My long-time friend Andy, who is in charge of the  hockey youth program, pulled out his standard letter addressed to schools pointing out the importance of sports as a meaningful hobby, and that the young players are expected to make it to practice on time, so will the school please allow Colin to leave early on specific days?

While applying for exemption used to be a bit of bureaucracy in elementary school, it was never a problem to get our way, and C never had to work a lot outside of class anyway.

Long story short, we got invited to a meeting crunch talk with the principal (whose predecessor had only just vacated his position a few weeks ago, so the new guy wanted to mark his territory and take a hard line), the president of the school board plus two of Colin's new teachers, and they went from originally stating "only high level performing athletes may be excused from class" to "OK, you'll get the chance to pursue your passion as long as you are taking care of homework and catching up on missed classes independently."

Turned out we had Andy to thank for this change in attitude.  Upon responding to our principal's call, Andy did a great job convincing him that a sports team does not only consist of top-rating athletes, but they need regular players too, and as long as these young people are students, they need a way to do both, study, and practice and play.


We were so happy and relieved to hear the great news! If they had said no, C would have been able to attend only half of the training units and would quickly drop to the bottom of the list when the time comes for the head coach to pick players for lineups.

However, now the next challenge begins, and all of us bend over backwards to make things happen.

I am lucky enough to work for my husband, allowing me to adjust my work schedule.

Colin leaves his bicycle at school, I get to borrow hubby's car (because no two hockey bags fit into my car's trunk), pick up Colin at school, he eats a snack in the car, we pick up his teammate a couple towns away, we drive some more, they train, they shower, I spend my time at somewhat cool-ish places stuffing my face while it's 35°C (95°F) outside and we aren't allowed at the arena due to the pandemic, we drive home, they wolf down their sandwiches in the car, we drop off his friend, I drop off Colin at school so he can take his bike home, I park hubby's car back at the office, take my car, drive home, we unpack his bag, I do laundry, Colin does homework, we go to sleep.

The next day we do it all again.

Imagine my surprise when one late afternoon, just as I pulled in to drop the boys off at the arena, a fellow Hockey Mom called and asked whether I saw the message on time?

The one that says today's ice practice is taking place one hour later than usual.

No, can't say that I did. I keep the phone in my purse while driving.

I checked the message later and expected something like:

"Folks, our coach is stuck in traffic and won't make it until an our later, so sorry, please stick around, thanks."

Yes, he even forgot to say takes place.

So what better way than to unwind on the couch enjoying some freshly baked chocolate chip cookies - crunchy on the outside, soft and chewy on the inside.

Who are we kidding though. This Hockey Mom does not have time to bake cookies these days. The idea does sound nice, though, right?

So we are one week into the new school year, I have one kid, and I am exhausted.

I am aware that I am in the complete opposite situation than parents who are facing additional weeks or even months of home schooling, so I won't complain... not too much at least.

I could, however, use some encouragement.