My words are:
cabbage ~ diesel ~ market ~ northeast ~ rodent
They were submitted by: Wandering Web Designer - Thank you, Rena!
We're on fall break right now. Actually as this post goes life, it's be our last day - back to work and school on Monday.
Since the current situation did not allow for us to embark on a trip to the Northeast of the USA, or anywhere else in North America for that matter, we were taking one day at a time, looking at the local weather and Colin's training schedule.
Instead of the International Hockey Hall of Fame in Toronto we visited the Lindemann's instead. It is the hotel and lifetime achievement of Swiss hockey legend Guido Lindemann. He joined as a 15yo and ten years later, he and his teammates got promoted to a higher league twice until they celebrated the Swiss Championship win. The following years he became record top scorer, played for the National team, had two sons (one of which will be Colin's coach next season) and renovated a hotel until it looked like this: 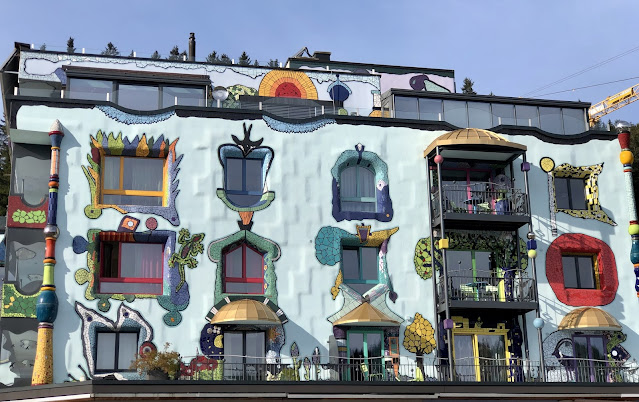 When he found out we were interested in his past he proudly showed us his first skates, his ttrophies, signed jerseys of co-stars and other memorabilia he displays in the popular Overtime Bar. 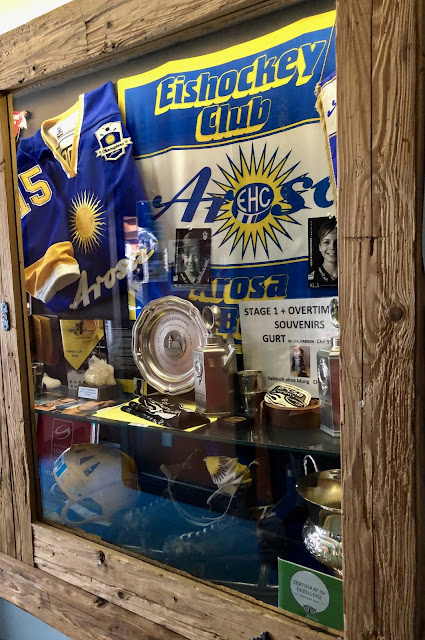 His establishment is located in Arosa, in the Grisons Alps, a good 2.5 hours' drive from home. It's though as if you were traveling to a different world. Mountain vibes are nothing like life in the suburbs where all we ever see are pets and rodents. In the alps though? Mandarin ducks! Isn't it a beauty? 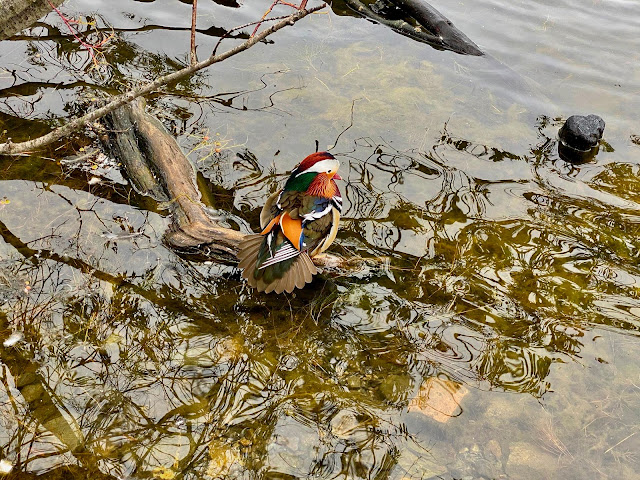 It gets better. We took the aerial cableway to the bear sanctuary they opened in summer 2018. It's a place for former circus and restaurant bears that were kept under undesirable circumstances. Visitors explore the park by walking on suspension bridges that connect the viewing platforms. I usually don't do well with heights, but I wanted to see the bears, so I bit the bullet. And it was so worth it. Meet Napa, the 14yo male from Serbia: 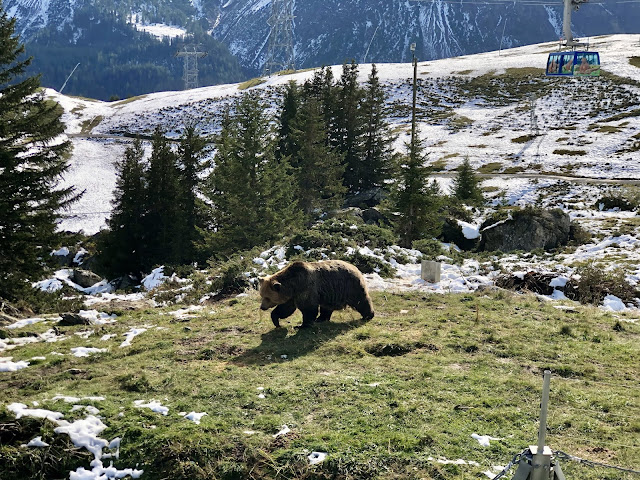 When we arrived, it was overcast and drizzly. Cold, too. It felt like a week from Christmas. (I secretly loved it). 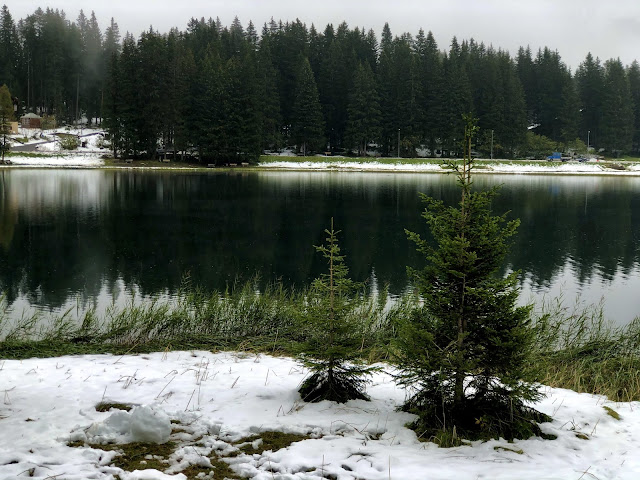 We walked around the small lake and went for a hot chocolate at my favorite hangout, the Güterschuppen, a former freight shed. Look at the fireplace! Perfection. 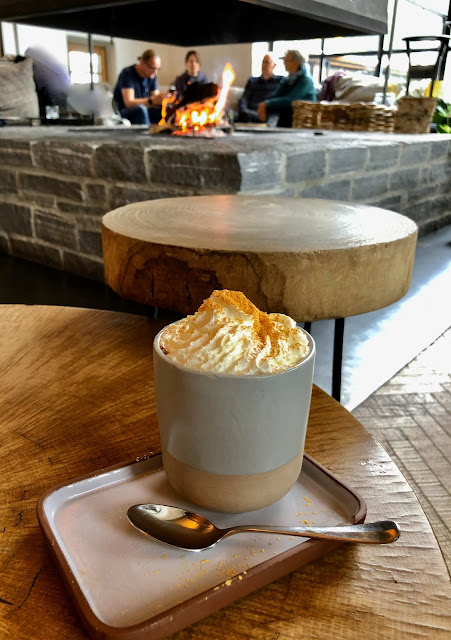 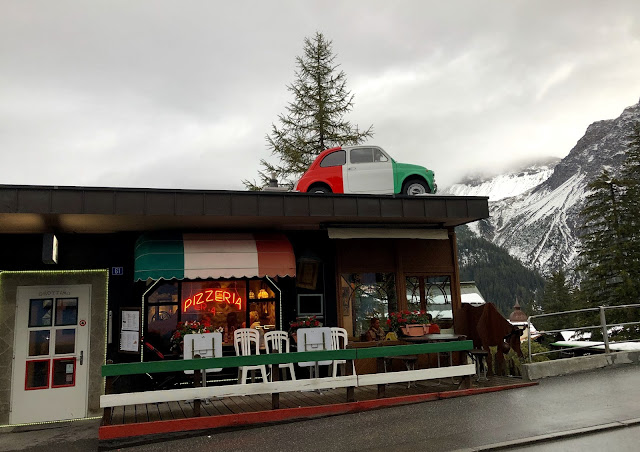 Nah, let's go for the Cheese Fondue. After all we're in the market for the Swiss experience. We passed, however, on Capuns, which is a traditional regional dish, predominantly made of a special dumpling dough with pieces of dried meat and rolled in a chard leaf. That's almost like a cabbage, right? Cause that's the word I need to use. 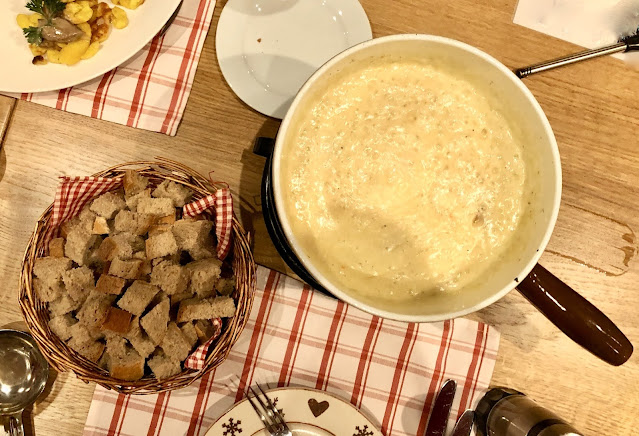 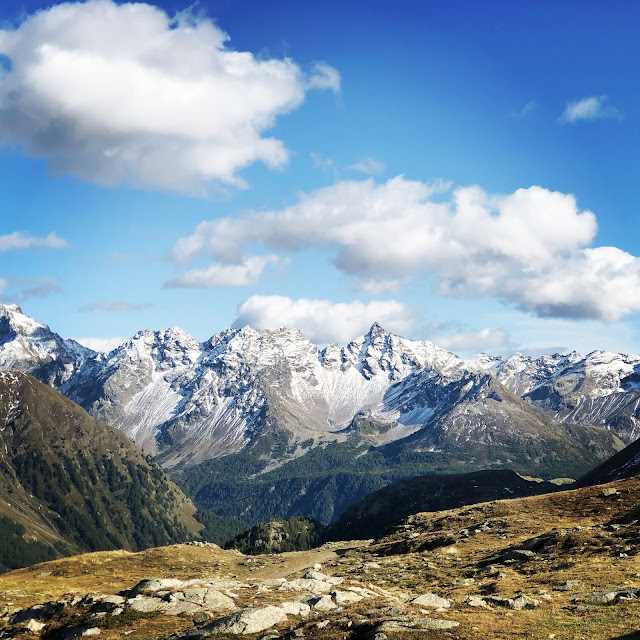 in order to witness two train highlights my husband had been looking forward to, the Landwasser viaduct 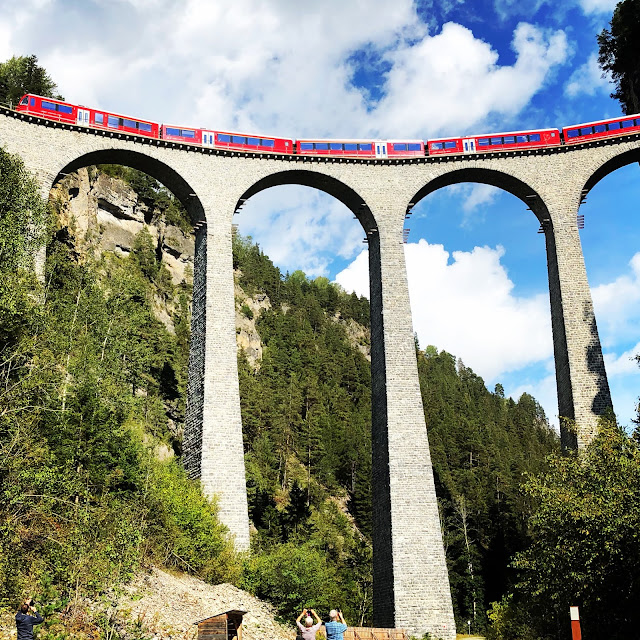 and the spiral viaduct in Brusio. It was built to limit the railway's gradient at the location within its specified maximum of 7%. Quite the spectacle for us tourists! We checked the timetable so we'd actually be able to witness it twice within 15 minutes or so! You can watch the video here. 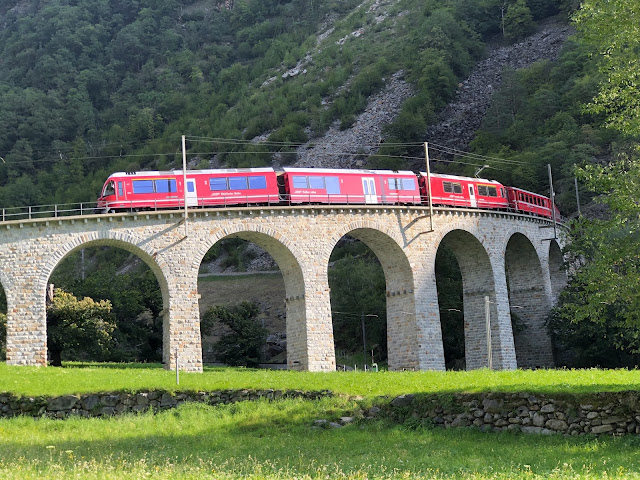 On our way back we checked out another sight, Via Mala, the narrow Hinterrhein gorge. This picture cannot reflect the dimensions. These rocks are gigantic! Watching the video you may discover the tiny humans climbing the stairs. 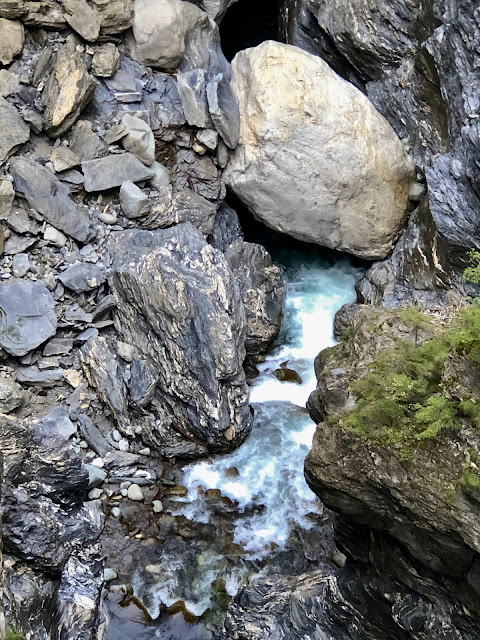 Speaking of gorges, this is the Rhine Gorge in Flims that we visited a few days later. It is located shortly before the Vorderrhein and the Hinterrhein are merging. We like to call it the Swiss Grand Canyon, and even though the scenery is very different from Arizona, it is super scenic as well. It was quite the hike, considering we don't usually hike. We survived, though. Even our teenager did. 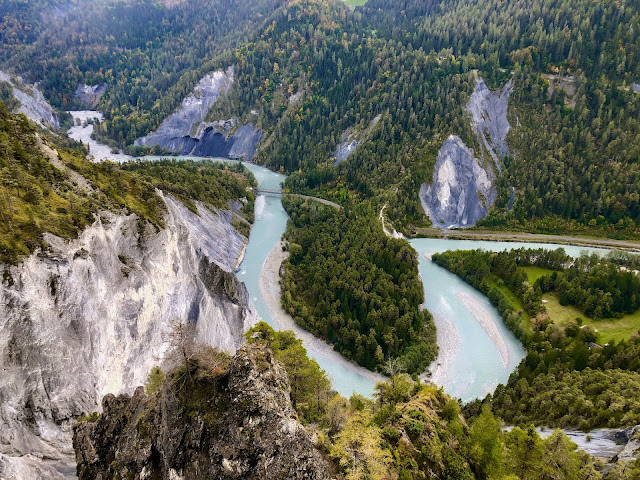 Last but not least we visited the Earth Pyramids of Euseigne in the canton of Valais.
The earth cones are 10 to 15 meters = 32 to 50 feet high and most of them are protected by a rock lodged on the top. The cones were created in the end phase of the last Ice Age, about 80,000 to 10,000 years ago. 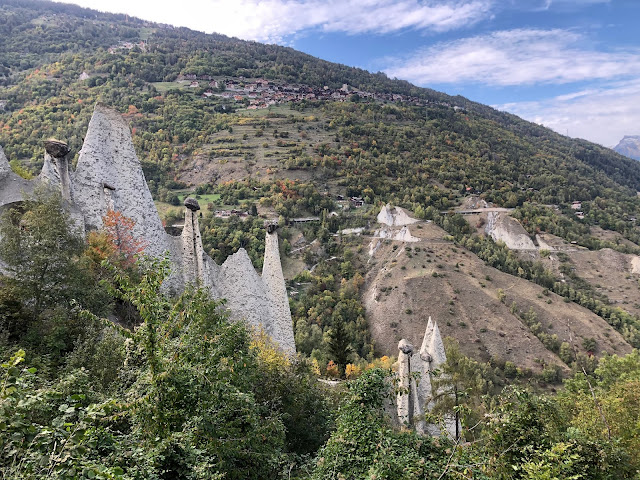 They were on the way to hubby's ultimate goal, the Grand-Dixence gravity dam. Shortly after leaving the freeway, as we began our ascent, the fuel warning appeared. He acknowledged it, saying "still 80km to go, there's no rush." That's 50 more miles. Sion, the city in the valley is at 500 meters elevation (1,640 feet). The dam, however, is at 2,364 meters (7,756 feet), meaning, even an economical car will use some serious gas climbing that gradient.
I don't know if we really used this ginormous amount of gas or if it had to do with where in the tank the sensor is measuring, but either way, the estimate how far our remaining fuel was going to take us, kept decreasing rapidly. Only 20km, now it was at 15km (12.5 miles, resp. 9 miles).
Should we keep going? Should we turn around? Chances are by driving downhill will relax the situation. Our navigation system said we were only 16km away from the nearest gas station. Hubby was determined to get to the damn dam, so he kept driving.
I felt uneasy. What if this "close-by" gas station only carried diesel? Or was out of service altogether? These things happen. This thing happened to my ex-boyfriend and me in the middle of nowhere, aka Death Valley. To this day, the Panamint Springs website promises an on-site filling station when in fact there isn't!
I didn't feel like a TCS (Swiss equivalent of AAA) encounter on a Friday 6pm, with no restaurant / bathroom nearby, and did I mention this part of Switzerland is French-speaking?*
Did I also mention this "close-by" gas station wasn't actually as close as we thought? The distance was as the crow flies - over at the other valley. To which there was no road, no bridge, no nothing. So instead of ten miles it was gonna be fifty miles. That's right. 50!
Of course I was worrying for nothing. After acknowledging the impressive facts about this dam, we were on our way back. 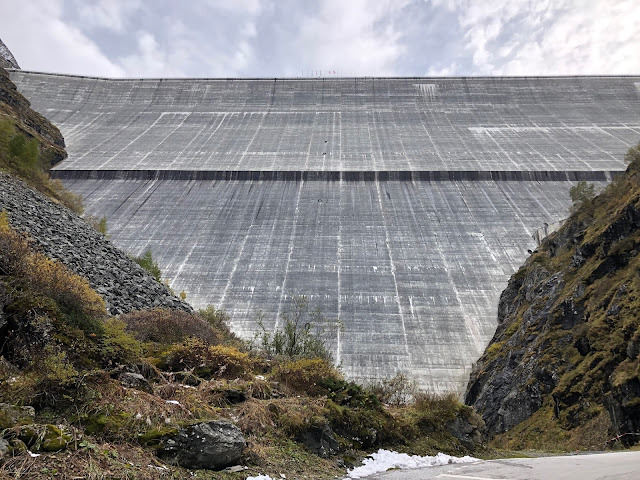 And the longer we drove downhill, the more relaxed our fuel backup looked. We arrived at a gas station in Sion where we had come from, with a comfortable amount of gas left.
* What am I saying by French-speaking? I wrote an entire post about the cultural differences between the German and the French speaking parts of Switzerland. In short, we think they are less reliable and less customer-friendly. (And they think we are humorless and demanding.) Something like this. Either way, I think we would have waited for help for a long time. The sun was setting, and it was getting cold, Remember the altitude 2,364 meters (7,756 feet).
Just another day in the life..
I keep thinking about this immigration officer at some American airport. As a tourist you need to indicate an address where you plan on staying. We usually fill in "so-and-so airport hotel" of the respective city.
This officer looked at us, frowning "you guys flew all the way from Europe to spend your vacation at the Holiday Inn at the airport?"
No, of course not, that's where we are spending our first night.
"I see. And after that?"
We will take it from there. Probably moving towards (insert National Park or other great sight).
"And where will you be staying then?"
We don't know, we haven't booked anything yet. (Geez, it's October, it's not that hard finding a hotel room after Labor Day).
"You don't know? Shouldn't you be prepared? That's awful! You have a kid, too"
Said it and stamped our passports.
"Welcome to the United States."
I'm sure she mumbled "idiots" as we scrambled together our stuff and proceeded to customs.
That's how we roll. We like to keep it flexible. You never know what happens. If we like it where we are, we stay an extra night. If the weather is bad, we move on. We have a notebook, we have a credit card. In all the years of road trips, we probably encountered two or three dicey situations where accommodation was concerned:
Not even then we had to sleep in our car though.
I am not a reckless person, my everyday life is well-ordered, however, while on vacation I don't feel like planning every step. Today's technology and tools are super helpful. Tripadvisor, Booking, you name it. You will find a place to stay (and eat). It won't always be fancy, but that's for another post,
What is your traveling style? How high is your level of prepared-ness? Let me know in the comments below.