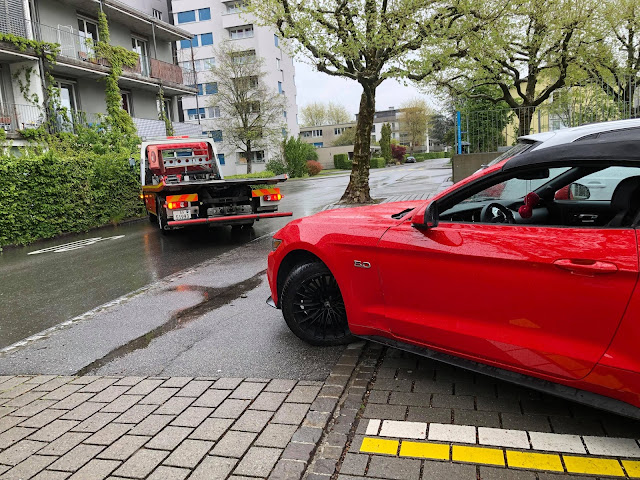 They all have to wait for now, though.

Sh** happened today, and need to write it down.

It was raining pretty badly, and I offered Colin I was going to drive him to school.

Didn't bother to enter the parking lot, just pulled up, halfway on the sidewalk, let him hop out, when a public bus approached.

I quickly pulled into the parking lot, backwards. The bus passed. I wanted to finish parking properly when a car pulled in. Of all the spaces available, it had to be the one right next to me. Why do people do this? Don't they appreciate their space? I know I do!!

So I decided to leave, and I may have not have been very careful or attentive.

Either way. A tree - I swear it was not standing there when we arrived - hit me!!

I was in shock. Should I get out and look at the damage here or at home, in the comfort of our underground parking? Remember it was raining.

Or so I thought.

As I tried to pull out, my car made the ugliest sounds, and I could not turn my wheel.

I grabbed my umbrella (positive point number one) and got out. It didn't even look that bad.

Since I didn't seem to be able to leave, I called road assistance.

My phone was about 75% charged (positive point number two)

The lady was super nice. Usually these dispatchers are like "what's your license plate number, what's your location, what's your membership number". Her, however, could tell I was upset and asked if I was OK.

She said she was going to instruct a third party company to call me within ten minutes.

We hung up, and I was trying to calm down. I didn't even notice at first, but I was shaking, and I wanted to cry. Did I mention I was stuck at the school parking lot? Students were passing by, staring.

I was mindlessly fiddling with my phone, hoping the third party road assistance would call back soon and quickly fix my car to a point that allowed me to drive home, drive back to school to get Colin, drive to work and probably even to practice tomorrow night and take the car to the shop on Saturday.

Yes, that was my naive plan.

An Instagram notification popped up. It was from a social media acquaintance whom I recently met for coffee in real life. I texted her. She has lived in a handful of countries, she must have experienced much worse shit and would understand.

After a few texts back and forth, she called me, and even though I ended up sobbing, it was so nice. She said all the right things, and just the fact that she cared enough to call and talk to me was so comforting.

Later my Philadelphia friend with whom I had been Facebook friends for a good ten years before finally meeting, and I communicated via messenger. One of her teens was supposed to drop the younger sibling for Baseball and accidentally run over their toes.

My own toes and everybody else's in the vicinity were OK. (Positive point number three)

She suggested I called my husband. I was like "what is he gonna do? He's busy at work."

He could be there, sit with you, she said.

"I'd rather sit with you" I replied.

At some point I called road assistance again. It had been almost 40 minutes. A new dispatcher tried to put me through directly to the third party company.

Nope. It was my own fault, nobody is hurt, what are the police gonna do?

"They need to inspect the tree!" 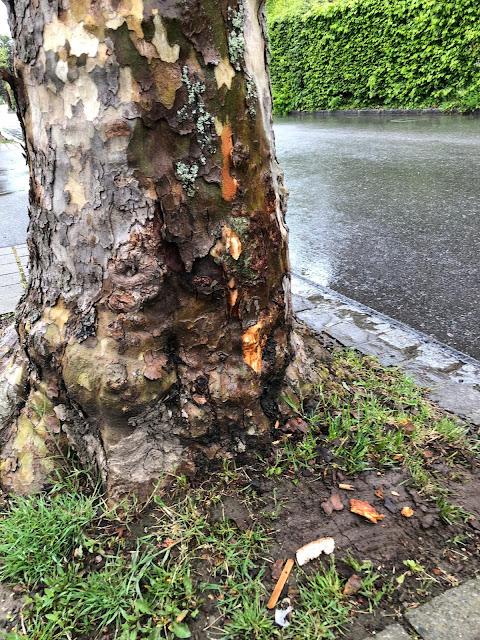 Excuse me? It's just a little bark.

"You must have damaged the tree. You need to tell them. Otherwise you'll commit hit and run. Do it now. I should be with you in 15 - 20 minutes."

It didn't take long and two cops showed up. 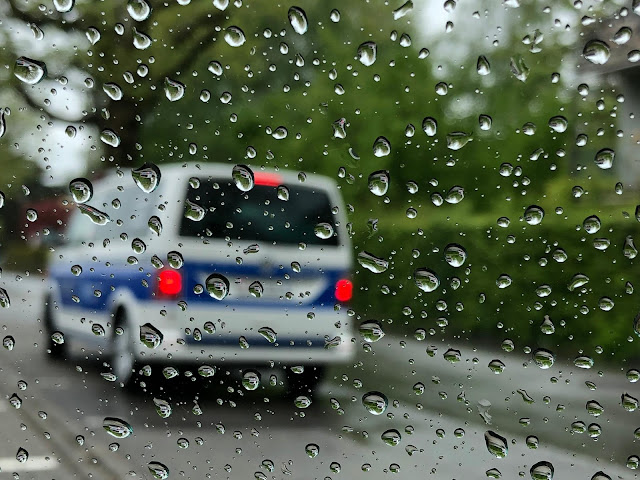 The minute I stepped out of my car, I realized I didn't have my purse with me. Why was this bad? I keep my driver's license and any other picture ID in my wallet in my purse.

Did I mention I was wearing sweat pants? I was really just running out of the house to take Colin to school.

Well, I greeted them and told them that unfortunately I couldn't even prove my identity.

"That's OK", they said. "We can look you up. How are you doing, are you hurt or anything?"

Can I just say, out of the very few encounters I have had with police in my life, this was the nicest. 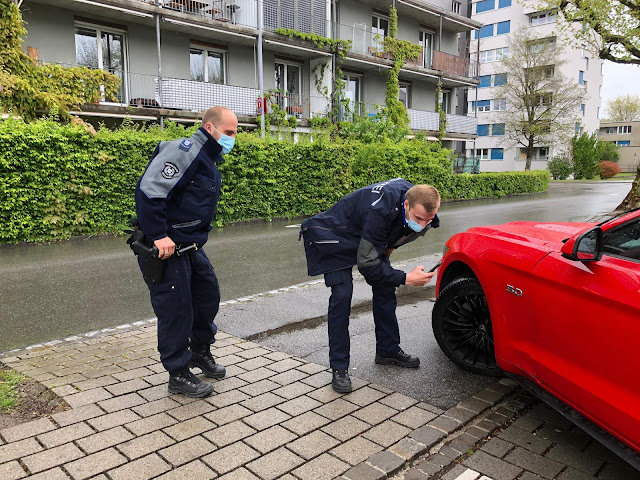 Across the street a house owner must have decided he needed to get some gardening done. In the rain. I don't know, some people are... different.

He started his power saw. One cop grinned underneath his face mask (I could tell) and said "there you go, Ma'am, he's coming over to take care of the poor tree you killed off!"

We had a good laugh, and they left.

They needed to inform the city administration of the incident and would let me know. Let me know what? Did I have to provide a band-aid for the tree? Did I have to make a donation to the mayor's office?

(Speaking of masks... I had a spare face mask in my car... Positive point number four)

My friend was back in the messenger, apologizing. She had had lots of coffee and needed to pee.

Fortunately I had gone to the bathroom before leaving the house (positive point number five - can you imagine? Waiting for road assistance while urgently needing to pee?)

At some point a huge tow truck approached.

Whoa, that must be a bit overkill, no? They just need to fix me up here!

Upon a quick check, the guy didn't think so.

"Your steering system is damaged. There's no quick fix. I need to load that baby up." 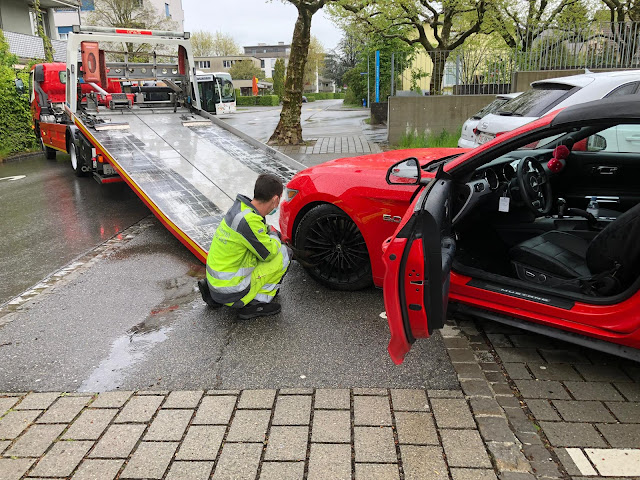 It was no easy task, and fortunately the rain had become lighter. In the distance you can see the public bus lingering. I walked over and told the bus driver we would be a while, why didn't she take an alternate route?
"I can't just drive where I please", she said. "I need to serve every bus stop."
There was nobody waiting at the bus stop. And there were only one or two passenger sitting in her bus, as far as I could tell, and if they needed to get out, they could do so there, but suit yourself.
At some point the tow guy needed to abort his mission and call his boss, and the bus was able to pass. Make that two busses that had accumulated. I hope nobody missed an appointment because of me.
While the tow guy was talking on the phone, he gestured to the building in my back.
An entire school class was glued to the window, watching our every move.
When they realized I took their picture, the cheered and waived. 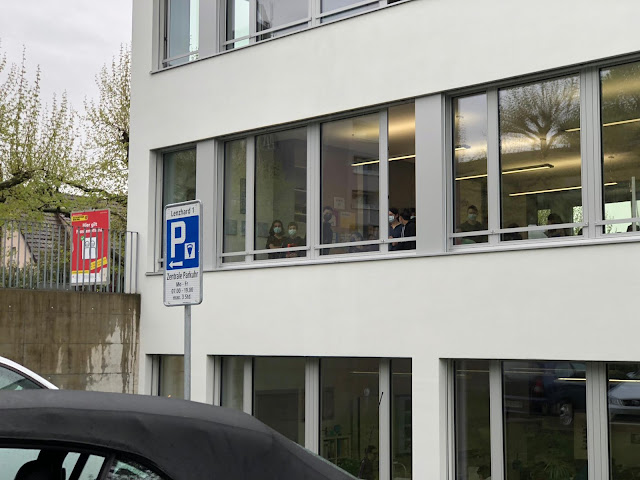 When I told Colin about it, he said "you probably made their day. Anything's better than class."
After his phone call, the tow guy tried a different approach, and it worked. There went my baby!

He was going to take it to a depot, where road assistance was going to pick it up from and take it to my dealership. Oh, and btw, I had the foresight to remove my essentials from the car:
My garage door opener and Colin's hockey stick ;-)
Speaking of babies, time was flying, and five minutes after the tow truck left, school was out.
Colin looked at me, puzzled.
"Mom? What's wrong? Where's your car?" I told him.
He hugged me. "You're OK, though, right? I mean, you're not hurt?"
We could have taken the bus home, but I didn't want to risk an encounter with Ms I have to serve every bus stop, so we walked home. I held the umbrella, he carried his hockey stick.
When we came to the gas station / convenience store I said "too bad I don't have my purse, I would want to purchase a nice snack for you."
My sweet teenage boy was like "are you kidding me, I should buy you a nice snack!" 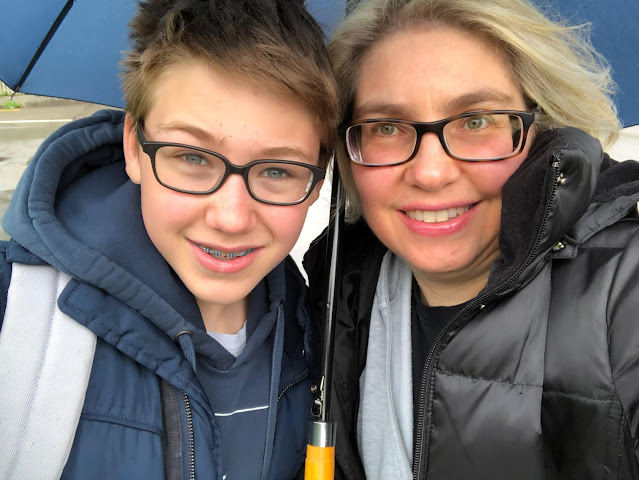 He got me a Coke Zero and a big fat chocolate bar.

I could't eat it till later though. When I finally got out of my wet clothes, (this afternoon ruined my favorite UGGs), the aftermath of the shock set in. I felt physically sick and had to lie down.

Husband had two major questions when he came home: