Use Your Words - Immobile 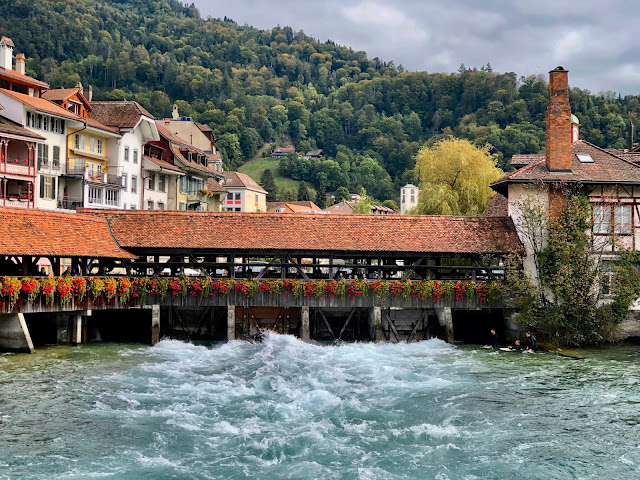 How's everybody doing? Here are some fun facts:

Heavenly bamboo (more commonly known as lucky bamboo) is actually not a bamboo plant, but a resilient member of the lily family.

Lichens are formed by a relationship of two organisms, an alga and fungus. The color of lichen is determined by the alga it contains.

Before being named "Goop", the magazine was originally called "Insufferable Quarterly".

Portal 2 (which is a puzzle-platform video game, in case you're living under a rock like myself) originally didn't have any portals in it.

A bird's plumage (feathers) usually weigh(s) more than its skeleton.

What do these words have to do with what I am going to be talking about in this post?

Absolutely nothing. The crucial inspiration did not hit me this time.

Remember the encounter between my car and a tree back in May? It had damaged my car's steering system. The dealership people found out there wasn't any available all throughout Switzerland and Europe for that matter, but they were able to order one from a shop in Germany that was not part of their network, (I still don't quite get what that means, a Ford spare part is a Ford spare part, no?), which seemed to cause even more administrative hassle than importing goods from a EU country into an non-EU country.

My suggestion to order one in Detroit was discarded as "takes too long" and met with eye rolling. Don't knock it till you listen to me, dude. I have a friend who spends her summer break in Michigan. She offered to help. How large can a steering system be?

While waiting for my precious steering system, I didn't have a loaner because my unsurance (no typo, that's how I feel about them) does not include one since it was my own fault. During all that time, I either depended on my husband's mercy or went places on foot or using public transportation.

At some point I called and asked if they could anticipate the scheduled maintenance that was going to be due in July, since the car was just sitting there anyway.

"Nah, that doesn't make sense. It's too early. Your part should be here any moment anyway, that way we will combine both jobs."

It took eight weeks (June 22nd) for it to arrive, and upon installing it, it turned out, it was slightly off. That's probably what he meant by not part of the network.

"We need to order an original one."

Where will you get an original one if you tell me there isn't any available in Europe?

"Original as in from the U.S."

Oh I see, didn't I suggest that in the first place? You told me it'd take forever because of Covid, blablabla.It could be here by now?!

"It should be here within three weeks."

What in the world makes you think ordering from the U.S. should be quicker, and if so - again - why didn't we do this in the first place?

"Oh, and I noticed your scheduled maintenance is coming up, did you want to make an appointment?"

I thought I was going to slap the guy. Isn't this what I suggested last month???

So is the car driveable, or did I just take a bus and two trains to get here for nothing?

"You may drive. It's just that the Electronic Stability Control ESC doesn't work. You need this on the race track or on snowy/icy underground. It prevents your tail from swinging out. After all it's summertime, though, so no worries."

Oh, I see. That happened once last winter. It was scary.

You know what was scary, too?

On that very day? Late afternoon / early evening? We had one of several downpours this "summer". And when I say it, I mean it. Check for yourself:

So I drove home, nice and slowly, holding onto my steering wheel, never changing lanes or anything, wishing I had ESC.

This error message was only one in six that from now on appeared every time I started the engine. 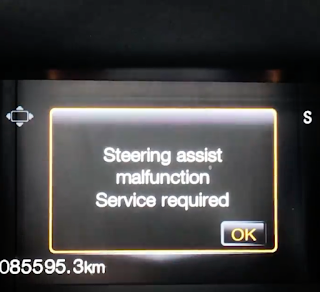 I experienced the warning sounds and messages for a total of 15 weeks.

Of course my milage was going way beyond the maintenance schedule, and I told the guy it was not my responsibility if there was any warranty trouble resulting from this.

So last weekend I finally picked up my car, new steering assembled and maintenance done. The shop is a 45 minutes' drive away. I left my car in our garage on Saturday afternoon. On Monday morning, when Colin and I wanted to leave, I couldn't start the engine. The battery was dead.

I had not left any lights on or anything?

I was too pissed to call the shop, also we needed to leave. Fortunately, hubby's reliable station wagon is just a ten minutes' walk away, and we were on our way.

Today, my lovely coworker came to the house. He brought a charger. I had no idea there was such thing!! Kind of like a phone charger, just larger! 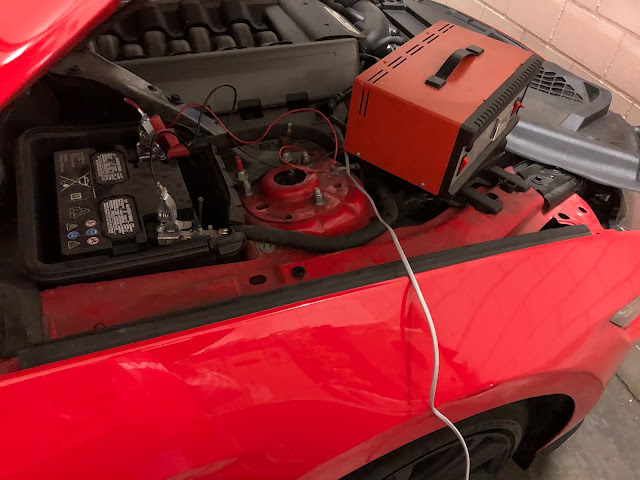 More importantly he has skills and knows how to do these things.

Interestingly my battery seemed to charge at first, and then lose power again? 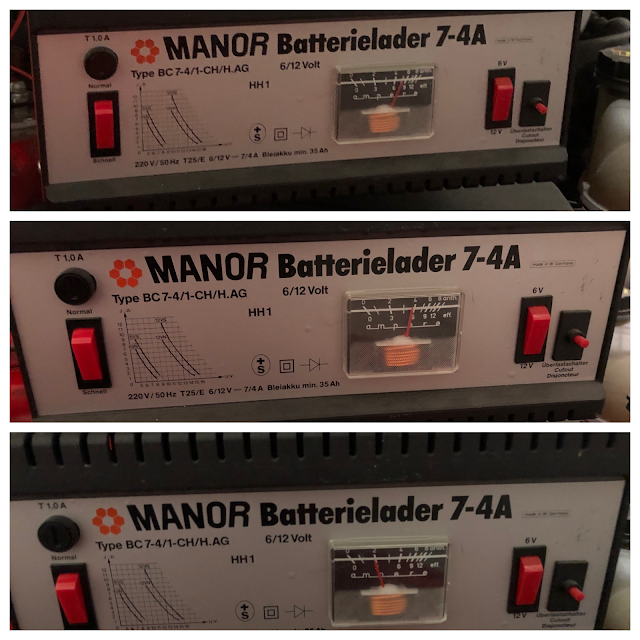 On a positive note, however, I was able to start the engine and drive Colin to hockey practice.

Two days later, however, there was the next issue. All of a sudden my car was asking for a SD card necessary to operate the navigation system. Huh? Why? And where would that card be? Good thing I know how to find my way home - even in the dark, which it was.

What else happened that week?

Hubby's car, which I had used for a day trip to Northwestern Switzerland, was running low on gas. With low I mean, there was a 10km range left. 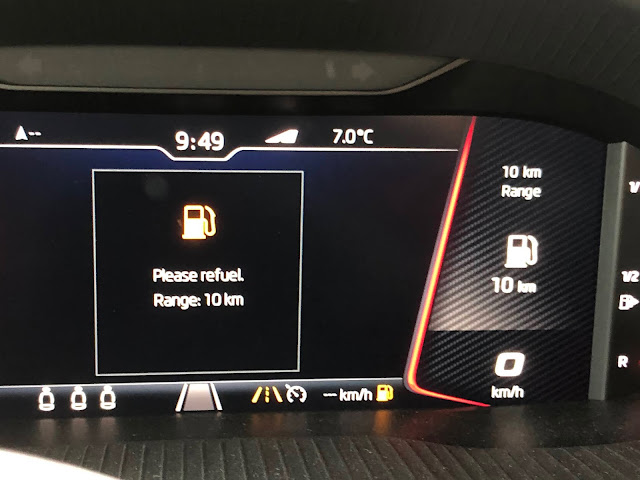 The gas station our company has a contract with, had some trouble. I wasn't sure if there was no gas or no technology to pump the gas. Either way, it looked as if I had come to the wrong place at the wrong time. 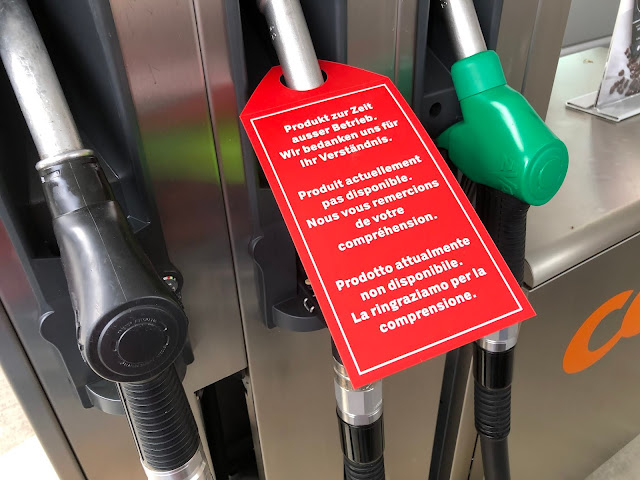 Good thing we live in an area that has more than one gas company within a 10km range, so I was able to fill hubby's car elsewhere.

Before wrapping up, let me tell you about the dishwasher.

Yes, the dishwasher that required a new pump on my birthday. So exactly six month ago.

Upon coming home, I noticed there were error codes blinking. F1 and E21.

F1 has to do with the water being heated too much and some Negative Temperature Coefficient NTC resulting from that?

E21 can't be googled for this brand. Another brand, however, states that E21 stands for a defect regarding the circulation pump.

Please not the pump?! The last one cost CHF 650, about the same amount in USD.

I'm proud to tell you that I fixed the dishwasher myself.

By restarting the darn thing. Worked like a charm.

Now if only I knew how to fix the helmet... 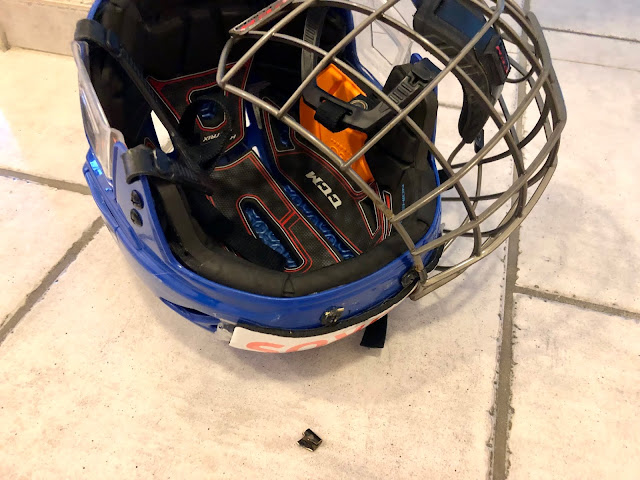 Colin's hockey helmet. One of the thingies that hold the cage in place, broke off. I don't even want to know how this happened. Did he get a puck to his head?

So in case you're wondering how I am spending my fall break, this is how.

Oh, and I also made the office Christmas cards. From scratch, until the point they can be printed in hundreds by a professional print shop.

If for a day or two there's no trouble shooting for me to be done, AND the weather looks promising, we'll head out for a short trip, of which I included two picture in the beginning and at the end. Hopefully more to follow. 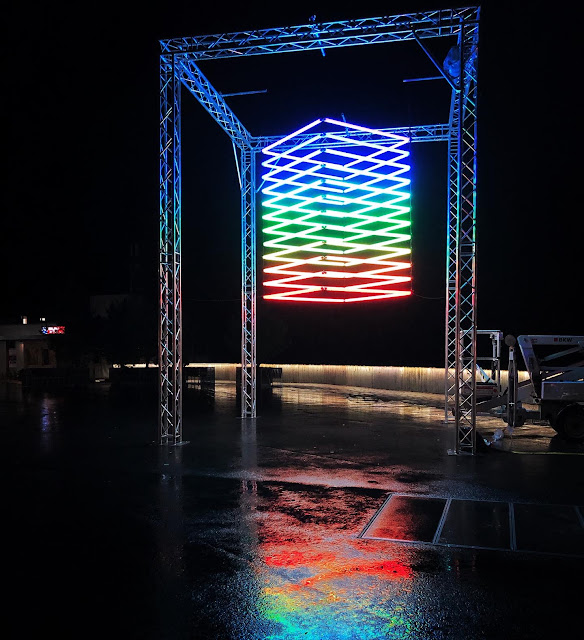 So what have you been up to? Let me know below, and please don't leave before checking out my blogger friends' posts: