Use Your Words - Just another Day at the Office

braze ~ stupid ~ artful ~ generous ~ rascal
They were submitted by: On the Border - Thank you, Diane!
Spring is upon us, and it has been almost six months without any car incident. Sadly you may already know where I'm going with this.
Early spring is also a popluar time for construction and maintenance projects on the roads. One happens to be "my" freeway, the main artery across the entire country.
In each direction of travel, there are typically two lanes, and in certain places even three. I mention this because this may elicit a surprised smile from you. Again, we're in tiny little Switzerland with a population density of 212.5 people per square km (compared to the U.S. with only 34 people per km2 or 93 people per square mile), so we don't have much space to build more streets.
So if roadworks are taking place on one lane, cars have to switch to the remaining lane(s), causing fierce jostling, and this cutting in line generates aggression in many drivers. If you're used to drive, say at the West coast, you couldn't believe what happens on Switzerland's roads. Many selfish, impatient and rude drivers.
Long story short, some stupid rascal driver caused all of us to brake abruptly. And I mean what I say. The kind of full breaking that leaves you with an adrenaline overdose. My car came to a halt a mere inch away from the car in front of me.
Phew, that was close!
The second I thought I was lucky, I became unlucky. The car behind me (the Mercedes van) did not pay attention and crashed into mine. He later claimed the car behind him (=the Nissan) shoved him into me. I have no way of saying, and I don't really care. 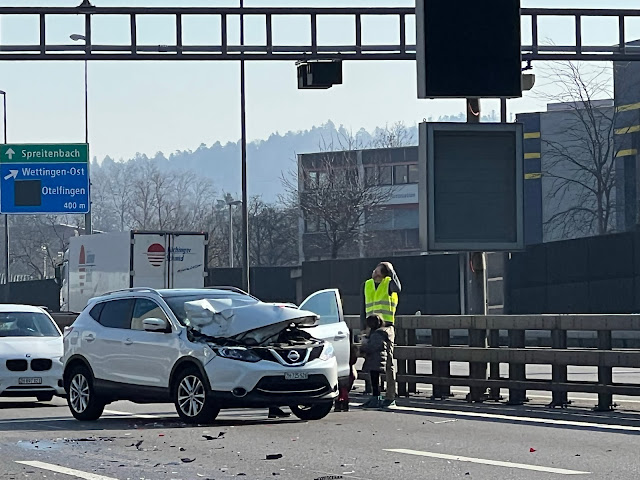 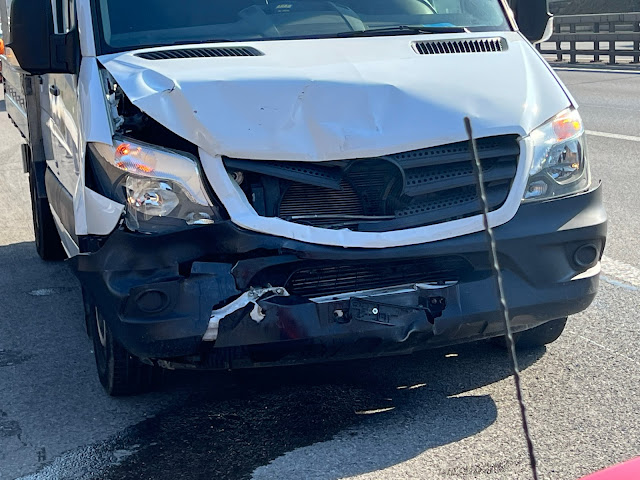 I pulled over to the emergency lane, got out with weak knees and hesitantly moved all my limbs and my head to make sure everything was in its place. The car in front of me pulled over as well. A lady emerged and asked if I was OK, and what about my car? I said as far as I knew everything was OK at the front and she said in that case she'd leave. I had no idea if I had to keep her there but I felt I couldn't force her to get involved, so she drove off.
The guy behind me didn't speak German very well, and it was loud on the freeway. He kept talking, among other things he told me I should not have let the lady go.
All I wanted to do was to sit down and breathe.
I was shaking, but I think on the outside I seemed extremely calm. I pulled out my phone and called the police. Then I texted hubby "stuck on the freeway, may not make it back in time, please go home and feed Colin at noon."
No need to get him worried, right? 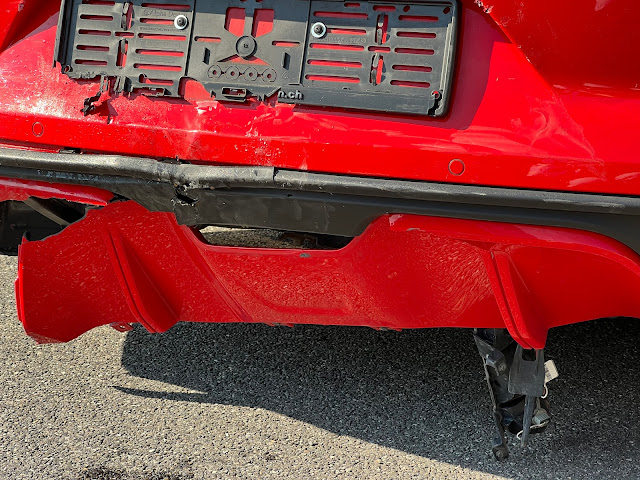 Two cops arrived in their "civil cars". That's a thing in Switzerland. They're called "the mobile unit", and they usually cruise around in their dark blue or black BMW station wagon or similar.
I am always alerted when I see any kind of similar car - although 99/100 times it's just an innocent fellow citizen.
The 1% though - they are on the lookout for drivers who don't wear their seatbelts, who are talking on the phone or worse texting, who are speeding or otherwise driving recklessly. Usually none of this applies to me, but you never know what they can nail you with, maybe you don't keep enough distance from the car in front of you, or you didn't blink upon changing lanes.
Anyway that day I was grateful to see them, and they were very professional and polite. As one of them was interviewing me about the course of events this happened: 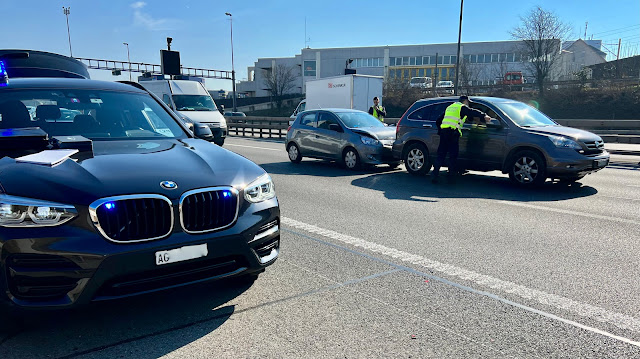 I literally just said to the officer "it all happened so fast" when a gawker bumped into the car in front of him. I couldn't help but grin. The policeman was like "lady, don't go anywhere, I gotta welcome my new customer" and darted over there.
For him it was probably just another day at the office.
When he came back he finished taking notes, and he told me what I wanted to hear: I am not accused, and it was OK to let the lady leave. I did not touch the car in front of me. There are no traces, and they obviously consulted video surveillance. I would love to review that footage myself. It was probably a matter of half an inch that decided over a lot of money for repairs, deductibles and fines as well as repercussions like driver's licence suspension and criminal record.

Let's not even get into the possibility of bodily harm. Friends told me to watch out for signs of whiplash. By the time this post goes live, it'll be over a week ago, so if I don't come back to edit, I should be OK.
So what were the next steps?
The cops called for two tow trucks. Well, they did so before there were two more vehicles involved, but as it turned out these trucks are easily able to load / tow more than one car at a time. 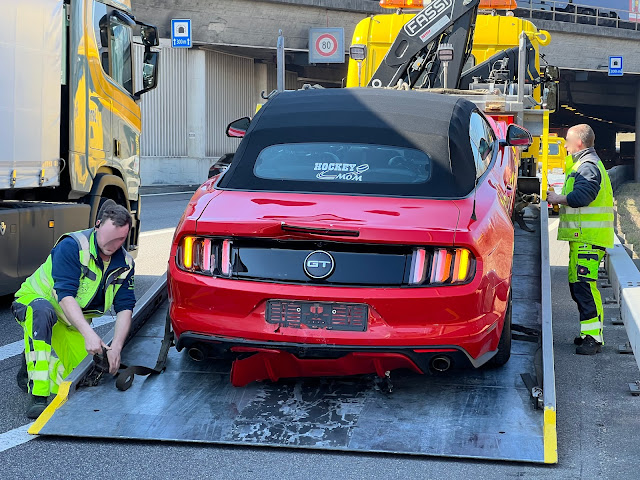 The plan was to take all the vehicles to the tow company and to invite the different claims adjusters so that they can get an overview.
By the time I was sitting on the passenger seat of the tow truck I noticed it was already 11:45am, and my husband had not read my message. I called. No answer. I called my coworker, told her everything and asked her to walk into hubby's office and get him to hang up on whatever client he was talking to.
Sure enough he called back immediately, and after giving him the downplayed version of what happened, he went home to make sure he was there when Colin arrived from school.
The tow company gave me a loaner, and my coworkers have been teasing me about it ever since. It's a tiny thing, almost a toy car. It has four wheels, and it drives, and that's about it. Its notable special feature is the previous drivers were smoking in there, and it smells accordingly. Yuck.

The following days I've been talking to different insurance people, and every time I felt they were perfectly trained to talk to clients. So much so that I never knew if they were really looking out for my best interest or if they had a hidden agenda and artfully manipulated me into going along?
They were being sort of vague about my choices. Will they pay for repairs? How long were these going to take this time? Was the damage beyond repair? To me as a layperson it sure looked like it was going to take a little more than just some brazing.
What they both agreed upon was the maximum of days I was entitled to drive the smell mobile: ten. After that I am back to square one from half a year ago: use public transportation, walk or be at the mercy of my husband's good nature.
Interestingly the expert of the guy who hit me told me my car's current time value was higher than my own insurance guy's estimation was. There had to be a reason for this apparent generosity?
A friend, who is a financial consultant, told me this was their daily bread, they handle cases like this every day with counter-parties, and they want to continue to work well together, so they don't haggle over a few dollars. Well, Okay then.
Thank you for bearing with me. I apologize for the long ramble. It was sort of cathartic to write it all down.
Part two may follow soon.

Please don't leave before checking out my blogger friends' posts: