Y is for Yellowstone

Welcome back, to the letter Y of this year's A-Z challenge!

Yesterday I had you do a little travel quiz because I have never been to Xo‘jayli, today we're visiting another very cool American national park, Yellowstone.

We were there mid-May, over ten years ago, and we went there unprepared. So much so that we only realized how negligent we were as the ranger at the park entrance gave us the leaflet and said "the road to Old Faithful just opened last week."

Most streets were snow-covered until that time of year, and parts of Yellowstone Lake, the park's largest body of water and the largest freshwater lake above 7,000 feet in North America, were still frozen. 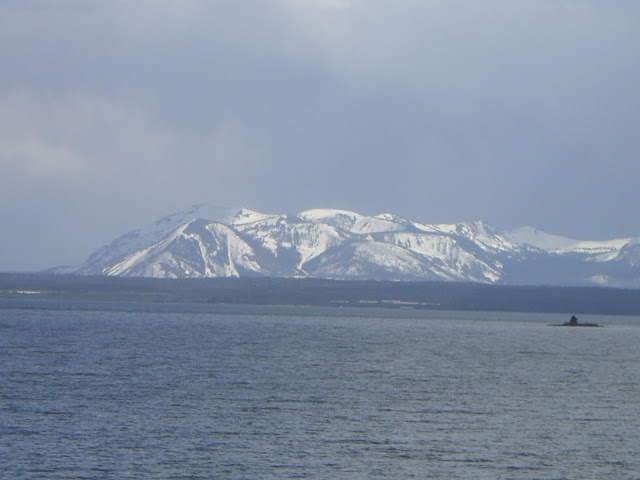 During the winter, many animals like bison and grizzly bears trek to the more shallow areas of the lake's southern shores, where the water doesn't freeze due to the geothermic activity that takes place beneath the surface. 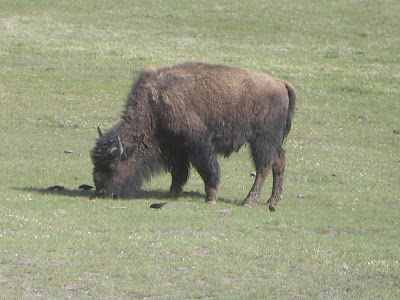 Yellowstone is probably the largest national park we've been to, and as it was still considered pre-season, accomodation wasn't available inside the park yet, so we needed to get out before they closed for the night.

We used different exits every night, which gave us the opportunity to add Wyoming, Montana and Idaho to my list of "States visited":

One night we stayed in Cody, home of Buffalo Bill.

Back to Yellowstone, though. What's there to do and see?

Basically there are geysers, hot springs, and it smells of sulphur.

In most places on the planet, the crust is about 20 miles thick and floats on a mantle that consists of molten rock, or magma. Geologists discovered that the earth's crust is extraordinarily thin in the Yellowstone region, only about two miles.

The seething hot mantle heats the ground above it, which in turn heats the water in the springs and geysers. 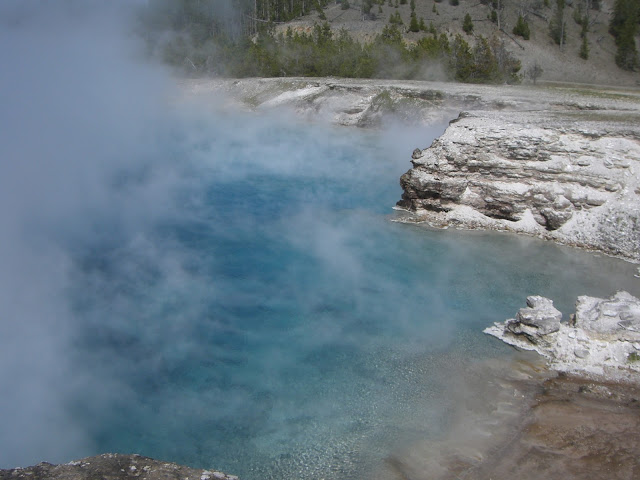 Mammoth Hot Springs is one of the park's more unique attractions. Known for its terraces – formed over centuries of hot water bubbling up from the ground, cooling and depositing calcium carbonate – Mammoth Hot Springs' travertine formations are often described as natural sculpture. 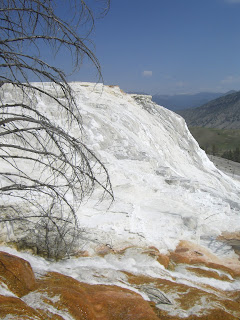 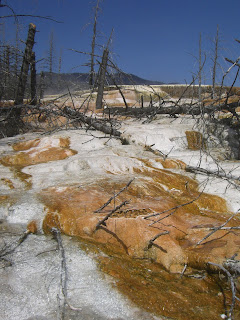 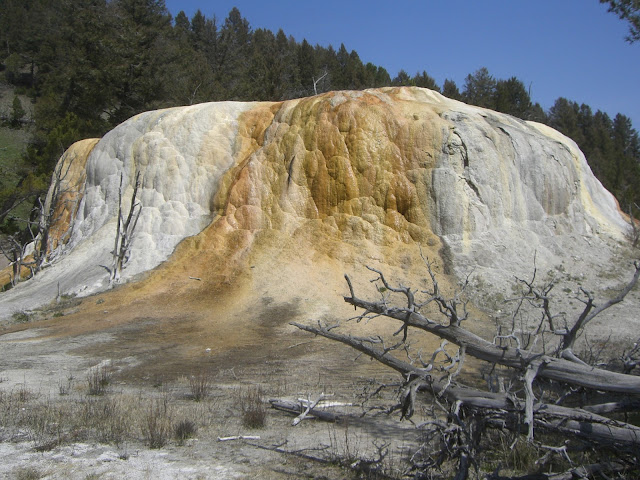 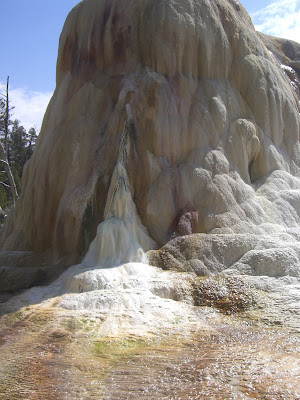 I found this article on volcanic springs, it contains breathtaking pictures, check it out! 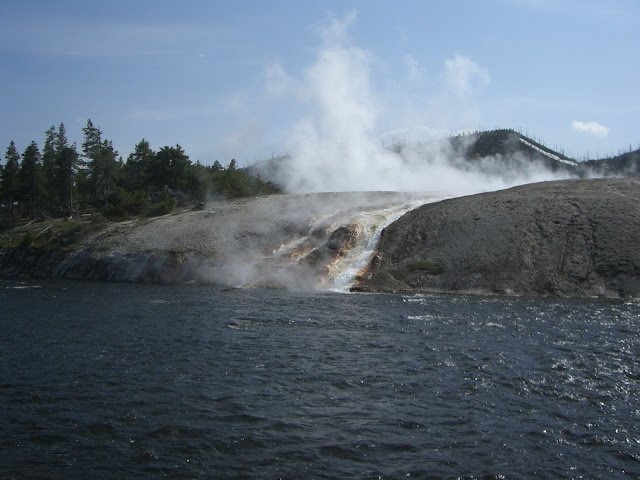 Old Faithful, the world's most renowned geyser is a must-see for every Yellowstone visitor. Although it isn't the largest geyser in the world, Old Faithful's eruptions are definitely awe-inspiring, averaging around 130 feet high. Like its name suggests, you can count on Old Faithful erupting approximately every hour and a half 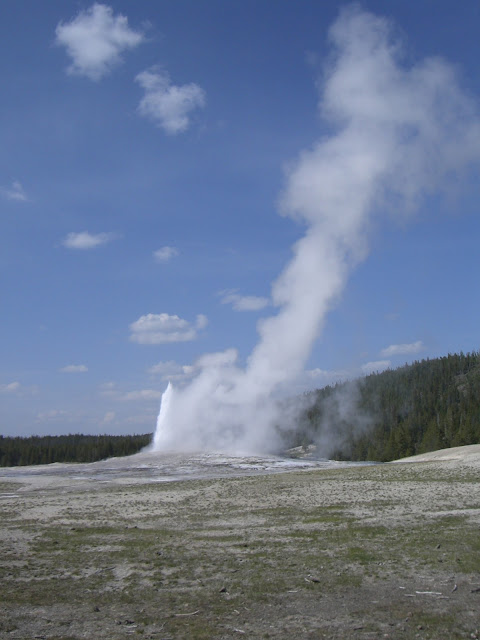 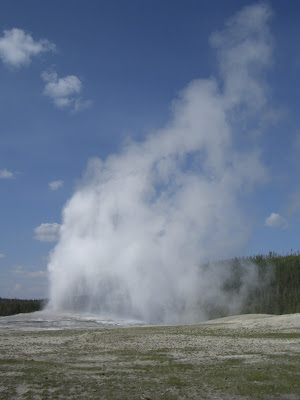 The Midway Geyser Basin's Grand Prismatic Spring is the largest hot spring in the United States, approximately 370 feet in size and around 121 feet deep. But its rainbow waters are what really make it fascinating: While the center of the pool's cerulean hue is pretty characteristic, the deep reds, bright yellows and fiery oranges encircling the edges are not. These colors are caused by pigmented thermophilic bacteria that thrive on the rich minerals produced by the geothermic activity. The color of the bacteria is determined by the temperature of the water – the center is too hot to support life – which is then reflected when light hits the organisms. 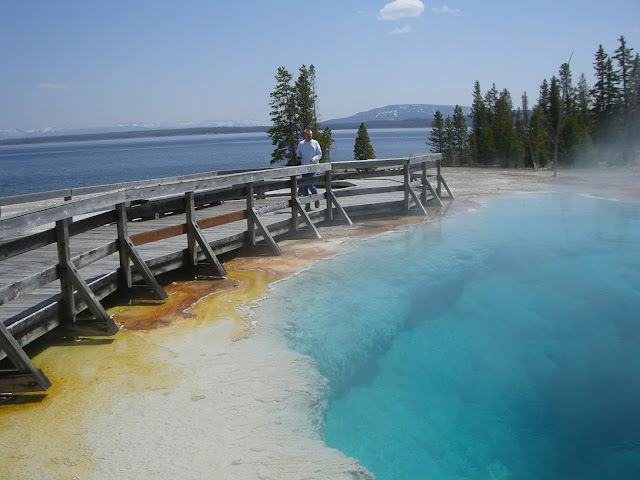 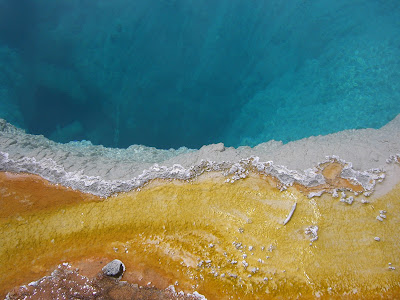 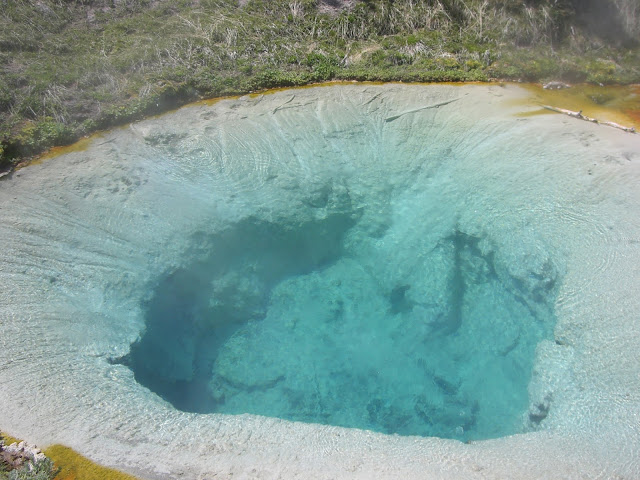 We took a ton of pictures, and they are all great - and a bit surreal - but they all look more or less alike, and I don't remember what the specific sights are called, so I'll spare you.

Use your time to visit some other Y posts and then enjoy your weekend! I'd love to see you back on Monday for the last letter of this alphabet. Z is not for Zurich because I did that in 2016 already, so Z is for Zug, the city my son plays hockey at. Stay tuned!