Z is for Zug

We left off at Yellowstone national park last week, and today we're taking care of the

last letter of this alphabet, and in oder to do so, we're going home. My home, that is, in Switzerland.

Z is not for Zurich because I did that in 2016 already, but Z is for Zug, the city my son plays hockey at. It's also the city I lived and worked at between the years 1997 and 2004, which was only interrupted by my moving to California and back. 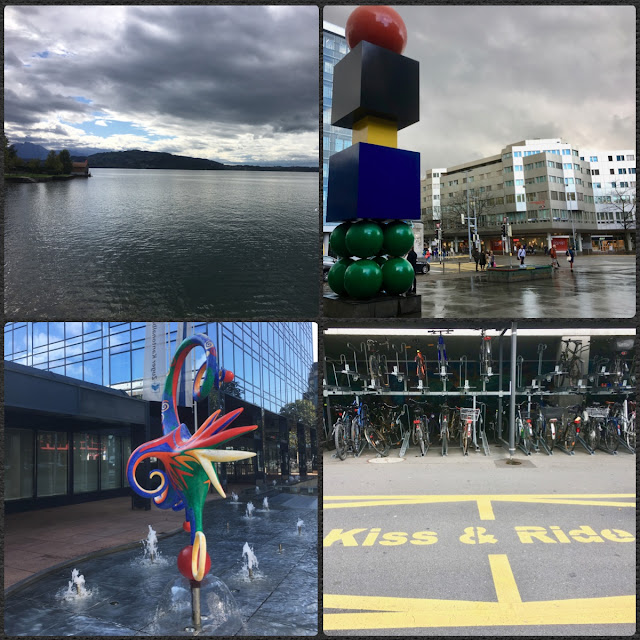 Let me kick off this post by telling you about a unique custom that goes back to the 18th century when they used to celebrate the official beginning of the cherry picking season.

At 12 noon of Cherry Storm Day the church that possesses the largest (and therefore loudest?) bell will ring for a full 15 minutes. In the olden days this was the official invitation for the citizens who then promptly, equipped with ladders and baskets, rushed stormed to the public cherry tree area that had previously been heavily guarded.

The new tradition that was introduced a couple of years ago, integrates the primary custom into a fun race: people carrying ladders that measure 8 meters = 28 feet, are running a course all through the old town. Kids get half-lengths. Ladders, that is. Same course.

After announcing and honoring the winners, there is a street festival taking place at Landsgemeindeplatz in the old town, offering of course all kinds of cherry specialties.

What's "Landsgemeinde"? Back in the (not so) olden days, direct democracy was being executed at this very spot. Issues were being discussed and voted on in person. Those who agree, raise their hand! Those who object, raise their hand. Any abstention?

Up until 1971 in some Swiss cantons (states) this right to vote only applied to men. No kidding. A handful of die-hard conservative cantons kept thinking those matters exclusively belong in male hands.

Anyway. This piazza is named after the meeting spot for public voting.

For Cherry Storm Day it is the venue for a cherry themed folk festival. At the Cherry Market you may purchase all kinds of specialties:

Kirsch liquor, very famous. It's being used to make Zuger Kirschtorte. A cake made from a light Japonais and biscuit batter, soaked with Kirsch. I don't like it - I prefer cake and alcohol to come on a plate and in a glass. Separately. But maybe that's just me.

One of the treats is called Cherry Storm like the event. They are made of almond paste and sour cherries. 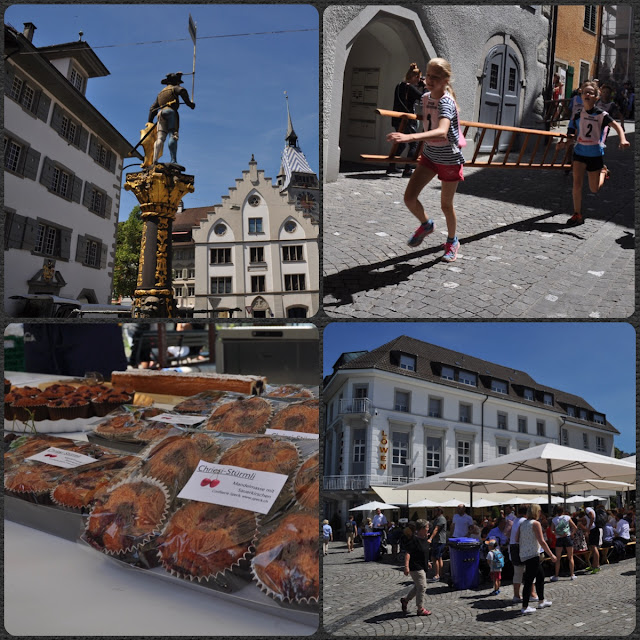 Another very popular custom is the "Stieremärt", the annual cattle market, that is taking place in September (and therefore typically messing up the parking situation at the beginning of the hockey season.)

Farmers from all over Switzerland auction their calves and bulls. Non farmers meet for a beer and a chat, kids enjoy the fairground.

In 2017 the Stieremärt was upgraded to honor the local ice hockey team's 50th birthday. Their mascot happens to be a bull because the arena is right across from where the stables used to be.

The hockey franchise (generously supported by many sponsors) sold 50 blank fibreglass bulls to companies, institutions, schools and private individuals, who then decorated their bull and displayed it in a public place all over town for a couple of weeks.

For the actual bulls market all the artists brought their bull to the hockey arena for a competition. Visitors voted on the most attractive bulls. The bulls were auctioned, and proceeds went into promotion of young sports, so I like to think that those fantastic event contributed to pay for my son's hockey coaches! 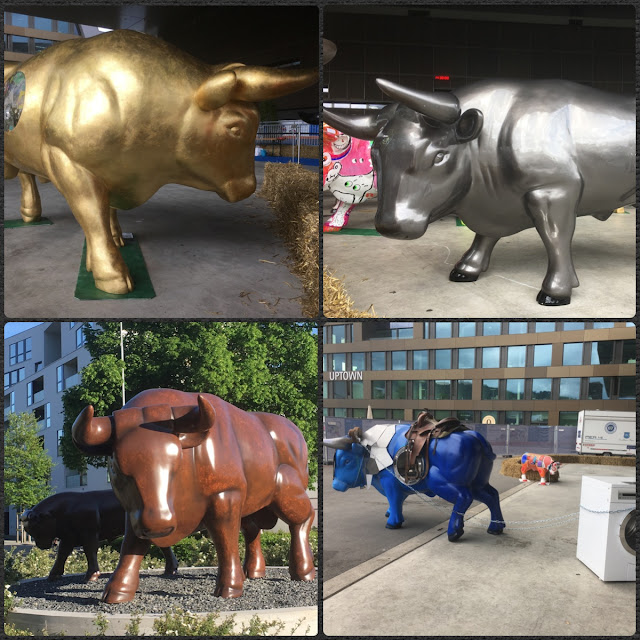 What's with the blue bull and the washing machine? It so happens that a renowned home appliances company is situated in Zug, and they decorated the laundry bull.

It was later converted into a goal wall shooting for intermission: Instead of trying to aim your puck into a hole in a wall, you try to score into the washer. Very cool. The idea is not new, though. As we learned Mr Sidney Crosby did this when he was a boy!

Speaking of hockey, the reason Colin plays for the Zug hockey franchise is that from my days of working in Zug I have been friends with the youth talent promoter.

We attended skateathons long before Colin was born, and once he was two years old we took him. He stood and watched in awe. Andy, my friend, told him "look, when you're five years old, you may join our hockey school. You tell your Mom you wanna come, it's every Wednesday afternoon in fall and winter. Will you do that?"

The rest is history. Seven years later #33 racing with the coach:

Now Zug is almost an hour's drive from where we live, which requires a great deal of organisation, goodwill at work and school to leave early, and flexibility to eat, drink, grocery shop, blog and do homework on the go: 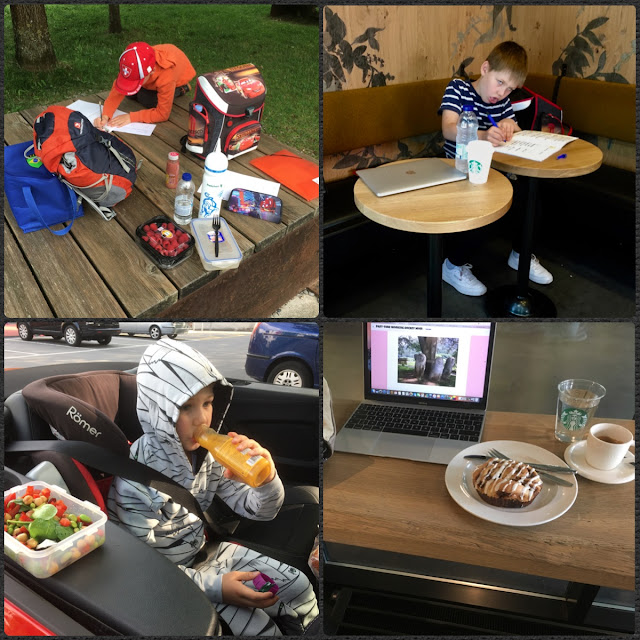 My life as a part-time working Hockey Mom (read more about the joys and pains) also involves doing tons of laundry, getting up early to get to unheated ice arenas at Godforsaken locations at stupid o'clock on Sunday mornings, so it's only fair that there are some glamorous aspects like the Skylounge, a panoramic bar on our arena's premises that we like to frequent on special occasions.

In one of the shopping arenas there's a walk of fame, of which one star was dedicated to our hockey team in 1998, the year they won the Swiss championship. 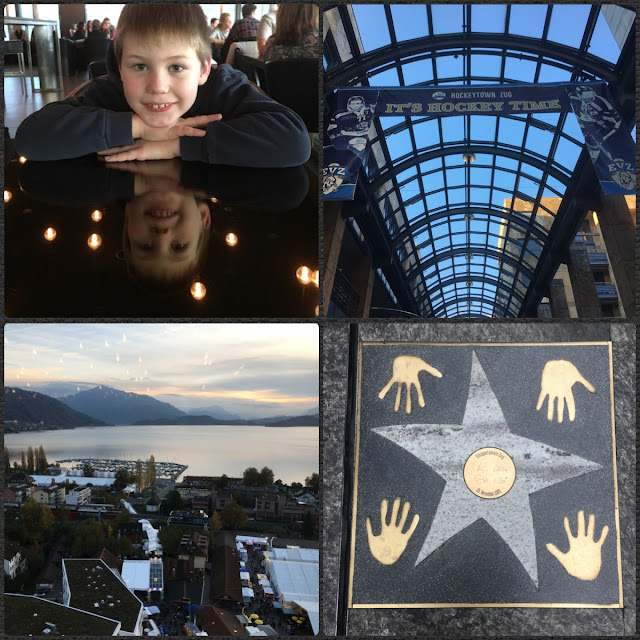 For people who aren't into hockey there is plenty to see and do in Zug. There is a waterspout fountain, not as impressive as the iconic one in Geneva, but still pretty!

You may take stroll along Lake Zug, rent a pedalo or explore the old town by foot as everything is pretty close together. 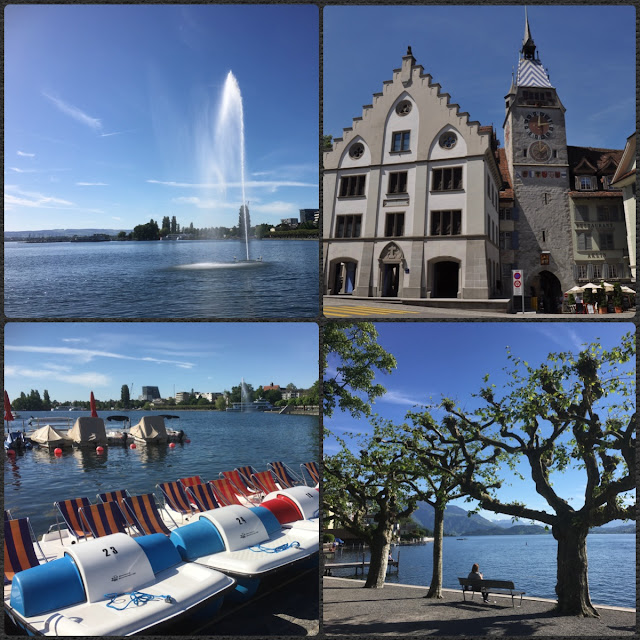 Zug is famous for its fabulous sunsets, and rightly so!

Even though it is a busy city and home to many international companies' headquarters (thanks to low taxes for enterprises), fortunately traffic is moderate, and not every square mile has been sold to build more office space, so there are quite a few lovely parks and recreational areas. Within 30 - 60 minutes you may even get to ski resorts. 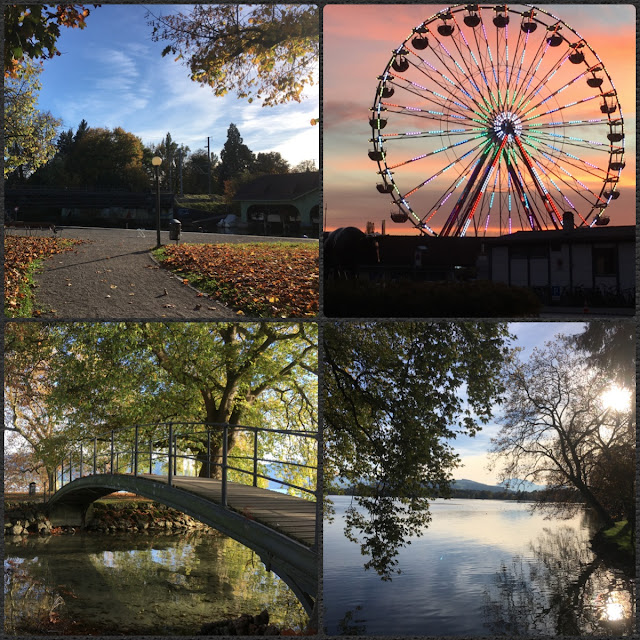 For the Christmas season Zug is doing a wonderful job decorating and making the city magical. Next to the outdoor ice rink they not only set up a Christmas tree but a Fondue Chalet. 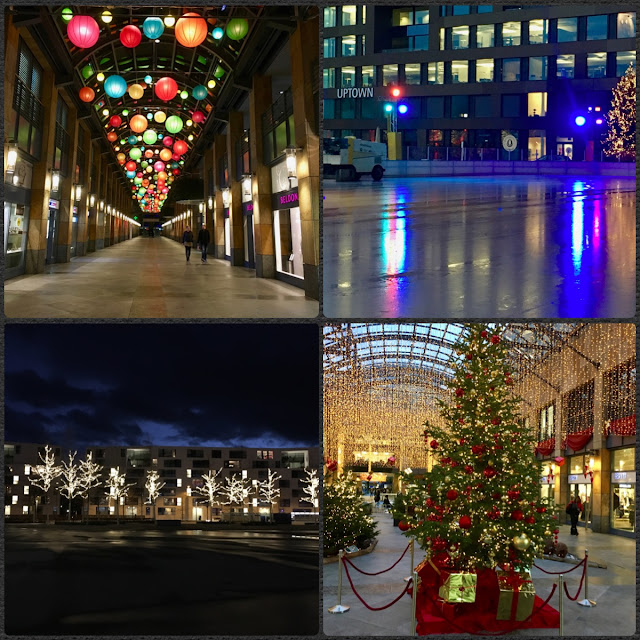 I conclude this A-Z challenge with a picture of Zug the night before the Super Blue (Blood) Moon Eclipse that was taking place January 31, 2018. 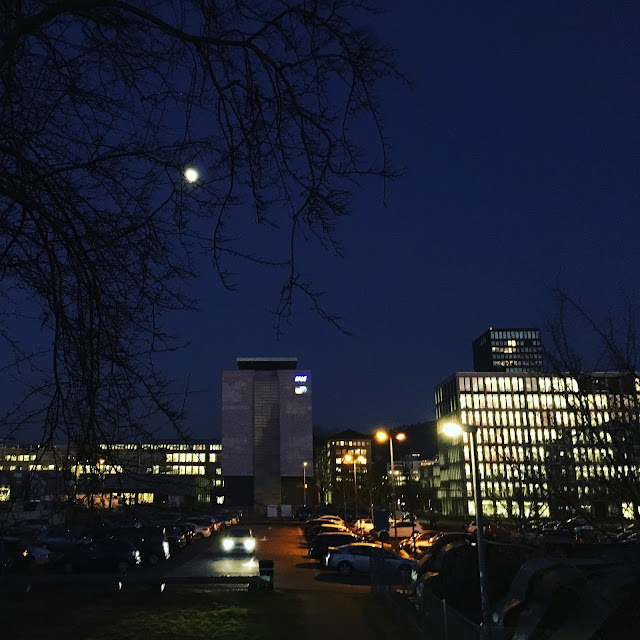 Thank you for following me to Amsterdam, Boston, Cape Town, you name it - I hope you liked exploring our last destination, Zug, with me! Here's the link to the other Z posts.

Next Monday there will be a reflection post on how this year's A-Z went, please be back to check that one out.

In the meantime there will be three posts being published this week (plus summer off-ice practice starts - no rest for the weary!):
See you there and let's keep in touch: