Now define "milk". If it is the last cup you wanted for your cereal, or to bake a cake, it's no fun.

Personally I'm not a milk drinker, but I try to use the analogy for wine. It would certainly be a shame to spill wine. Especially in these desperate times.

Still, I don't think it would be dramatic for me to handle. We're not in South Africa, where alcohol has been banned during the pandemic. So one can always purchase a new bottle. If one has not had the foresight to build up a supply, that is.

Kidding aside. Most things are bearable and replaceable, except your health and your life.

Looking back 15 months (and probably counting)  I feel sad.

February: during the last minutes of a game that they were about to lose anyway - so there was no reason for the opponent to charge him - he got a check to his head, resulting in a concussion.🤕 Boom. ER visit and out for another two weeks. If I remember correctly. he went back to practice for a two weeks' maximum when...

March: the grown-up team's franchise was finishing up their regular season and was just about to start the playoffs, when the first 😷 Corona-related precautions were taken: No events with more than 1,000 people attending, meaning ghost games. No audience! Junior games were announced to happen without visitors at first, but ultimately got canceled altogether.

April: this is when they have their regular time off, spring break, after-season, whatever it's called. Usually a good time to relax and enjoy the play-offs, but nope, they got canceled. With a full-blown lockout in place there was nowhere to go during school spring break. No outings, no shopping 🛍️, no zoo 🐆, no restaurants 🍝, not even a hair 💇🏼appointment.

May: The IIHF ice hockey world championship was supposed to be happening in my country🇨🇭!  Everybody had been excited, and many people volunteered to help set everything up. It got canceled.
June: After several weeks of distance learning, elementary school kids went back to regular school, including PE. No masks required. For the sports teams, on the other hand, restrictions still applied, resulting in summer 👟 training being held via Zoom 💻! Parents were sent a shopping list. We had to procure elastic power-bands, agility coordination ladders, dumbbells 💪🏻, you name it.
July: Fortunately it was decided to still hold the annual hockey summer camp. Precautions and restrictions were taken very seriously. Upon meeting, staff took the kids' temperatures, and a handful of youngsters had to stay home.
August: a whole new chapter began, Colin started middle school. School vs practice schedule were not looking good. His teacher recommended we spoke to the principal 👨🏻‍🏫.
He invited us, the president of the school board plus two of Colin's new teachers, and they ended up deciding (against current practice) "OK, you'll get the chance to pursue your passion as long as you are taking care of homework and catching up on (on average 3 - 4) missed classes independently."
September: friendly games and first championship games were being held. Audience allowed, hooray! At this point things were looking good. I honestly thought we were headed towards back to normal.

October: Colin played what was going to be his last game on October 17. The following week, the championship got suspended. The adult (Swiss) national league began its championship. Almost every week one or two teams had to go into quarantine. Game schedules had to be adapted a lot. As I'm typing this (mid March) one team still has to catch up six games. Edited mid April: Not every team was able to fulfil the targeted number of games. Instead they got "awarded" the average number of points they achieved in the games they played all season.
November: Fortunately, for children younger than 15, practice was allowed to continue. They wore masks in the locker room and took showers 🚿 in small groups. Restaurants were still open (observing protective measures) so parents could wait at the sports bar 🍹. In order to make up for the missed championship games, our club set up "internal" games. Every other week the players within the training unit played against each other.
December: Another lockdown. Shops (except groceries) and restaurants had to close again. They even removed benches at the supermarket. There was literally nowhere to go during practice as we were not allowed access to the arena. It was cold ❄️ outside, too.
January: See above. The junior championship got officially cancelled.
February: See above. And just so you get an idea of the time investment we still made every single week, here's his schedule: 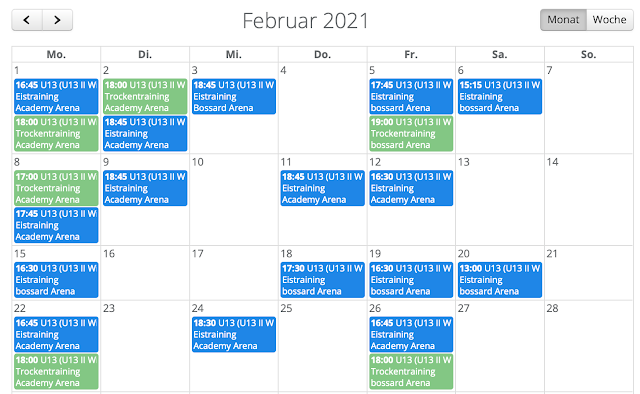 March: See above. Except kids are allowed to play against outside clubs again, so our coaches organized three friendly games. Yay! Still no audience though, and nothing open to wait. More bad take-out in the car 🚘 and overuse of my mobile data 📱. Last practice of the season on March 26.
April: Spring break. Adult league's Play-Offs started this Tuesday!
Now you can say, it was just a year, and he's still young, there'll be more seasons.
Yes, but this should have been a unique year because in his age group U13 there are still so many kids that they're divided into three performance categories, and he got to play in the middle group.
What's the difference? They get to play against a variety of teams within a larger geographical area (meaning 5am wake up calls and long travel times, so I'm not mad about missing out on this part) instead of the same old neighbour clubs.
As he progresses to U15 there'll only be two groups: the aspiring professionals and the regular players, so he'll be back to competing locally. He'll still have fun with his teammates, and that's the most important thing,
I just feel he got robbed of this unique year. Not just in hockey. Graduating from elementary school would usually come with fun activities like camps and parties. Same goes for his first year of Middle School. Plus as his school curriculum progresses, it'll be harder to get out of class early, and even if he'll get a free pass in the future, there will be more homework and study time to consider.
So forgive me for being grateful that we're alive and healthy but still crying over irretrievable times. The good news is: he's being totally realistic and understanding about it. "It is what it is".
How about you? What do you cry about if not milk?
Let me know in the comments, and please include the direct link to your own post, so I can easily visit.
Tomorrow let's remind ourselves that Networking is an enrichment program, not an entitlement program
Don’t cry over spilt milk hockey ice hockey world championship junior championship pandemic practice season