Use Your Words - Baby's Breath 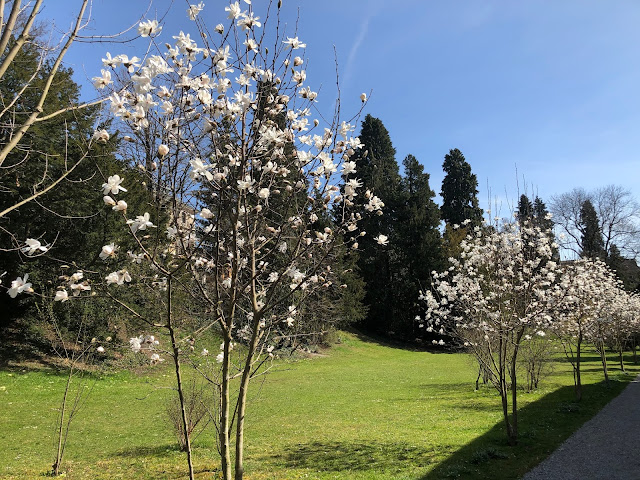 Baby ~ breath ~ leave ~ separate ~ knowledge
They were submitted by: On the Border  - Thank you, Diane!
Guys, I've just recently obtained new knowledge on where babies come from. And it took my breath away, too.
Babies are indeed being dropped by the stork, and they come fully clothed in either baby blue or pink!
You don't believe me? I have proof! I saw it on Facebook!!! 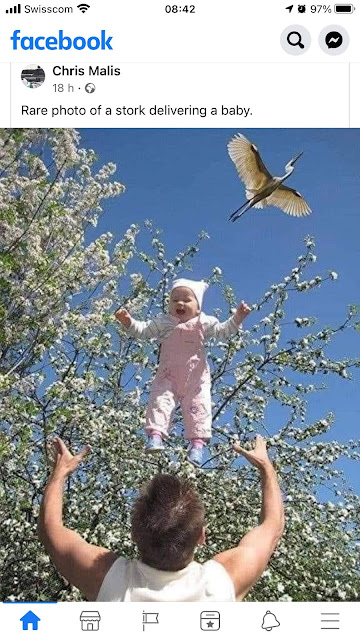 How are you doing?
This month has been crazy in many aspects.
For the 7th time around I'm participating in the A- Z Blogging Challenge, let me paste a link to today's post, which is Networking is an enrichment program, not an entitlement program to represent the letter N.
Yes, I chose to write about phrases, quotes and sayings, and there's plenty of them out there. Of course as the letter X rolls around, I'll have to bend the rules a little bit. Have you ever heard of a Xenopus? Bear with me...
On top of that I'm also busy researching for a separate blogging challenge. You'll get a prompt, and you have all month to come up with five pictures representing this theme. Why am I even telling you about it? Well, April's assignment is "Drink Up!" So without glorifying alcohol, you may have some suggestions or collaboration ideas for me?
I understand though that it's not bon ton to be a casually drinking, white female?
Apart from finishing up my own posts and visiting my fellow bloggers' contributions, there's still my day job I have to attend to, all the while this and next week my youngster is not only off hockey (end of season 2020/21) but school (spring break), and if I don't take countermeasures, he'll spend his days in front of screens.
In Colin's defence, he is not playing mindless or violent video games, he's gotten very interested in politics, elections, parties, etc. So much so that he's gotten addicted to watching John Oliver. and he's been catching up on old episodes that go back to 2014?! Plus he's gotten re-elected as governor of Minnesota in the Political Machine Game, and let me tell you, if it were up to him in real life, he'd do what needs to be done!
At some point he'll run out of "internet time", forcing him to help me in the kitchen, and he's been doing a nice job: 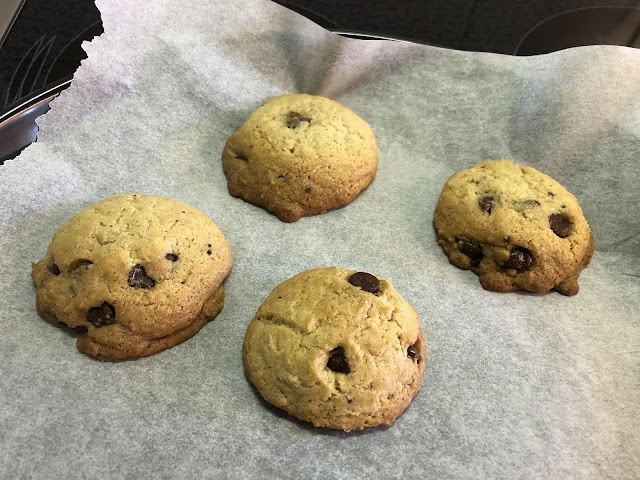 After a tough trial shift, during which I had to craft articles about newly hired hockey coaches and players, injury notifications and the like, based on international news platforms, think Sweden or the French part of Switzerland, in their respective language, I got "hired" as an online editor trainee.
I got access to their TweetDeck, and I'm utterly overwhelmed. I'm supposed to add and organize columns, and I need a Windows --> Mac emulator tool that allows me to use the "Website Watcher".... Have mercy! 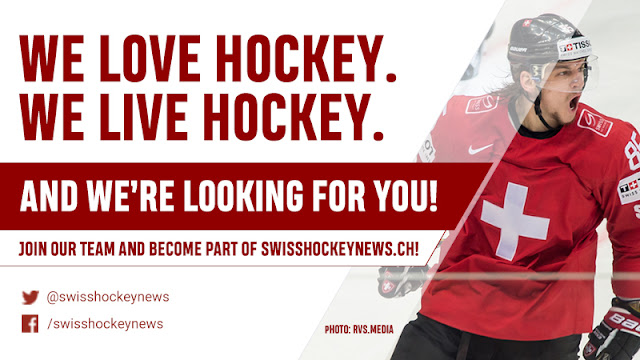 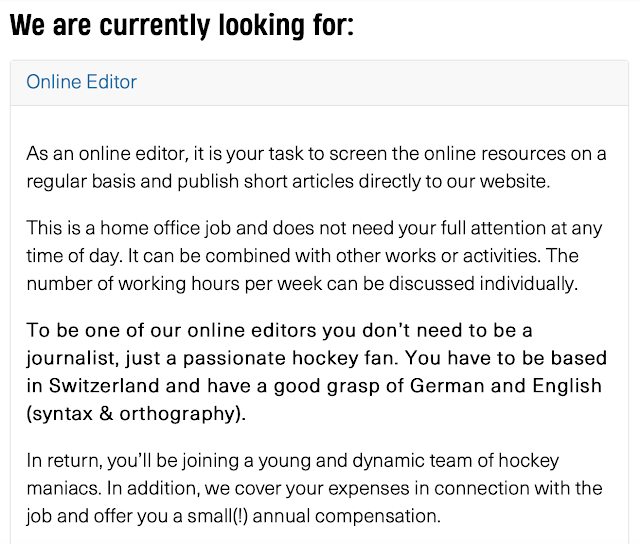 The weather has been showing symptoms of bipolar disorder. One day we'll walk around short-sleeved, enjoying blue skies and fabulous spring vibes. I'm obsessed with magnolia and cherry blooms this year. I'm keeping a list of spots, and I try to re-visit and check up on the progress. 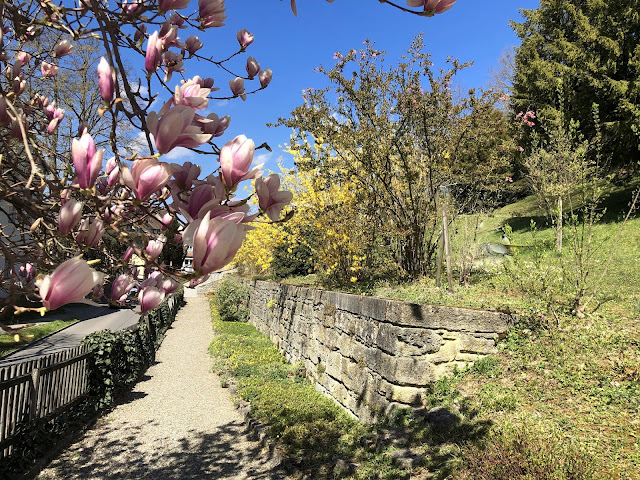 The next day we'll wake up to snow-covered rooftops and lawns. Good thing I didn't put my miniature Christmas tree away just yet. 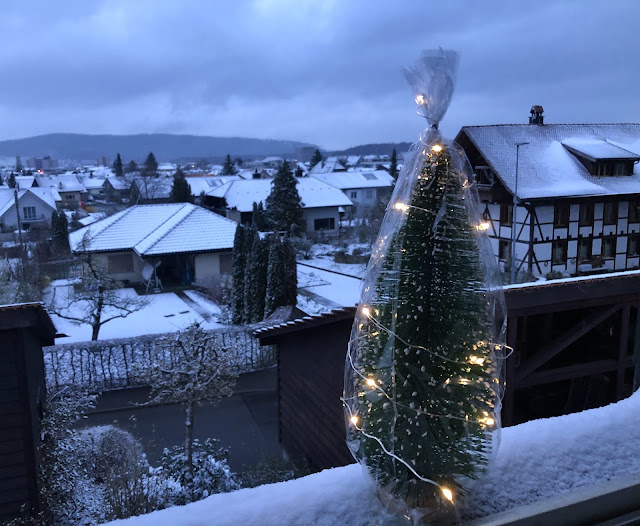 So far this has happened three four times this month, and we're only halfway through?
Back to flowers. They are doing such a great job reminding us to stop and smell them. 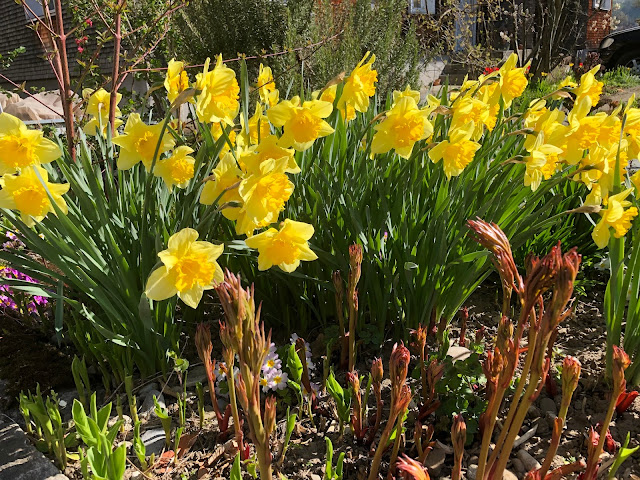 What you call Baby's breath in English is "Schleierkraut" in German. It literally translates as "veil's weed". Since I wanted a picture of it, I went to a flower shop and had a little bouquet done. 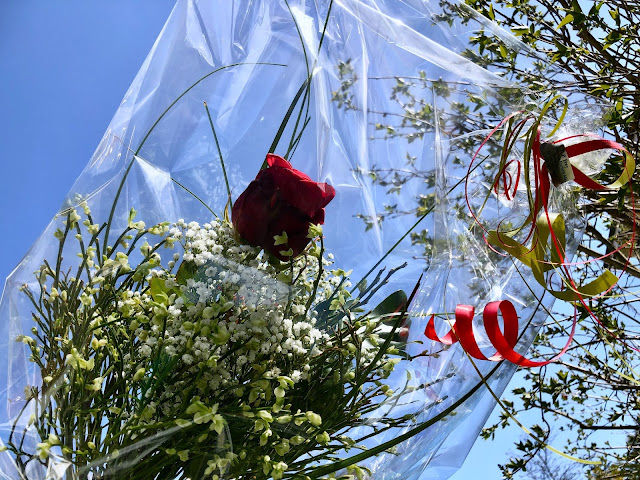 I was trying to come up with a good reason to buy flowers, and I actually found one. It was my mother in law's birthday that day. She would have turned 82 this year, but she had to leave this earth even before Colin was born, so she never even got to meet him.
Speaking of MILs. A few weeks ago I got an obituary notice. My boyfriend from way back's Mom passed away in March. I was surprised he felt the need to tell me. After some back and forth and a bit of fighting when we finally called it quits over 25 years ago (yikes!!), we are on good terms, meaning every couple of years we'll text each other happy birthday.
Now his Mom... When we first met, I quite liked her. Both his parents, for that matter. Then a lot of stuff happened that changed the family dynamics for the worse. His Dad ended up moving out, leaving the Mom upset and irritated. My ex and I tried to pick up the pieces, but she did not seem to appreciate it.
The last time I actively remember having interacted with her, I had invited her for dinner to my apartment, where I had been living for at least 4 or 5 months. I mention this to point out I was fully settled in and equipped.
She arrived, certainly meaning well, bringing boxes and boxes stuffed with pre-cooked food, pans, pots, containers, trays, basically her entire kitchen. I told her thanks, I had everything under control, would she like a glass of wine and relax?
Instead she proceeded to inspect my cabinets, drawers and fridge, lifted the lids of the pots I had on the stove, and I was very offended. Did she think I was not able to take care of her son? What kind of person intrudes someone else's privacy like that?
Even during dinner she kept trying to force her food upon us, but at that point I felt like she should just eat what I made and STFU, and frankly I didn't want her #$@&%*!-ing broccoli!
Looking back I feel sorry for her. Long before she and her husband separated, the older two "kids" had moved out, gotten married and had kids of their own, only my ex, the baby, still spent some time at home during semester breaks from university. As long as I had lived with my parents, the two of us would often be at his - hers - place, but as soon as I had my own apartment, she must have felt I took her boy away from her, which of course I did in a way.
After our break-up he moved in with his brother, so it wasn't just my influence that kept him away from him Mom.
Anyway, she passed away, he told me about it, and the ball is in my court now. I immediately purchased a condolence card, and it's been sitting on my desk. I can't seem to find the right words. I mean, going beyond the usual, somewhat empty phrases.
I have no hard feelings towards her (and her broccoli). I haven't particularly been thinking about her in the past years. I don't know how my ex's relationship with her evolved. Were they able to patch things up? Is he sad, is he relieved? Do I need to know this at all?
If you have any wise insight at all, please let me know below, and don't leave before checking out my blogger friends' posts: