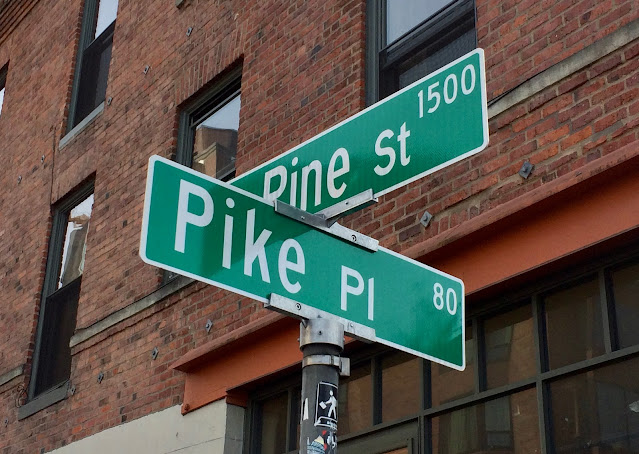 Welcome back to my Coffee Journey, I'm happy you're here!

Today we're going back in time, talking about Pike Place.

Technically it was not.

The very first Starbucks Store was opened March 31st, 1971 by three friends by the name of Gordon, Jerry and Zev, and it was located at 2000 Western Avenue. Click here for a picture of the original store they converted from a former junk shop.

Later in 1970s, the boundaries of the "Pike Place Market Historical District" were defined, and the three Starbucks guys found themselves located just outside this protected area, meaning their building was going to be demolished. 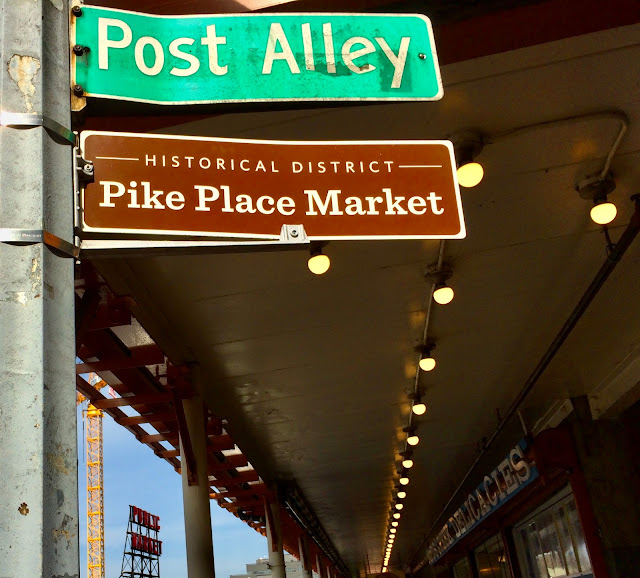 That's when they moved a few hundred feet to 1912 Pike Place, the store we know and love: 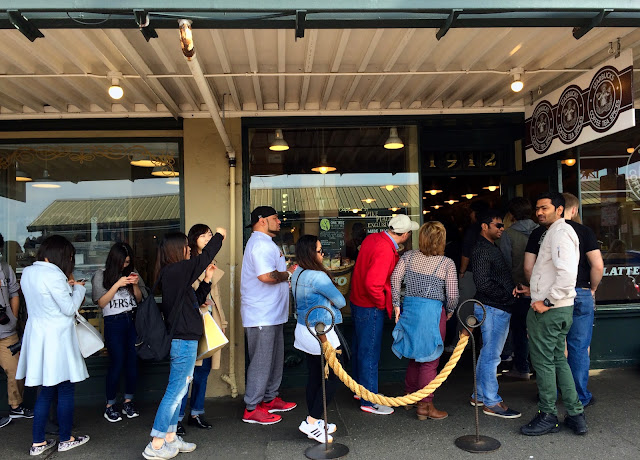 However, for the time being, they did not "make" coffee there. Meaning, you could not order a latte or a cappuccino. It was a colonial goods store where you could buy whole bean coffee, tea and spices.

Let's talk about the Pike Place Market for a minute. 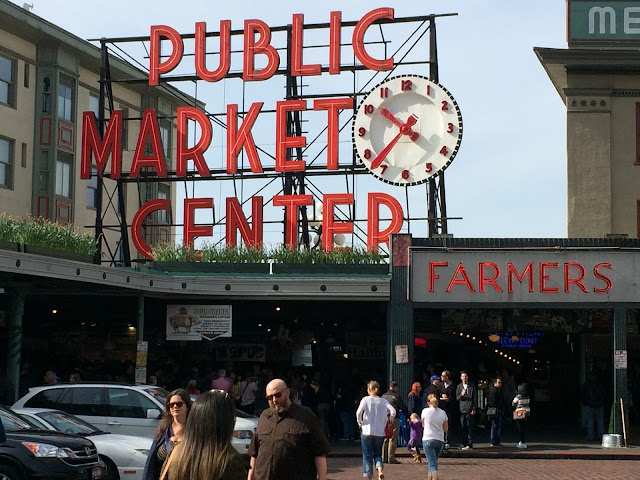 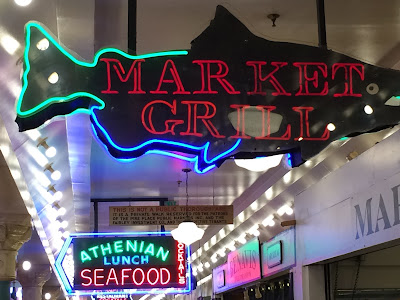 Do you feel you've seen this before? Here's a hint: it's where Sam shops.

In one of the first training videos you are going to watch if you're a new Starbucks partner (employee) you will see the guys who work at the fish market.
They talk about how it used to be an undesirable job: getting up early in the morning, spending many hours in a cold and smelly environment, touching raw fish, so they decided to do something about it and turn their job into a fun one! 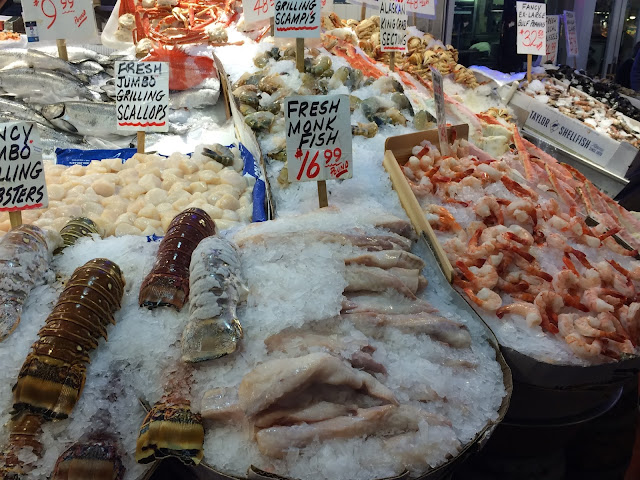 How?
By throwing the fish!
You heard right. After the customer has chosen the fish they wanted to buy, the fishmonger would throw that very fish to his coworker at the register who would package it for the customer.
Starbucks picked up on this and is tossing cups at their Pike Place Store. Empty to-go cups, that is ;-) 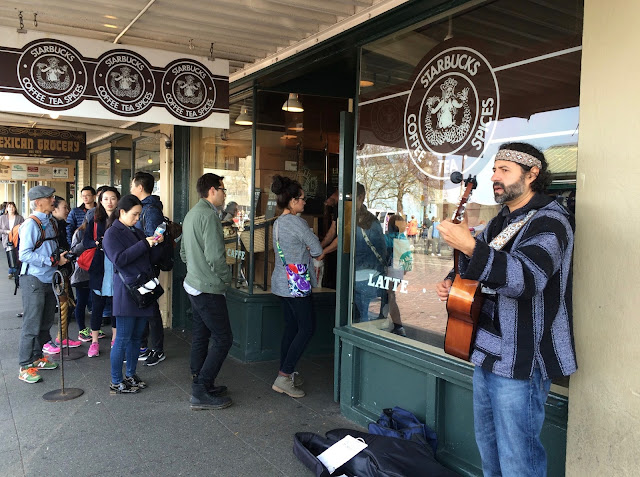 Once you have overcome the long line and make it inside you'll discover that everything in the store was left as it originally was: the floors, the fixtures, the counters...
If you have a chance to visit, make sure to buy some wonderful coffee beans: Pike Place Special Reserve (read more about it and the fact that it is totally different from Pike Place Roast here) It's my favorite kind! 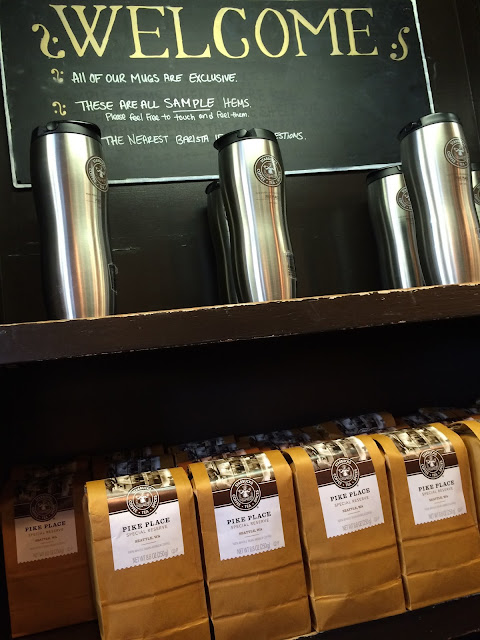 If for some reason you do not want to queue, you may just walk two minutes to Pike / 1st street. They sell the Special Reserve, too, minus the waiting ;-) 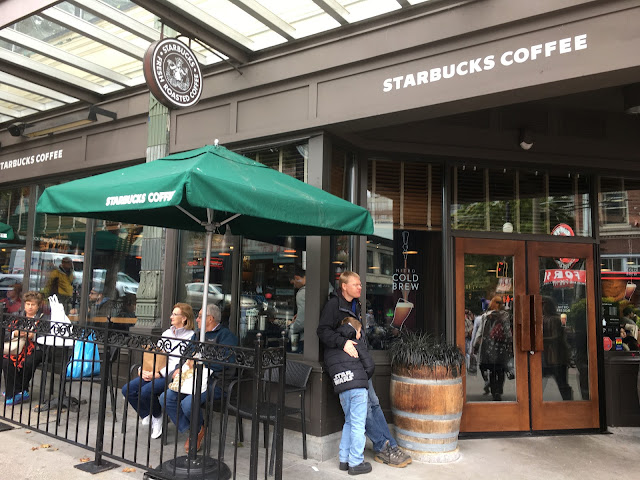 In the beginning of tis post, I cleared up the common believe that Howard opened the Pike Place Store.

Even though he didn't, I think he considers this his special magical place. Even after stepping down as CEO several times, he always kept a key and would go there after hours when he needed to regroup. I understand he also makes it a point to visit Pike Place every year in preparation of the annual meeting. He'll go there, order a doppio macchiato and reflect on how far the company has come.

So now that he's back on the team, I'm pretty sure he spends some time at Pike Place on a regular basis.

When we visit Seattle, I always make sure to stop at Pike Place.

Have you been there?