September 29, 2019
I started this post two years ago after our high school reunion I co-organized.

The first part of our get-together was a guided tour of the year round "Home" exhibition that was taking place at our town. 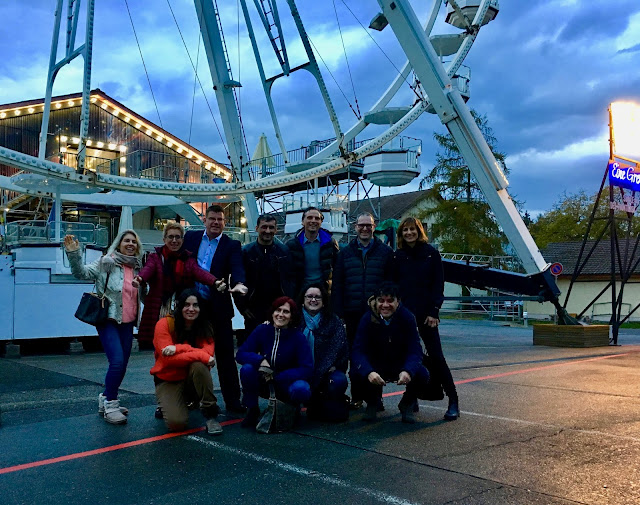 A special highlight was the Ferris Wheel ride during which passengers are supposed to ask each other questions (check out this website, it's in English) regarding their "home":

Of course due to the fact that some of us  - even though this was the fifth time we met since graduation - haven't seen each other for as long as 20+ years, we had a lot of catching up to do and didn't stick to the questions, but I'd like to do so here, and I encourage you to answer them for yourself as well:

I consider Switzerland my home. I was born and raised here, and apart from the too short period I spent in California, I have always lived either in my childhood village, Staufen, or Colin's hockey town, Zug.

Home certainly feels cozy, reliable, familiar, and family and friends play an important part. So much so that after 9/11 I wanted nothing more than to go home - to the people I have known and loved my whole life. With some of them I attended pre-school, Kindergarten, elementary school, high school, even the same college! They knew me when I had braces, crazy hair, questionable outfits - we literally grew up together.

Many said "home is where my heart is", and I think they're totally right. Some of my classmates live in UK, Germany, Italy and Spain today, but they all made it because spending a couple of hours with their old classmates was important to them. Only the one who lives in Australia couldn't make it, and I can't blame her.

Does home has a smell? I would like to think that Switzerland smells crisp (alpine and all, never mind the crowded cities) with a hint of cow sh** and of course a delicious whim of chocolate - due to the Frey chocolate factory being located only five miles from here!

Home-home, my parent's home smelled at its best after baking. Think apple pie or chocolate cake or Grittibänze.

Switzerland has certainly a few unique sounds like cow bells and church bells. Our emergency vehicles' sirens sound differently than in the U.S.

Does it require tradition? I guess home is an accumulation of tradition. My friend Annette who moved to Canada in 2013 misses our recurring customs like the youth festival and the turnip parade the most. Tradition, in combination with the people you meet on occasion of  these festivities, certainly contribute to the homey feeling.

Is it possible to find a new home? To me this is the toughest question. I think whatever new home you make (and it takes a whole lot of positive attitude and hard work), you'll probably always compare it to your first, real home. But personally I do believe that you can find a new home someplace else. Because, after all, home is where your heart is!

Back to the exhibition two years ago. One of the activities was to go from voting box to voting box. Participants had to answer questions on "Swissness". The one that provoked most controversy was "are pasta and pizza part of Switzerland?" Us Swiss thought sure, while Italians said wait a minute, that's kind of our domain! 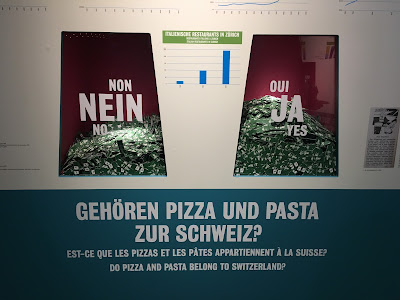 And here's where I want to pick up on the discussion leading over to yesterday's events.

Our schoolmate Concetto's parents shocked him and us in the mid 1980s when they decided to leave Switzerland and move back to Sicily where they were originally from. His Dad had a job offer that required them to pick up and leave pretty much immediately. He didn't even get to finish the school year with us.

Concetto was born in Switzerland, attended Kindergarten and school with us, and while he felt he was considered "the Italian" here, as soon as he arrived in Sicily, they called him "Svizzero" = Swiss guy. He was lonely and felt out of place for quite some time. We sent letters, and he started working for a local radio station where he taped his shows and sent them to us. Just imagine the possibilities today, we could have FaceTimed and sent pictures and sound files back and forth in real time!

Eventually he made new friends, attended university and became what he always wanted to be: a journalist. Today he's married and a Dad to two teenagers, writes for la Repubblica. And he is an author. Even though he has written other books before, the one that was published this year is probably what is called the big breakthrough. 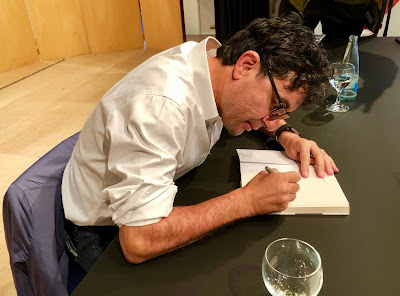 Concetto presented this book in Switzerland this weekend: an event in Zurich on Friday, and one in our town yesterday.

Former teachers, classmates, neighbours and friends were flocking in, they had to add way more seats, and the location was super crowded. 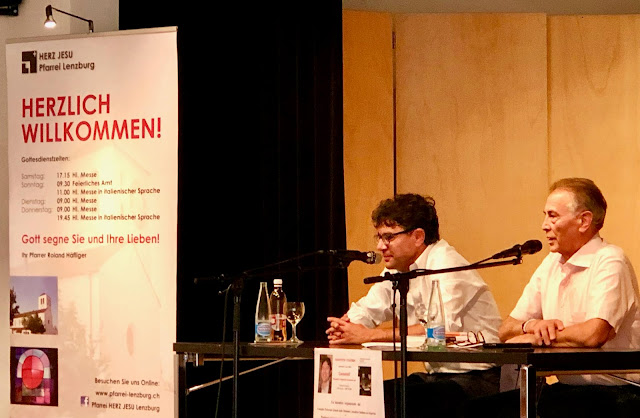 The book is called «Cacciateli! Quando i migranti eravamo noi» («Throw them out! When we were the immigrants») referring to Schwarzenbach, an early 1970s right wing populists' initiative to, well, throw out all these annoying foreigners - whom us Swiss actually sought after to build our tunnels and streets because in a country of full employment we didn't have enough of our own manpower.

Italians represented the first substantial group of foreigners to settle in our country, and obviously my fellow Swiss felt threatened.

As a kid I didn't realize this (sometimes not so) subtle xenophobia. Quite the opposite actually! I thought my Italian classmates were much more fun than some of the dull Swiss kids!

Well, today, Italians in Switzerland are the ultimate poster children of assimilated, productive citizens, and the conservative Swiss have found a new group of foreigners to give a hard time to, but Italy itself has its own right wing populist now. His name is Salieri, and he kept refusing authorization for refugees from Eritrea and Somalia to disembark this summer.

Looks like when Italy won the world championship in Spain back in 1982, the Italian kids suddenly felt valued in Switzerland. Needless to say the Swiss national team didn't even make it to the tournament! (Plus today's Swiss national team probably includes two or three orginally Swiss players, all the others are secondos, respectively the next generations.)

Not sure if secondo is a know term outside of Switzerland. It's what the kids of immigrants are called. The second generation that attended school here. Most of these kids had to accompany their parents to parent teacher meetings to translate. Typically back then poor  Italien immigrants who found low paying jobs in Switzerland came from remote rural villages and some could barely read or write Italian, let alone (Swiss) German.

Before this text gets too lengthy (and I have to write my own book, haha) I want to conclude my post by sharing some happy pictures of my high-school mates whom I rounded up for happy hour and dinner following the book presentation. Bonus points for our teacher to join us! 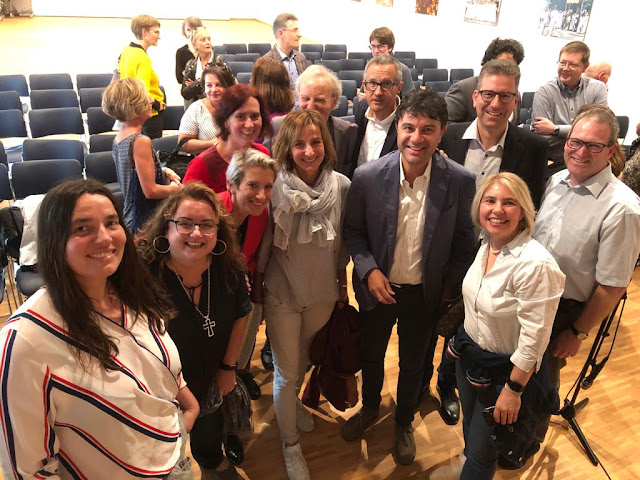 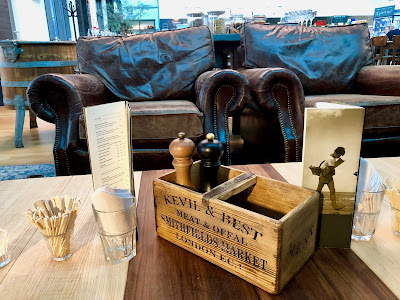 I feel truly blessed to be part of this gang. The food was excellent, too. 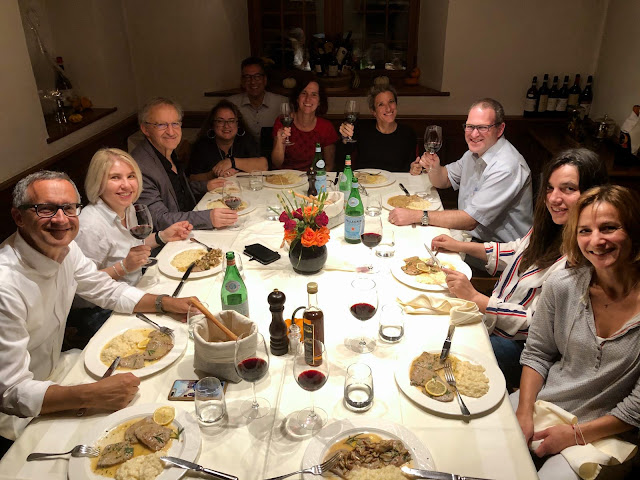 Now - you knew this was coming, right - Question: what does home mean to you? What does it feel like, is it possible to find a new home? What does it take? Let me know in the comments down below or on my Facebook post.