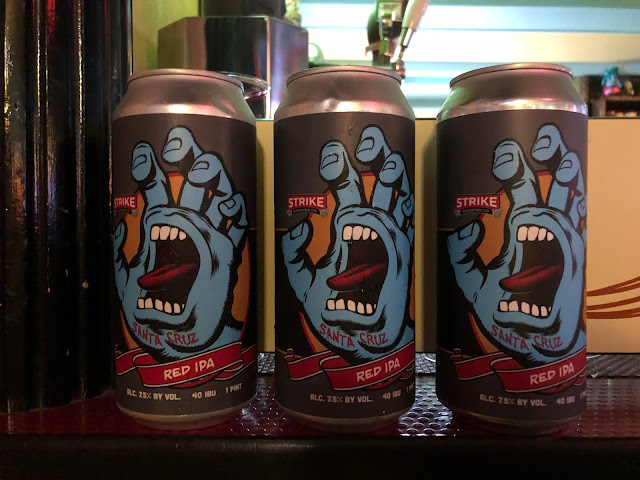 It's been a long day,

Looking at your initials, it's pretty obvious how this sentence is going to end:


I've had two (and more) of these nights recently, and for some reason both were Fridays. It's always the Fridays, right? Not only has it been a long day, but it has been a long week as well!

The first one was February 28.

The day started out hopeful. We were going to go out for our company's "Christmas" dinner. If you've been around, you know we like to do it sometime into the new year, once things calm down, and people don't have a lot of plans. I usually use the UYW post to tell you all about it:

One year I accidentally added Mongolian Fire to my dinner, and it was a little too hot for me. The next year my Mom, who was supposed to babysit Colin, became sick, everybody else was on ski break, and I almost didn't get to attend our dinner at all.
In 2016 we learned that one of our coworkers had been involved in the great post robbery, and the following year someone left an anonymous love message on a coworker's car!
Not sure what happened in 2018, I can't even find a UYW post? In 2019 we didn't just do a simple dinner, instead - celebrating our company's 25 years' anniversary - we spent an entire weekend in Copenhagen, Denmark.

Back to February 2020. We were supposed to go out for this year's dinner.

All was arranged as follows:

At 3pm I was going to drive Colin to his first hockey practice after recovering from his concussion. He was looking forward to seeing his teammates and to getting back on the ice.

After, a lovely fellow Hockey Mom was going to take him and her own son to the last home game of our "big" team, and then the boys were going to have a sleepover at their house, and I was going to pick him up Saturday morning. On this particular Saturday morning Colin's school was doing parents' visitation day. I had asked for this day off so I didn't have to get him at 6:30am at his friend's house.

The Corona virus had reached the Italian part of Switzerland, and the two teams in that area already had to play ghost games - no audience allowed. I had made a mental note to check on our team's website to make sure the game Colin was going to watch, was actually happening.

Things got busy, I was on the phone all morning, and at some point I got a few minutes of peace and quiet. That's when I heard hubby voicing in disbelief "They've cancelled what? You're kidding right?" After he hung up, he said "Basel authorities cancelled Carnival."

Now the Basel Carnival isn't just a lousy parade. It's the annual three days' event, local people call it the three coolest days of the year, they get paid days off work, most local businesses are closed, this is how seriously they take their carnival.

We went online and stared at the announcement:

Our federal council ordered that all mass events were to be canceled as of right now!

Definition of a mass event being more than 1,000 people.

This included hockey games. All of them, the entire league.

Sure enough, right this moment, a notification popped up on my phone. 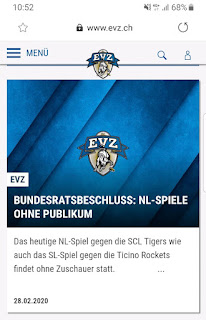 Translation: today's games are being held without audience.

Of course it didn't take long, and my friend texted: "Did you see? What a mess. What now?"

I could only hope that at least Colin's practice was happening. Since I told my Mom that Colin was staying at his friend's, she made plans for the night herself and wasn't available to babysit.

Practice did happen, and it was going to be one of the very last of the season.

Bad news kept popping up by the hour this afternoon. Events canceled, celebrities confirmed COVID 19 positive, I was glad to get out of the office and drive my boy to the arena. We had a stunningly clear view. On my way back I stopped and took a picture. 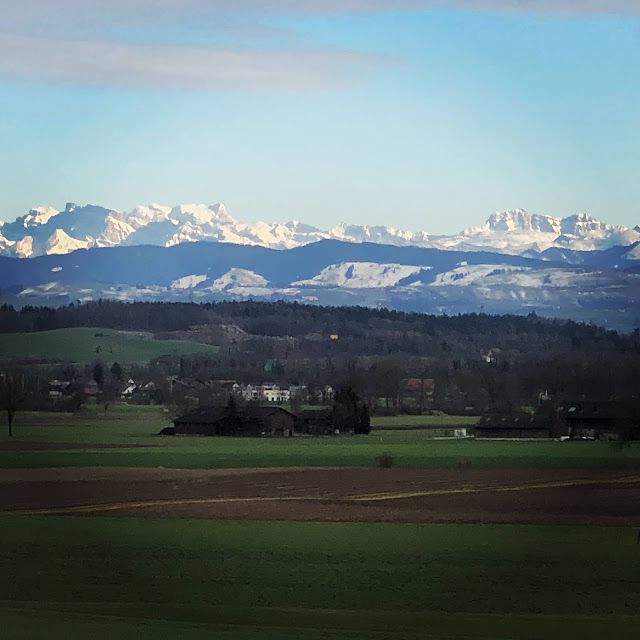 Little did I know back then that driving around or taking a walk was soon going to become a privilege.

I was almost back at the office, when my mobile phone rang. Colin's teacher.

She sounded very tired and / or very worried. "We have to cancel tomorrow's visitation day. I know Colin wasn't gonna attend class, but I still want you to know."

Wow. Were they expecting 1,000 parents and siblings?

Mom texted "are you guys still going to your dinner?" Sure, I tried to keep it lighthearted, but I was getting more concerned by the hour. This was not just a bad flu. This shit just became real.

When we arrived at the restaurant, the place was empty. What was going on? On a Friday night it was usually packed! You needed to make a reservation days in advance, for larger parties even weeks in advance! Turned out a lot of people canceled.

I don't drink beer, but if I did, I sure would have ordered a large one. Instead I had my Prosecco, even though I didn't feel like celebrating. 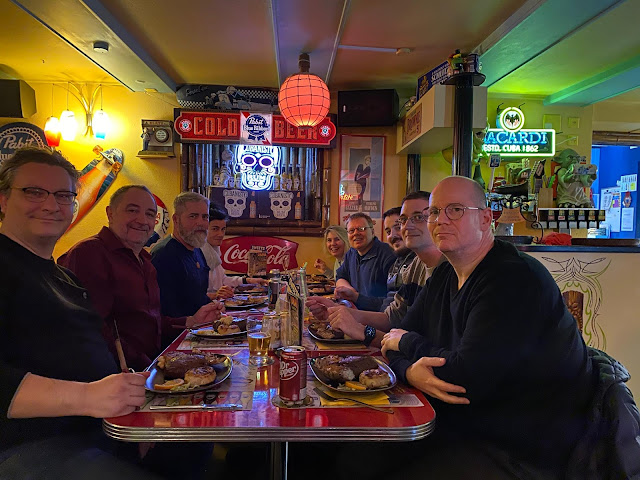 We tried to have a good time and enjoy our food, but somehow we kept talking about this virus, how it may affect our everyday life, and back then we still had no idea! 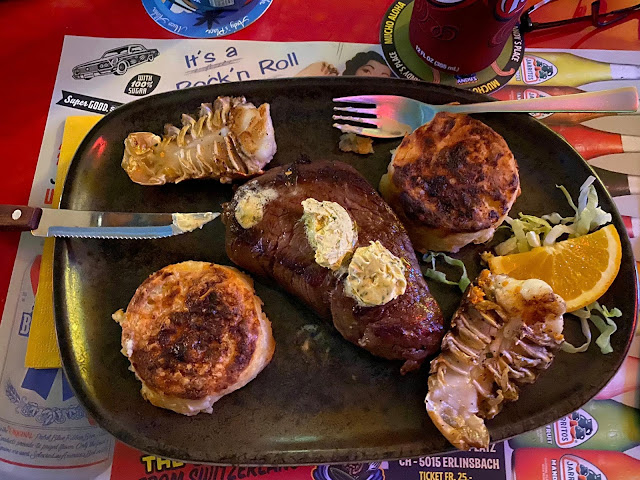 So two weeks later there was another of those Fridays. It was the 13th, probably not helpful. And wasn't it also a full moon, I believe? There you go.

The day started out hopeful. Colin was returning from ski camp. We were part happy, part concerned that the camp had actually happened. I wouldn't have been surprised if they had canceled it at the last minute. But they went, and they had a good time.

I think it was around lunchtime that the news reported about schools closing. I couldn't believe what I was reading. I think in the beginning it was more rumors, but at some point it was officially confirmed.

While this may be every kid's dream, it's every (working) parent's nightmare! If schools were closed, did the same apply to daycare?

We picked up Colin, took all his ski equipment and bags home, then we all went back to the office. 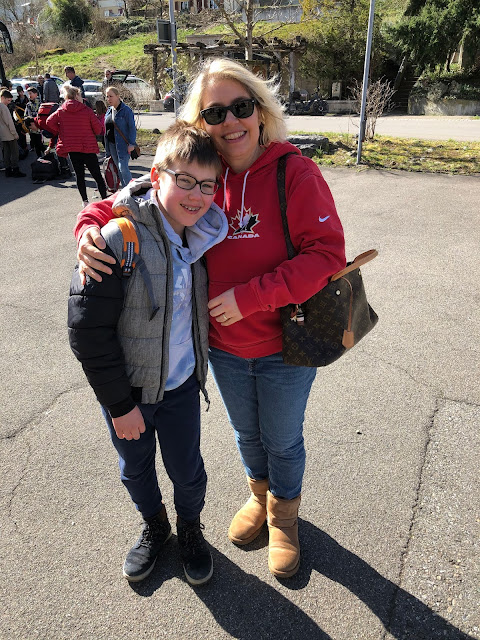 While we did so, every other citizen must have run to the supermarket, hoarding flour, soap and toilet paper, because shortly after that, the empty shelves pictures started appearing on social media.

There were new rules for restaurants in place: depending on the square footage of the place, a maximum of 50 guests were allowed in, and tables had to be 6 feet apart.

Something told me we were this close from restaurants getting entirely closed. After all it had already happened in Italy.

Friday, March 13 was the last time we went out for dinner. And I didn't even take a picture!!

Saturday, March 14, Colin's teacher sent an e-mail saying our state was closing schools for the remaining three weeks before spring break. There would not be any homework. Boom. That's when our Lockdown Project was born.

Saturday, March 14 was also the last time we had guests. With Colin's hockey practice, games and tournaments being canceled, we had time to celebrate St. Patrick's Day. 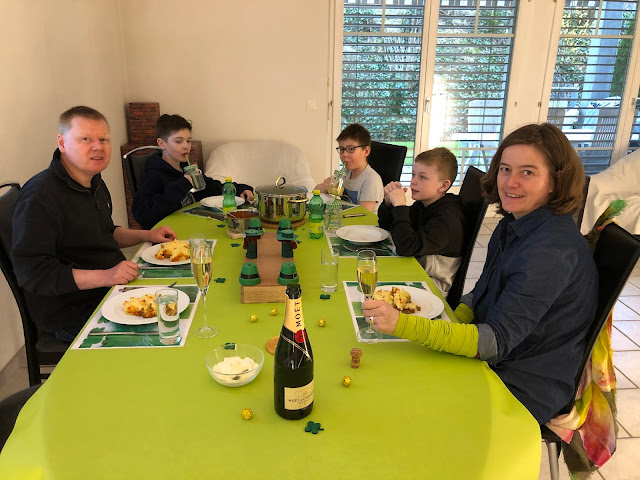 My friend D is the director of patient care at a hospital. Her regular work days are long gone. She participates in task forces, scrambles to reorganize processes, gather retired nurses, medical students, everyone who knows basic medical procedures. They created a staff daycare, so doctors, nurses and lab techs are able to come to work and bring their kids.

So while I may have felt like going home and hide underneath my comforter in the beginning, I have come to accept the ongoing situation and make the best out of it.

Yes, I missed my hair appointment by one day, and my dark roots are not pretty, it's annoying that people hoarded all the toilet paper and baking supplies, and I wished I could use all the quality time with Colin to actually get out there, exploring.

How are you holding up, coping with these difficult times?

Let me know in the comments below and don't forget to visit my fellow bloggers' posts!

The month of April is always a busy time for me due to my participating in the A- Z blogging challenge. This year's edition is all about my home country Switzerland. Today it's C is for chocolate, check it out.