Secret Subject Swap - All about me and the other me 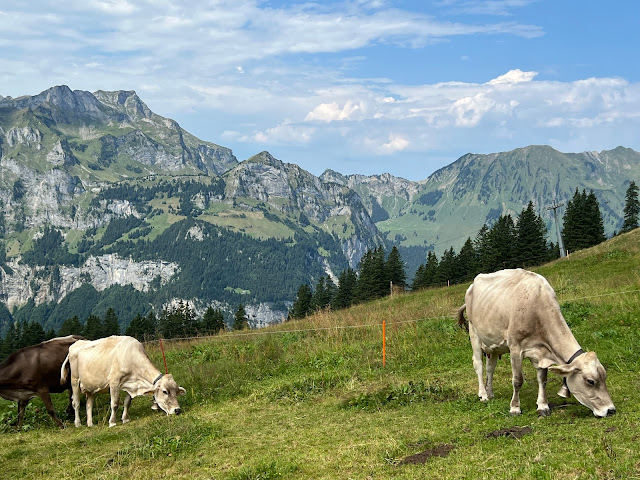 Again four brave bloggers picked a secret subject for someone else and were assigned a secret subject to interpret in their own style. Today we are all simultaneously divulging our topics and submitting our posts.
Here are links to all the sites now featuring Secret Subject Swap posts.

I guess, in my case it's all about me?
It was submitted by: The Diary of an Alzheimer Caregiver thank you, Rena!
Contrary to some people, I don't like to talk about myself. This may sound as odd as the fact that I didn't enjoy shopping for my wedding dress.
One of my supervisors back then told us in a communications seminar:
"Those who speak, learn nothing".
What he meant was, in a sales meeting you should spend most of your time listening to what your (potential) customer tells you instead of showering him with your generic pitch.
Since most people love to talk about themselves, their business, their product, their relationship, their vacation, etc. I have been doing well by just listening.
We have one person in our life who's not only super talkative, but also overly detail oriented. If you ask her how her two weeks vacation was, she'll start with Monday morning: what did they have for breakfast, were they able to pack everything into their suitcase, how did the trip to the airport go, how long were the lines at check-in, you get the picture.
Kudos to you if you manage to listen through the entire story until they returned home.
Usually by then the conversation will be over.
If not, she may ask "hey, you were away, too, right? Canada? Did you enjoy yourselves?"
Actually yes, thank you, it was great, my highlight was the gorgeous day at Lake Louise.
"Speaking of Louise, did you hear her son-in-law has a new job? Can you believe the previous company fired him? I thought he was doing so great, he had a fat company car, bla, bla, bla..."
Anyway. All about me may seems to fit into one small sentence, and I'm OK with that. I'll gladly tell someone who's genuinely interested, about our day in Lake Louise - and our lunch for that matter.
Over the years there have been a couple of posts about me out there:
If you're a Secret Subject Swap participant, you've known me for a long time, and if you had to describe me, you's probably say things like
Good natured, supportive, cheerful, always busy, wants to make everyone happy, organized...
At least that's how I perceive myself, and I think it's true most of the times.
Except, every few years, my brother and (part of) his family will be in town.
In which case It won't take long, and I'll temporarily turn into an intolerant, grudging bitch.
A few years ago I wrote a post about how he and his wife stood us up not once, not twice, but three times. I even went ahead to try and find excuses and explanations.
This summer was the first time they were back.
In the meantime our parents have sold their house and moved into an apartment. Meaning they couldn't accommodate my brother and his family. Not to worry though. My uncle's girlfriend, who left on vacation, gave them the key to her apartment, where they were welcome to stay for as long as two out of their three weeks.
They arrived late Tuesday night, and we met for lunch at my parents' the next day.
It was very nice to see them again, and frankly I didn't think about last time.
The main reason for their visit was my youngest nephew's bar mitzvah. He's 15 and wants to visit instagrammable locations and shop for brand clothes.
We told them what week days I work, and that Colin typically spends Tuesdays at his grandparents', and they (my brother) suggested to go someplace together next Tuesday.
Excellent!
Monday I had to make an appointment for Colin, and Tuesday morning was suggested to me as pretty much the only possibility.
I texted "so what's the plan for tomorrow, I need to know because C may have to catch up with you guys a little later".
Answer: "We are on our way to (insert destination)".
Meaning they had already left on Monday. Meaning Colin and my parents weren't going to be part of the fun. Meaning they didn't even think of telling us.
*Sigh*
Here we go again.
From time to time they posted on social media or in our family chat. Pictures of mountains, pictures of lakes, all in the Bern area (bear on the map below, the city's mascot), where they had the accommodation at my uncle's girlfriend.
Maybe I have to mention they live in a kibbutz in Israel, so they don't have a lot money. (Yet each of my brother's kids has felt the need to own an iPhone when they got their first mobile phone, and their parents have felt the need to comply.)
However the kibbutz / money topic is always in the back of our minds, and that is why everybody is bending backwards to let them stay with them, to invite them for meals, and in my Mom's case to give them her ca to get around.
The other day my brother sent a picture of a Ferarr to our family's chat.
Caption "Greetings from Monaco".
I was shocked.
I can't exactly tell you why. I just thought it was bold, and not in a good way.
My Mom immediately reacted.
"Oh my goodness, that far away? When are you coming back?"
Answer "Don't know"
Less than a minute later, my Dad replied, and I could tell, he was not only shocked, but mad:
"So what's next, are you guys driving to Portugal with your Mom's car?"
Answer: "Nah. Too hot there."
I was raging on behalf of my parents because I thought my brother was definitely taking advantage of their generosity. Plus I was pretty sure, in a few days they would end up in Paris. My nephew had mentioned he wanted to see the Eiffel Tower. 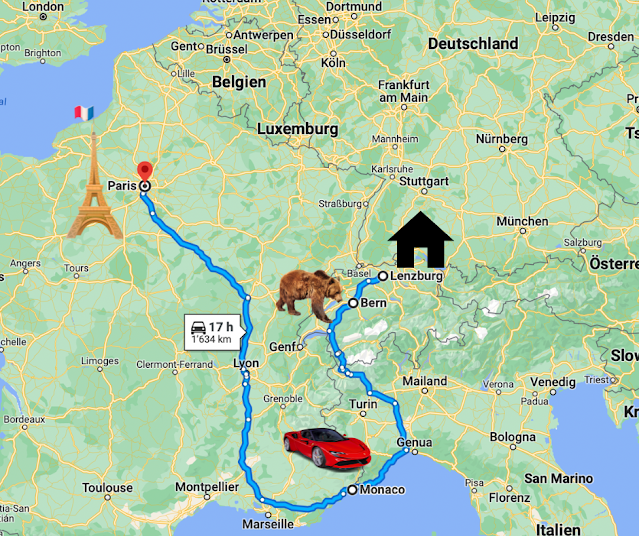 My Mom has never taken her car out of Switzerland. She doesn't even use it to drive into the city of Zurich. I am not sure about the car's, let alone the non-resident passengers' insurance coverage. If you rent a car in California, there will be a note in big, fat letters, prohibiting you from taking it to Mexico. I wonder if Swiss insurance companies have the same reservations about Italy and Southern France.
Several friends of mine had their car stolen exactly there.
And I couldn't even allow myself to think about French Parking. In case you've never heard of the expression, here's an example, and I've seen it happening many times with my very own eyes:

So excuse me for feeling protective over my Mom and for wanting to slap my brother and his family for selfishly taking advantage of other people's goodness.
If they went to Paris, they were smart enough not to post any pictures. I'd like to believe that they realized they overdid though.
Wednesday night, so two nights ago, they wrote in the family chat that their return flight went well, and that they have arrived home safely.
So during their three-week stay, they spent one lunch with my parents (and us). Plus there must have been the rental car return. That really shows their appreciation. Now that my parents have lost their status of "hub", by not being able to offer accommodation and daily catering anymore, there's no reason to spend time with them.
What does that even have to do with me? Why do I care?
I just think my parents deserve better. And I don't understand how my brother, with whom I share the same genes and upbringing, has developed such a different (in my eyes unacceptable) approach.
Allright. When this post goes live, I'm minding my own business 😎.
Hubby and I were driving to the mountain resort where Colin and his teammates have been training hard all week. We spent some quality time up on a 1,900 hill, that's 6,234 feet. 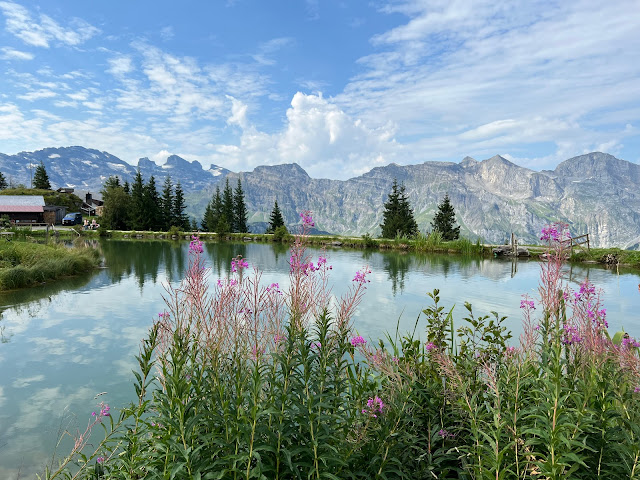 Now we're back down at the village waiting for a) dinner and b) rain. Both are scheduled to happen at the same time.
Tomorrow morning there will be an ice unit for us parents to watch, and then we get to take our son home. I missed him.
accommodation across borders all about you appreciation brother Brunni Car Engelberg Family opportunist Secret Subject Swap selfish taking advantage talkative travel