March 22, 2020
With schools closing with pretty much no notice and no assignments, Colin and I set up our own plan and committed to researching a different country every day: hear music, cook food, look at pictures, learn about what animals live there, etc. 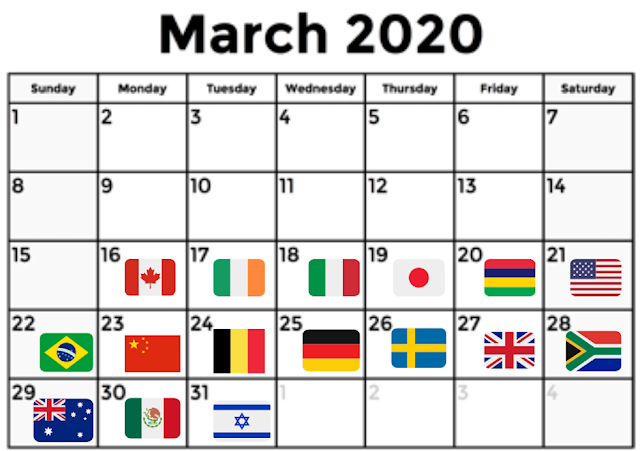 Here's what we have been up to this first week:

Pancake breakfast in our PJs. I got this mug from my Swiss friend who lives in British Columbia. I keep thinking of her because she knows all about being confined, isolated and scared. The they first arrived, they ended up living in a RV for three months because they didn't have a home yet. After they moved in, Canadian winter brought snow days, making them dependent on what they had stocked in their freezer and pantry, and one Canadian summer brought bush fires forcing them to leave their home, suffering considerable damage. 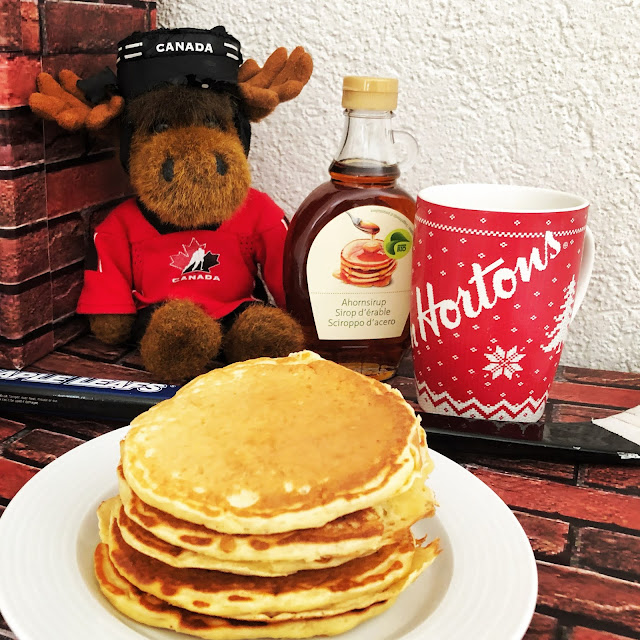 Later I had to leave for my teeth cleaning appointment. Colin was supposed to research about Canada's geography and culture.

On my way back I had the brilliant idea to pick up the DVDs we ordered. As it was going to turn out a few hours later, all "non-essential" businesses had to close later that day.

I also wanted to buy some groceries for the week. I couldn't believe my eyes!
Eggs, flour, yeast, pasta, rice, frozen veggies... gone! Empty shelves! I didn't check the toilet paper aisle, but I' pretty sure it was plundered, too.

Did you hear how a lady scolded a young man who had a cart loaded to the brim with toilet paper, tissues, disinfection spray, hand sanitizer and similar items?
"You should be ashamed of yourself, how can you be so selfish, other people need this more than you!" She told him and really got into a rage. He listened to her, and when she had to catch her breath, he asked "are you done? May I resume stocking the shelves now?"

When I came home he was staring at a live feed showing the spreading of the virus on a world map. He didn't say anything, but I felt he was upset and overwhelmed. Obviously taking away screen time in favour for lunch was not a good move, and he gave me a preview of to expect of his teenage years. We later made up and spent an OK afternoon.

I am hesitantly optimistic for the next days... 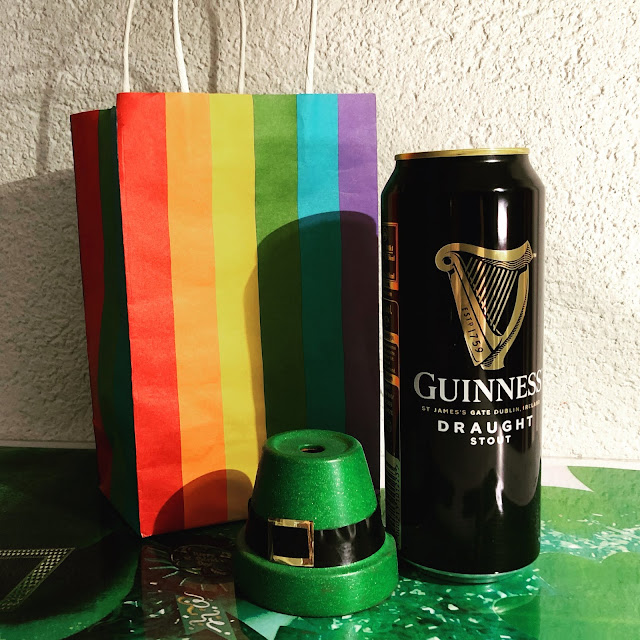 Good thing we had our party on Saturday, courtesy of all hockey practice and games being canceled. This was also going to be the last get-together for who-knows-how-long :-(

Hubby had decided that people who can work from home, will work from home. I belong to the small group who needs to be present to receive and process mail and goods, and since we don't completely work paper-less, I need all the binders that live at the office.

Grandparents are not supposed to take care of kids, plus my conflict with Dad was never really settled, so C installed himself in the meeting room to work on his country of the day 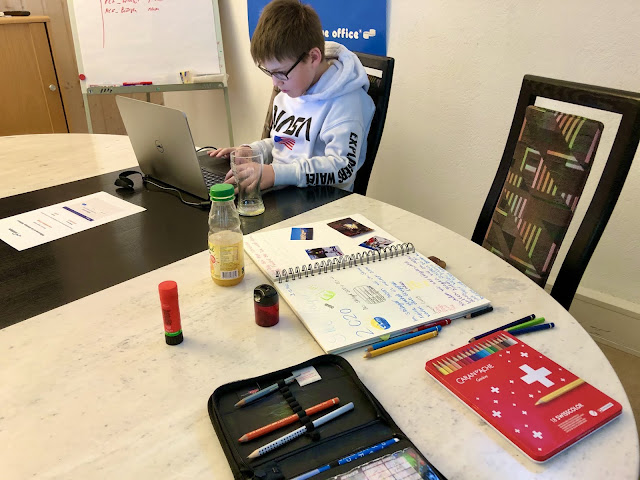 They also have to do some journaling for school, writing about their ski camp. 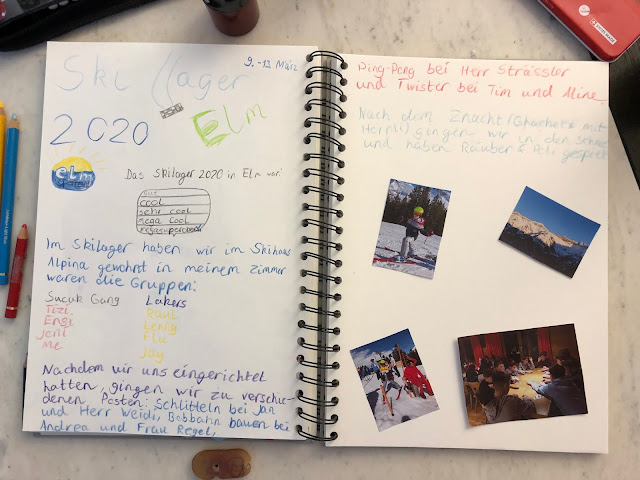 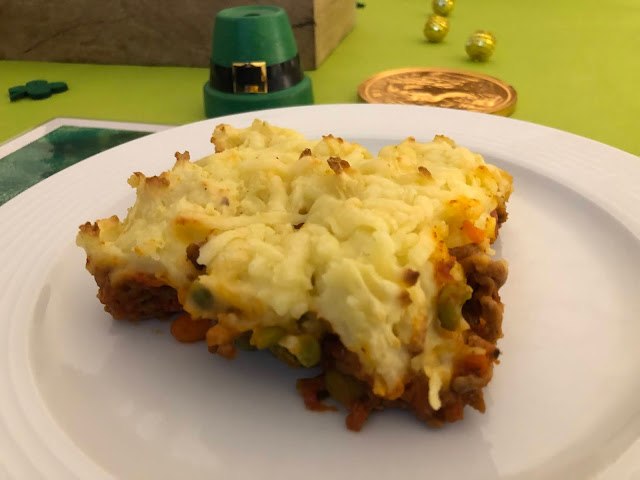 Let's be honest, the main perk of this international project is the food. What better excuse is there to eat pasta and pizza in one day than to be researching about Italy?

I used this day to think of my Italian classmates I had the pleasure and honor to grow up with. Even though they are from our immediate neighbour country, their culture couldn't be more different, and us Swiss - punctual neat freaks - are so lucky to interact with fun-loving, expressive folks! 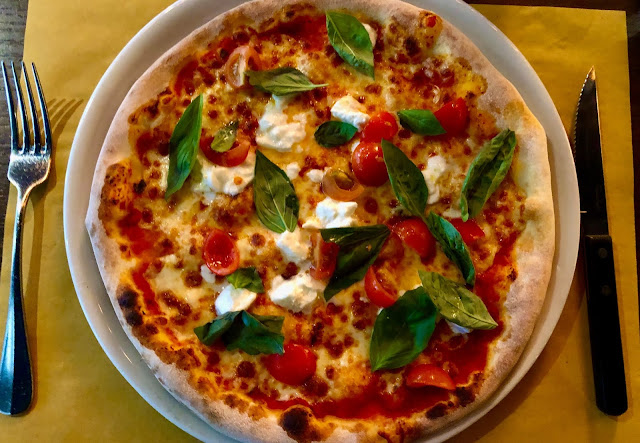 Today my overdue hair appointment was supposed to happen. Well, it didn't. I know it's a first world problem, but feeling good about yourself is crucial now. I guess in another week or two I'll be able to pull my hair in a pony tail.

By the way, part of our lockdown deal is we have to take a shower every day.

I was especially looking forward to this day, and you'll see in a minute why!

With restaurants closed, I had to do some research on local sushi takeout places, and I succeeded. This was our lunch. 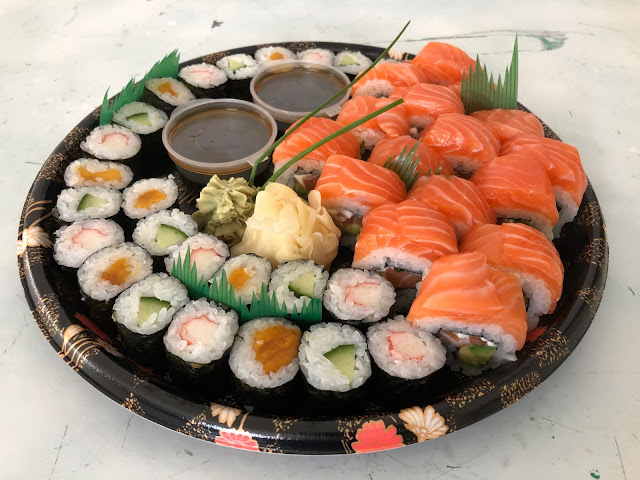 I have a Japanese airline friend whom I asked about places to see pink cherry blossoms around here. We ended up at Rieter Park in a quiet Zurich neighborhood. This is technically a magnolia tree, but never mind. 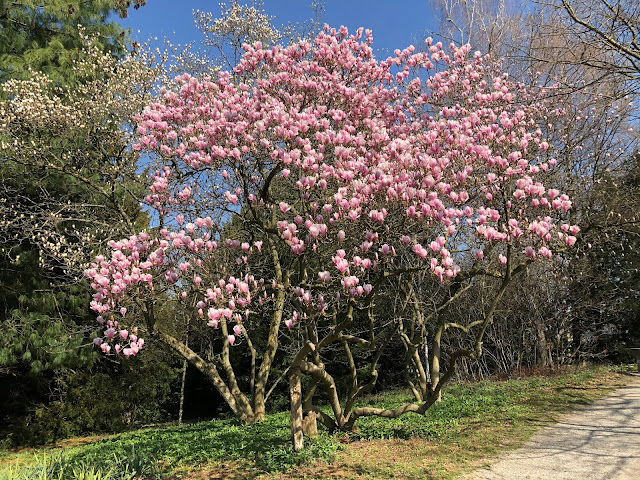 It was so nice to get out on a sunny spring afternoon, and even though people are supposed to stay at home completely, we were enjoying this so much. Yes, even the youngster said he liked it.

Later we learned that at the Seepromenade (Zurich's beach walk) and the Niederdorf (the fun mile) there were tons of people not giving a f*** about social distancing, and no thanks to them our federal council was going to debate on a curfew the next day. 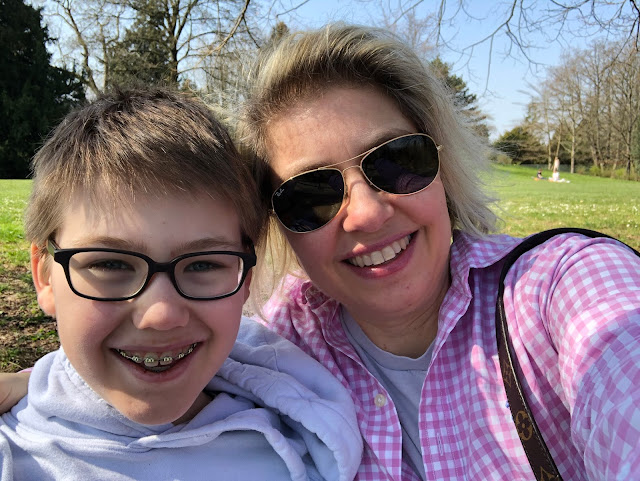 When we picked this 2,000 square km (790 sq mi) African island nation in the Indian Ocean, I knew I was going to need Zee's help. She's a fellow writer (and food lover), and she sent me this recipe:

When we first talked about my project, she said luckily there weren't any corona patients in her country. Sadly this has changed only a few days later, and Zee and her family find themselves self-quarantined.

Through our project we found out that Mauritius' government provides free basic healthcare for its citizens. It doesn't stop there, though. Up until a certain level schooling is free, too, same goes for public transportation for students, senior citizens and disabled people. Way to go!

Zee sent me pictures of their gorgeous beaches. This one is called Grand Baie. Yes, French is one of the many languages spoken there. 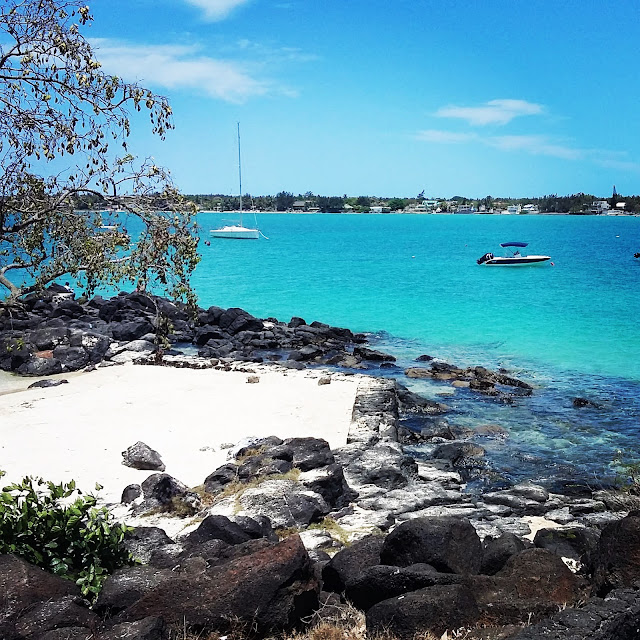 Speaking of water, have you seen pictures of Venice, Italy? Since there is much less boat traffic at the ports and canals, sediment won't come to the top of the water's surface but stays on the ground, which makes the water look super clean. Swans are enjoying it. Obviously the videos of jumping dolphins were not actually taken in Venice but Sardegna, which is almost 500 miles away.

I do believe, however, that this lockdown allows nature to reboot and heal. Air traffic has decreased to a minimum, former commuters work now from home, there are barely any traffic jam notifications.

Of course the downside is the economy is suffering badly. Switzerland depends heavily on tourism. The month of March until the Easter weekend is usually high season for the ski resorts. They are now empty. The Geneva international motor show, as well as the Baselworld (watch and jewellery fair) were canceled, same goes for the ice hockey world championship that was supposed to be held in Zurich and Lausanne this year.

PS: no complete curfew for Switzerland, but a firm statement and vigorous action across strolling promenades: police sent people home, and city workers collected chairs and tables and closed parks.

My heart was heavy on this day. We haven't been to North America last year, and it's hard to make plans for this year as well.

Good thing we have plenty of sweet memories to reminisce about.

In spring 2016, a dear Starbucks friend got married in Seattle. As there was no way I could get Colin off school, I went alone and took the opportunity to touch down in California first and meet up with several friends. 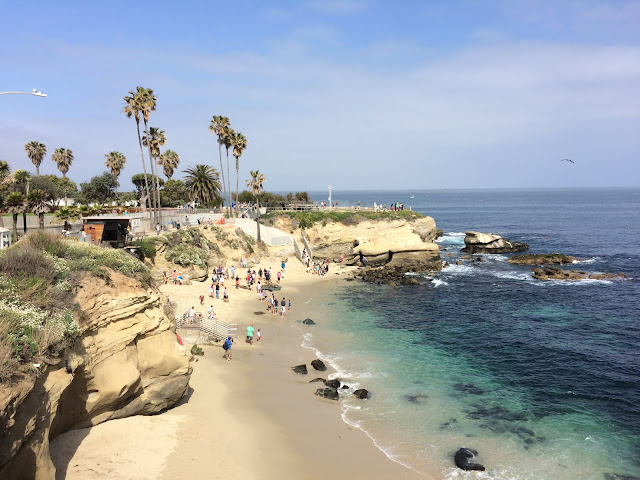 Downtown San Diego, just around the corner from Horton Plaza: 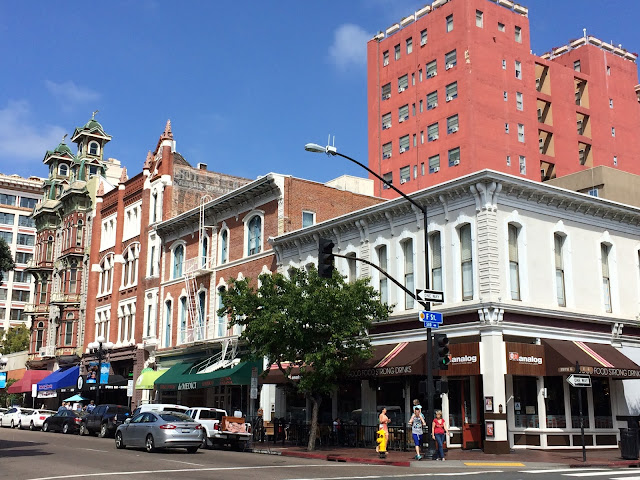 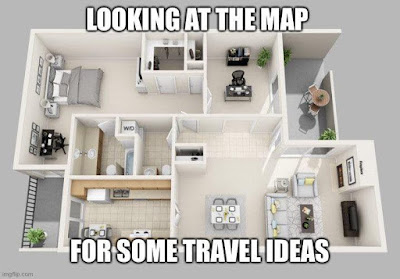 Colin brushed up on his NASCAR knowledge... 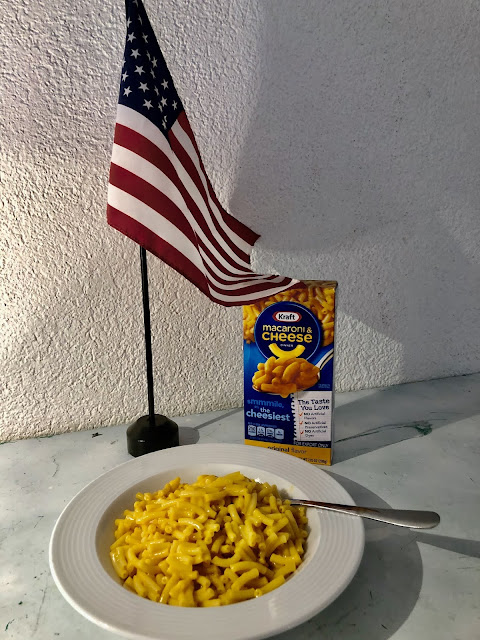 ...and built his own burger 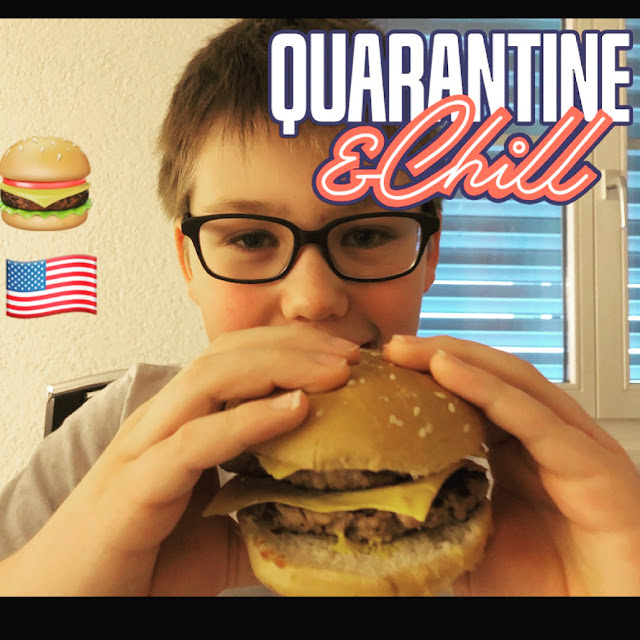 Party time! Play this while reading:

Now imagine you were here and you sipped this mock mojito with us: 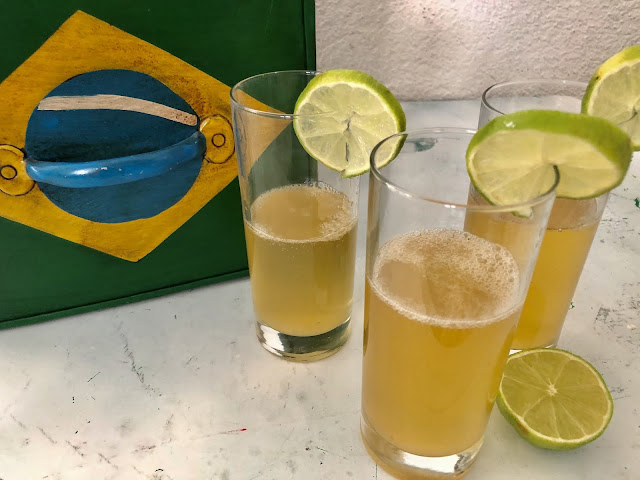 We were also talking about pineapple and why production is not sustainable. We do love to eat them, though, so when we do we will enjoy them all the more.

Many years ago hubby and I ate at a Rodizio style Brazilian restaurant. The kind that has servers walking around offering guests from their meat skewers. Don't shoot me, the meat was tasty, but what I loved best was when they started serving grilled pineapple. So yummy!

Thank you for being part of our first week. Keep your eyes open for an update. Same blog, same uplifting spirit. Alright?